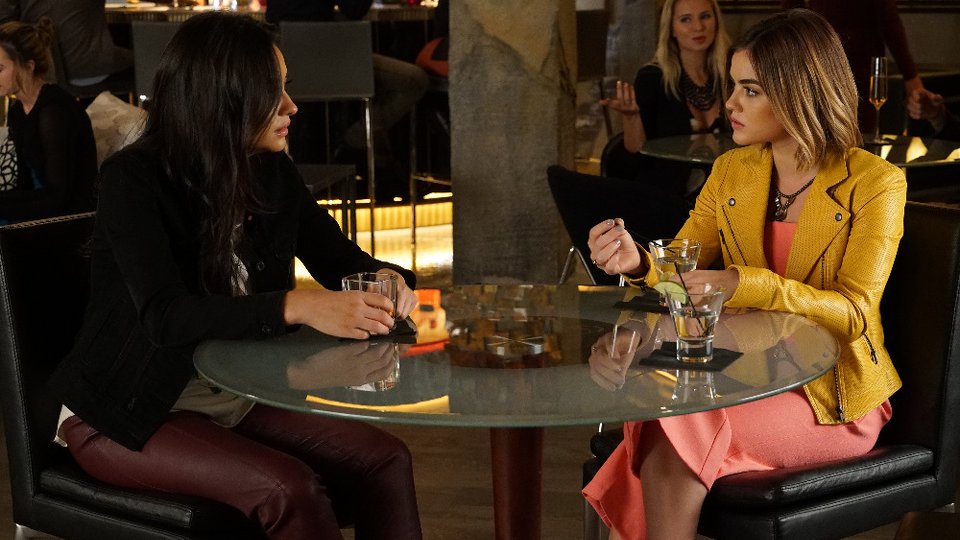 Two of the Liars received information they’d rather not have heard on this week’s episode of Pretty Little Liars.

If you haven’t seen the latest episode of Pretty Little Liars and want to avoid spoilers then stop reading now. If you have seen it and want to relive the action, keep reading.

Aria (Lucy Hale) and Spencer (Troian Bellisario) continued to explore the secret passage they found in Sara’s (Dre Davis) room at The Radley. It led down to parts of the old Radley that were still intact. They found a file cabinet that was covering up another secret passage leading to a room with the same torture device in it that was used against them in the dollhouse. Hanna (Ashley Benson) accompanied Aria for a further investigation later where they found Emily (Shay Mitchell) doing some investigating of her own.

What did Caleb (Tyler Blackburn) find in the Hastings research on Yvonne’s (Kara Royster) phone? We didn’t have to wait to long to find out this week and the news wasn’t great. Caleb informed Spencer that the opposition were planning to leak documents to the press about Veronica’s (Lesley Fera) battle with breast cancer, something Spencer knew nothing about.

Spencer’s first port of call was to question Mona (Janel Parrish) about her part in Yvonne leaving her phone after their lunch. The deceptive Mona came clean (we think) and admitted she set it up but assured Spencer that she was trying to help her prevent the documents being made public.

Caleb also paid Mona a visit and threatened to take her apart ‘piece by piece’ if she was messing with Spencer. Mona brought out her feisty side and asked Caleb who was the better kisser out of her, Hanna and Spencer. Ouch!

Not so egg-cellent news

Emily’s fears about Sara’s appearance at the hospital after her egg donation plagued her this week. Still unable to figure out if Sara was actually there or not, Emily had an appointment with the clinic to check that everything was OK. When she arrived it was closed and after banging the door down, Emily was told that the power to the freezers was disabled over night and her eggs, along with around 30 others, were destroyed.

Hanna was stuck between a rock and a hard place this week. After a romantic getaway with Jordan (David Coussins), Hanna panicked when a surprise breakfast arrived that threatened to cause harm to her fiancé. She told Jordan they needed to go back to Rosewood and used Emily as her reason for staying. Jordan told Hanna to think about what she wanted and warned her that if she went looking for trouble she would likely find it.

A quick drink with Caleb, which led to a few longing looks and a flashback showing the gradual disintegration of their relationship during the five-year time-jump, gave Haleb fans hope that the couple may not be done entirely.

Aria received a surprise this week when Liam (Roberto Aguire) arrived in Rosewood with no advanced warning. He claimed he was there to see her and to take a look at the next set of pages from Ezra (Ian Harding). After reading the latest pages, Liam confronted Aria telling her that he knew it was she that had written them. Aria tried to lie her way out of it but came clean when she realised that she couldn’t.

Alison (Sasha Pieterse) and Dr. Rollins (Huw Collins) battled about the public status of their relationship. Eventually Ali came clean to Spencer, who pointed out that the relationship was inappropriate, but undeterred Ali asked her new lover to go public with her. He was reluctant but judging from the fact Ali was calling herself Mrs. Rollins in the flash-forward at the end of the mid-season finale, I’d guess he doesn’t put up much of a fight for long.

The return of the Fitz

Ezra finally returned to Rosewood and came clean to Aria about what happened the night that Charlotte (Vanessa Ray) was murdered. It turns out he had seen Byron (Chad Lowe) and Ella (Holly Marie Combs) getting cosy and they begged him not to say anything to Aria. Understandably Aria was furious that he would rather let her believe he was am murderer than tell her the truth and he apologised to her.

The murder weapon is…

It turns out that the golf club was just a decoy and that the actual murder weapon was a hollow metal rod with a rectangle on the end. What could that be we wonder? Well Tanner (Roma Maffia) was back and questioning everyone she came across but it was Spencer who solved the puzzle. After being asked to retrieve a flight number from Melissa’s (Torrey DeVitto) suitcase, she found one of the poles that forms the handle missing and it perfectly fitted the description of the murder weapon.

Pretty Little Liars continues Tuesday 8/7c on Freeform in the US and Wednesday on Netflix in the UK. Watch the promo for the next episode We’ve All Got Baggage below: