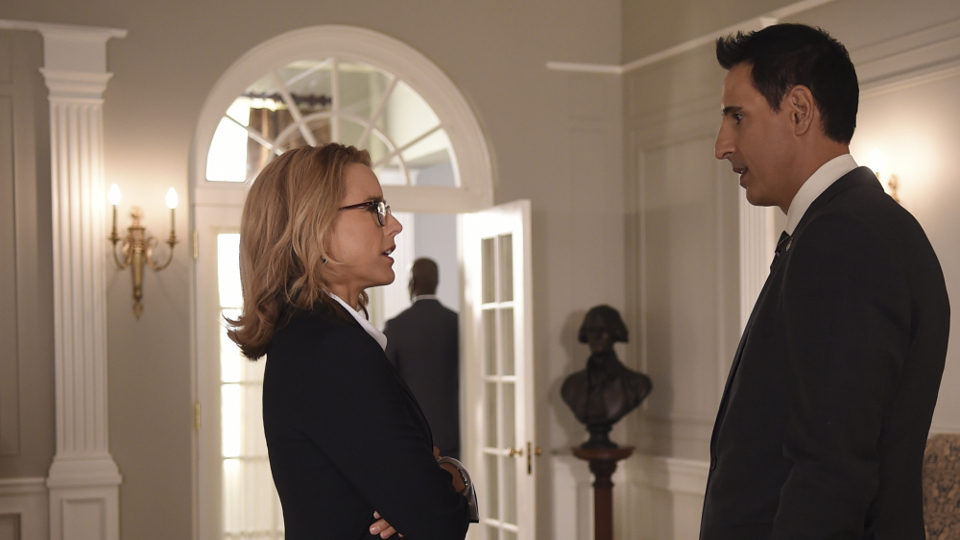 In the latest episode of Madam Secretary, Elizabeth (Téa Leoni) was faced with trying to find a diplomatic solution with Russia following the death of President Ostrov.

The President called Ostrov’s wife at the start of the episode to offer his condolences and to let her know he would be sending Elizabeth to attend the funeral. His new hire Craig Sterling, NSA head, felt the death was an opportunity to push their own agenda by supporting the Ukraine with military aid. Elizabeth and Sterling simply don’t get along so she set to work or handling things her way.

Her plan involved getting the Ukraine and Russia to try and end their war. To help with this she called on her friend Anton Gorev who is the Russian Foreign Minister. It’s a risky move for all involved but eventually they all go for it.

Things appeared to be going well until Elizabeth’s assistant Blake innocently had his picture taken with a young girl and her father. It turned out that the man was anti-Russian and it’s all part of a plan by Ostrov’s wife to make Elizabeth and Anton look bad. It plays out perfectly for her and takes the American’s by surprise leaving relations between Russia and the US particularly strained.

It also put Elizabeth in an awkward situation as the President deemed her misson a complete failure. Which in turn works out well for Sterling pulling him closer to the President as Elizabeth is beginning to be squeezed out. We expect more fireworks between these two over the coming episodes.

Meanwhile Henry (Tim Daly) was told to put Dmitri to the test which involved giving him his first proper assignment. This involved sending Dmitri to the Russian Embassy to try and gather intelligence about who would succeed the Russian President. Reluctantly he agree and managed to spend the majority of the evening getting drunk with the Ambassador.

While there he didn’t learn anything important about Russia’s intentions. Afterwards the DIA staged a fake abduction and interrogated Dmitri as a way to evaluate his readiness for further missions. Dmitri didn’t crack but he was clearly not happy and trashed his dorm room looking to see if he was being spied on.

Elsewhere we learned that the previous hack on Air Force One was more serious than imagined. The unknown hackers didn’t just access the computer systems, they actually had full control of the aircraft. It feels like a threat of something bigger for a future episode.

Finally, the McCord’s son Jason tried out for the school football team and surprised his family by landing a position as linebacker. His main reason for joining the team was to try and make some decent friends. We expect this story will also be continued.

The fourth episode of season two is Waiting for Taleju. On the heels of the debacle with Russia, Elizabeth finds herself pushed out of the President’s inner circle. Also, when incriminating photos of Stevie and Harrison surface, Elizabeth and Henry must deal with the aftermath and try to protect their daughter.