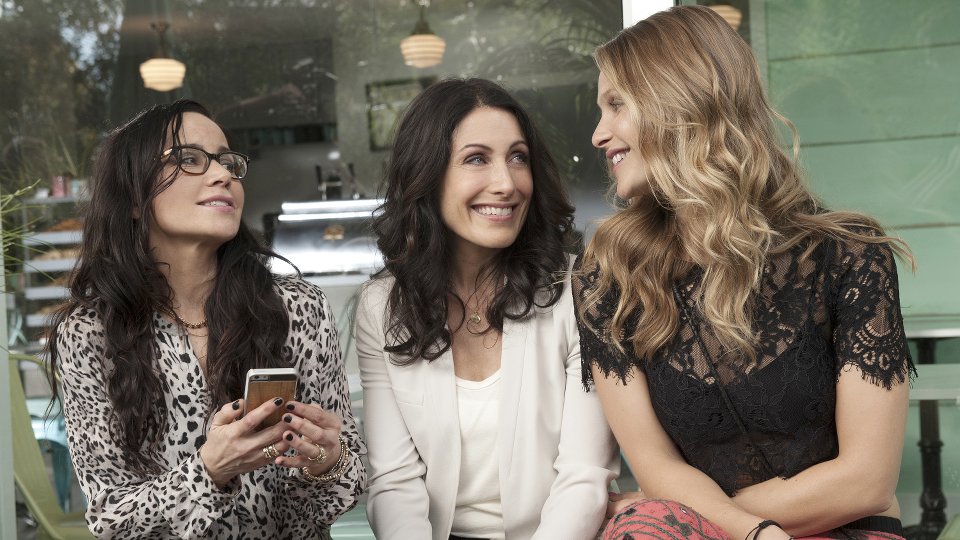 Self-help author Abby McCarthy (Lisa Edelstein) finds herself at an unexpected crossroads when she reveals that her latest book is a lie during a public appearance and admits that she is about to go through a divorce. That emotional outburst sets off a chain of events that makes Abby take another look at her life and puts her career in jeopardy as her audience begins to question her credibility. She is helped along the way by her divorced friends Phoebe (Beau Garrett) and Lyla (Janeane Garofalo), who help her get her life back together and her career back on track.

Girlfriends’ Guide to Divorce is based on the book series by Vicki Iovine and was developed for television by Marti Noxon (Buffy the Vampire Slayer, UnREAL). In the US the show was the first scripted series for Bravo and its success led to a season 2 renewal. Essentially the show is like a cross between Sex and the City and Mistresses with an edge that makes the show a little bit more adult than you might expect. At the heart of the series is Lisa Edelstein’s Abby, a woman pulled in many different directions while trying to look after her family, maintain a career, and go through the motions of a not altogether amicable divorce with her estranged husband Jake (Paul Adelstein).

In the first episode of the season it is revealed that Jake has been seeing a much younger woman who is the star of a major tween TV show, so Abby tries to throw herself back into the dating scene and meets Will (Warren Christie), a man she is deeply attracted to but is considerably younger than she is. As Abby tries to navigate life after marriage, she looks to her friends Phoebe and Lyla for help but each has their own issues. Phoebe is a free spirit that moves from lover to lover bypassing convention and Lyla is going through a very bitter custody battle with her ex-husband.

What really elevates Girlfriends’ Guide to Divorce is the stellar performance from Lisa Edelstein. I knew she was a great actress from her time on House opposite Hugh Laurie, but in this show she really finds her groove. It’s refreshing to see her playing a more rounded character, and you can tell she’s relishing having a bit of fun. Edelstein makes Abby a character you can relate to and you feel every single up-and-down she has. She’s perfect at the more comedic moments too and one scene involving nakedness and a window is one of the best in the season.

Edelstein’s supporting cast is solid too. Beau Garrett is perfectly flighty as Phoebe and Garofalo is a force to be reckoned with as straight-talking Lyla. Necar Zadegan, who plays Abby’s divorce attorney Delia, is the show’s scene-stealer and her presence increases over the course of the first season. Also worthy of note is Paul Adelstein, who ensures that Jake isn’t a two-dimensional character and stops him from becoming a cliché.