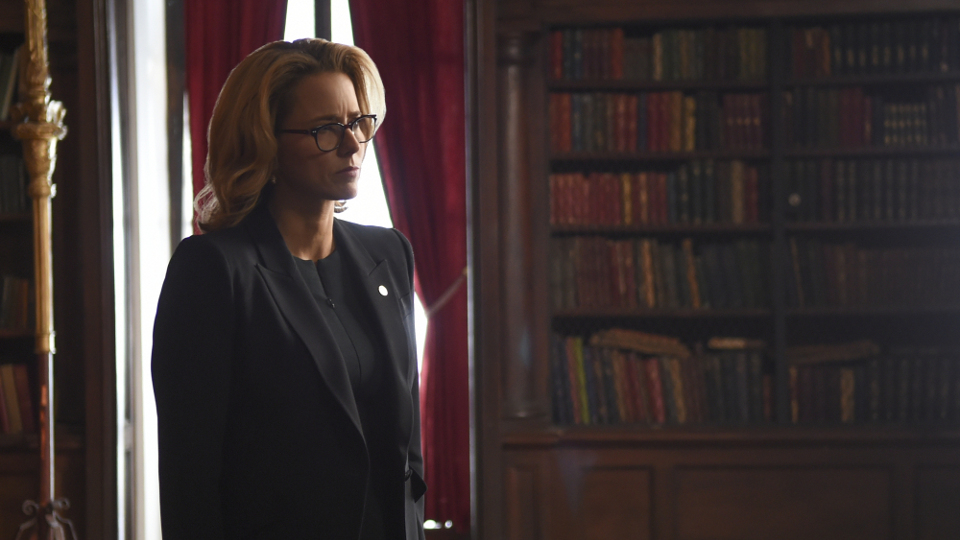 In the latest episode of Madam Secretary, Elizabeth (Téa Leoni) was faced with negotiating the safe return of a State Department employee who was kidnapped in Afghanistan.

During the crisis Elizabeth received advice from former Secretary of State Madeleine Albright (she was actually Bill Clinton’s Secretary of State) who gave her the confidence to strike out and do things her own way when necessary. President Dalton (Keith Carradine) had given his recommendation on how to handle the situation which was not to negotiate. However she chose to ignore the order and was more proactive in handling the situation thanks to her conversation with Madeleine.

She decided to speak to the kidnappers who were trying to force America’s hand due to broken promises. They threatened to kill the hostage unless their families were relocated to the safety of the United States. It was a big risk for Elizabeth that could have gone very wrong but it turned out to be the right play. The employee was safely extracted but the kidnappers lost their lives in a gun battle with the Taliban when the President refused to put his men in danger to help them.

Elizabeth’s husband Henry (Tim Daly) was pushed again by the CIA to find a way to persuade his student, Dmitri (Chris Petrovski), to spy for the U.S. government. Henry was more than a little uncomfortable with the idea and it looked like the mission was over before it began when Dmitri announced he was leaving due to his sister falling ill. However Henry was able to promise life-saving drugs for her should Dmitri defect and become a spy. Eventually Dmitri gave in and reluctantly agreed.

Elsewhere in the episode the McCords tried to force their daughter Stevie (Wallis Currie-Wood) to talk to her boyfriend Harrison over the Heroine stash she uncovered. They wanted him to confess to his father, who happens to be the president, about the drugs. When she disappears off for the day Henry tackles the problem himself by talking to Harrison.

During the episode the Russian President Ostrov had gone missing and there was much speculation to his whereabouts. As the episode came to a close it became known that Ostrov had died which could mean big changes between the US and Russia.

The third episode of season two is The Rusalka. In the wake of Russian President Ostrov’s death, Elizabeth faces off with his wife Maria, who accuses her of conspiracy against Russia. Also, Henry puts Dmitri to the test, and Jason tries out for the football team.