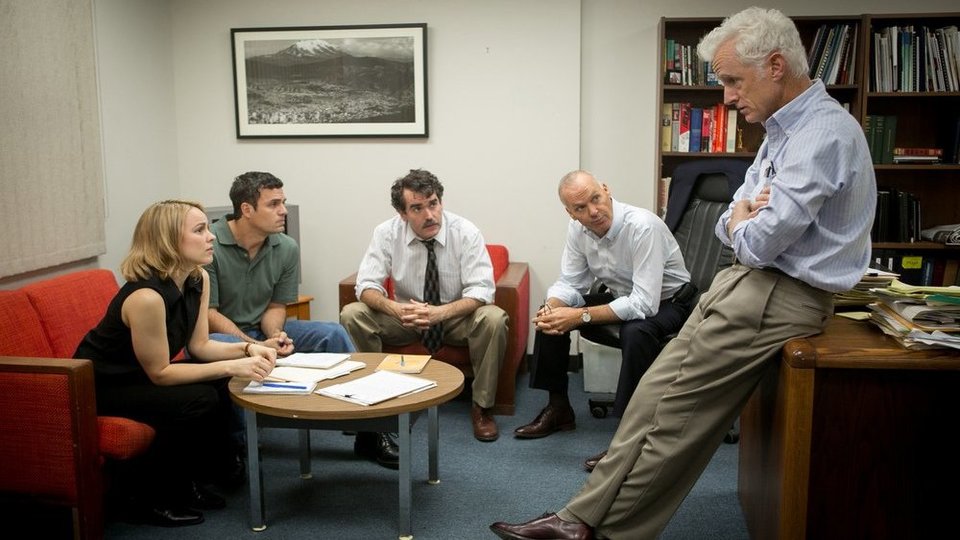 The Boston Globe’s investigative branch led by Walter ‘Robby’ Robinson (Michael Keaton) begin uncovering one of the biggest abuse scandals ever found within their local Catholic Archdiocese. Collecting testimony from victims along with hidden facts that stretch across decades, The Boston Globe uncovers shocking revelations that must be challenged head on.

If you ever thought that they don’t make hard-hitting dramas like they used to in the 70s and early 80s then look no further than director and co-writer Tom McCarthy’s deeply moving film. Chronicling the true story of The Boston Globe uncovering one of the biggest abuse scandals ever found within the local Catholic Archdiocese, this is proper film-making of the highest order.

A stellar ensemble shines here with Michael Keaton, Rachel McAdams, Brian d’Arcy James and Mark Ruffalo on fine form as investigative journalists who unearth the horror. It’s great to see Michael Keaton getting the roles he deserves, especially after his Oscar nominated turn in Birdman last year. Mark Ruffalo really shines here too, especially during an empowering speech where Mike Rezendes’ anger and disbelief at the atrocities that are uncovering can’t be bottled up any longer.

Liev Schreiber, Stanley Tucci, John Slattery and Billy Crudup provide stellar support and give the film quality performances throughout for one of the best ensembles of the year. Tucci in particular is brilliant and shares a great dynamic with Ruffalo. Crudup, an unsung hero in so many of his films, hands in a memorable performance that reverberates across the entire movie.

Spotlight is a must-see drama. It’s a disturbing but utterly compelling story that had massive ramifications on the local community, Boston at large, and the greater crusade against this abuse. It’s a story that shook the world and to see how it all came together is both interesting and fascinating. Spotlight rightly deserves its awards season accolades.

Watch the trailer for Spotlight below: