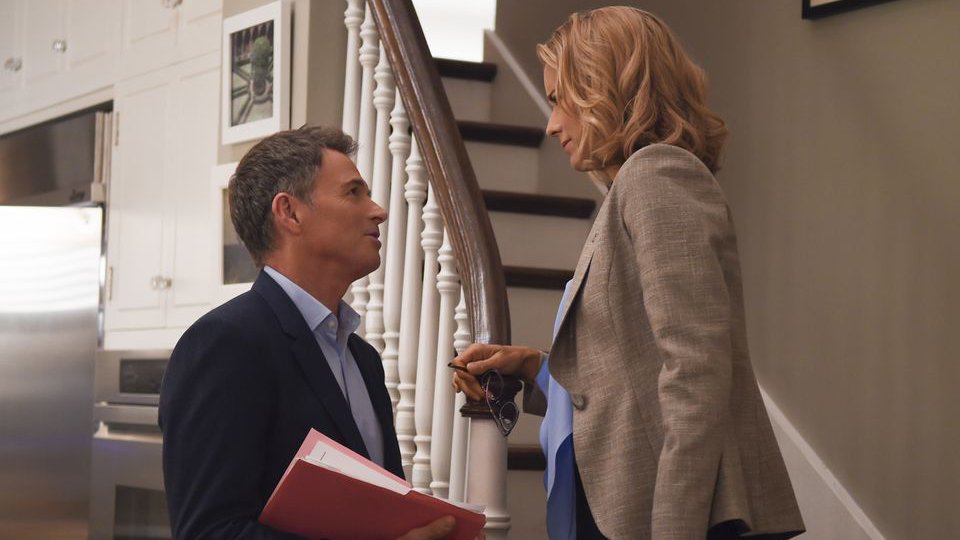 The season two premiere of Madam Secretary saw Elizabeth (Téa Leoni) sworn in as acting President when Air Force One went missing over the Pacific.

Normally the Secretary of State wouldn’t be next in line for the Presidency but the Vice President is taken ill, Senator Gates is ruled unfit and the National Security Adviser is retiring. So it fell to Elizabeth to step up and lead the country. She was sworn in by Chief Justice Frawley (Morgan Freeman).

While Elizabeth was trying to get to grips with the huge task at hand her husband Henry was called in by the Defense Intelligence Agency. He made a deal last season when he took his National War College job. The DIA wanted him to get close and assess one of his students in the hope of recruiting him. Henry didn’t feel they had picked the right student for the job and suggested an alternative.

In the end it turned out that Air Force One was suffering communication issues due to a sophisticated Malware attack. President Dalton and everyone else on board were safe and the stricken plane was escorted to the ground.

Elsewhere in the episode it was the Pacific Rim Economic Forum talent contest and Elizabeth is expected to put on a performance with her team. She’s tone deaf and has a panic attack when the time comes but her team come to the rescue with an impressive rendition of Billy Joel’s ‘For The Longest Time’ complete with a political spin.

The second episode of season two is The Doability Doctrine. After Elizabeth receives advice from former Secretary of State Madeleine Albright, she chooses to ignore President Dalton’s recommendation on how to negotiate the safe return of a State Department employee who was kidnapped in Afghanistan. Also, Henry must find a way to persuade his student, Dmitri (Chris Petrovski), to spy for the U.S. government.