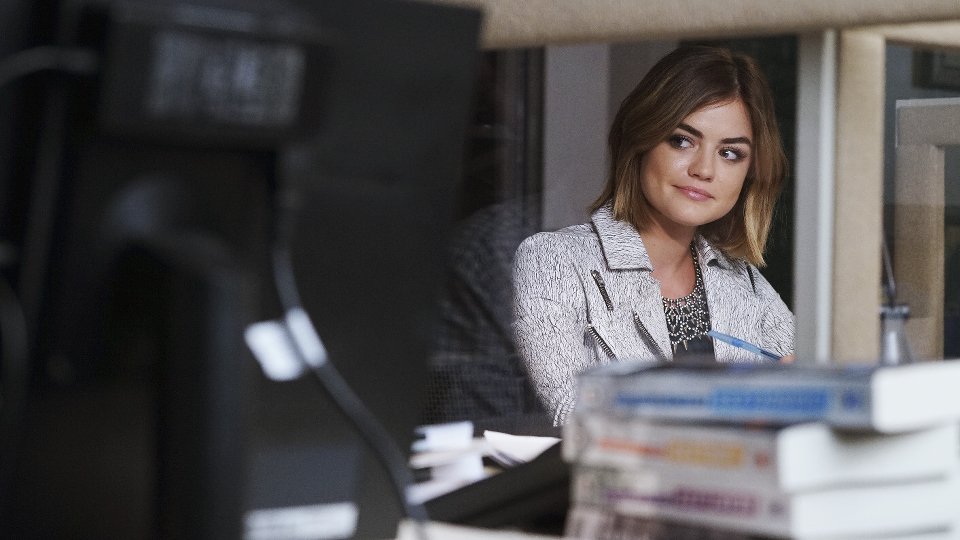 The finger of suspicion turned towards one of the liars as the mystery of Charlotte’s death took its toll on this week’s Pretty Little Liars.

If you haven’t seen the latest episode of Pretty Little Liars and want to avoid spoilers, we suggest you stop reading now. If you have seen it and want to relive all of the action then keep reading.

Aria in the middle

Aria (Lucy Hale) found herself the centre of her friends’ suspicions when it came to figuring out who killed Charlotte (Vanessa Ray). As the liars started discussing Charlotte’s death, they all insisted that they knew nothing about it. Hanna (Ashley Benson) was less than certain though and tackled Aria telling her that she knew she’d left the hotel the night of the murder. Aria tried to talk her way out of it but Hanna knew she was being lied to.

In a bid to cover her tracks Aria visited Ezra (Ian Harding) and pleaded with him not to tell anyone that they were together on the night of Charlotte’s murder. He agreed to keep quiet but Aria’s hope of keeping their meeting secret was dashed when Hanna revealed to Spencer (Troian Bellisario) and Emily (Shay Mitchell) that Aria could have played a part in the murder. They accessed the security footage from that night and saw that Aria left The Radley at 3am and didn’t return until 4.30am, half an hour after Charlotte’s time of death.

Aria’s shifty behaviour didn’t help her case either as she left Rosewood as soon as she could after the funeral, then came back without telling anyone only to be spotted going to Ezra’s by Emily.

Together they decided to confront her and Aria told them the truth. She met with Ezra as she couldn’t sleep and the two took a walk around Rosewood. As they were parting they saw Charlotte heading into the church. Aria got into a taxi to go back to The Radley and Ezra assured her that he was heading home. Aria admitted to her friends that Ezra can’t look her in the eye when he’s lying and revealed that she asked him in a roundabout way about Charlotte’s murder and he avoided eye contact with her.

Hanna made a decision to erase the security footage so that Aria wouldn’t be named a suspect in the murder but we have a feeling that decision is going to come back to bite her in the backside. Meanwhile Alison (Sasha Pieterse) was angry to discover that Sara Harvey (Dre Davis) was no longer a suspect in the murder and told Lorenzo (Travis Winfrey) that her friends could have had involvement on her sister’s murder!

Devastated by Charlotte’s death, Alison (Sasha Pieterse) decided to hold a dinner party inviting all of her friends, except Aria who had gone back to Boston and stopped returning her calls. During the evening things got awkward as Hanna’s fiancé Jordan (David Coussins) met Caleb (Tyler Blackburn) for the first time and Emily was almost caught out in a lie during a conversation with Hanna. Things went from awkward to unbearable when Alison said grace before dinner and indicated that she knew her friends were hiding information from her about Charlotte’s death.

That spark we felt between Spencer and Caleb last week may just have legs. The two spent a large portion of the episode together and reminisced about bumping into each other in Madrid three years earlier, reconnecting and spending a summer together. To my ears it all sounded pretty romantic and it’s clear that there’s something going on between the two. Whether or not they’ve acted on it remains unclear but I think it’s heading that way. It does seem that Caleb still has feelings for Hanna, and vice-versa, so things are going to get a bit awkward.

Caleb also helped Spencer when a campaign started online linking her to Charlotte’s murder. He found the source and started to try and reverse opinion by claiming she was being unfairly bullied online. Spencer’s fears of being caught up in the murder led her to dig out an old paper she’d written about a real life murder case that mirrored the way Charlotte had died. She told her friends that she’d shared that news with Ezra and wasn’t convinced that he hadn’t killed Charlotte.

To publish or not to publish?

Aria’s return to Boston was more intense than she’d hoped when she had to tell her boss that Ezra was considering giving his advance back and not delivering his next book. After being called into a meeting, alongside her colleague and current squeeze Liam (Roberto Aguire), Aria was devastated when she was taken off Ezra’s project and replaced by Liam. She pleaded to be given another shot but her boss felt that maybe Ezra didn’t take her seriously as she’d previously been his student (and oh so much more!). In a bid to prove her worth Aria flew back to Rosewood and headed straight to Ezra’s. She got the manuscript off him but he assured her that the publisher wouldn’t like what he’s written. On the memory stick Aria found lots of information about the attack on the humanitarian workers that resulted in the loss of Nicole (Rebecca Breeds).

Keeping up with Emily’s lies was exhausting this week. She pretty much lied to everyone she talked to including her mum Pam (Nia Peeples) and her friends. Continuing to keep up appearances of enjoying a successful career, Emily was caught out by The Brew boss Sabrina (Lulu Brud) who saw her leaving Hollis Medical Centre. The two bumped into each other as Emily tried to pay for her parking only to have her credit card rejected. Sabrina guessed that Emily was battling cancer and tried to convince her to reach out to her mother and her friends. She didn’t take that advice and dodged a few difficult questions from Pam whilst digging a deeper hole for herself. Emily visited her father’s grave and told him that she flunked out of college after struggling following Charlotte’s reign of terror. As she wept and told him she would turn things around, Emily saw Sara at Charlotte’s grave.

Pretty Little Liars continues Tuesdays 8/7c on Freeform in the US and Wednesdays on Netflix in the UK. Preview the next episode, The Gloves Are On, below: