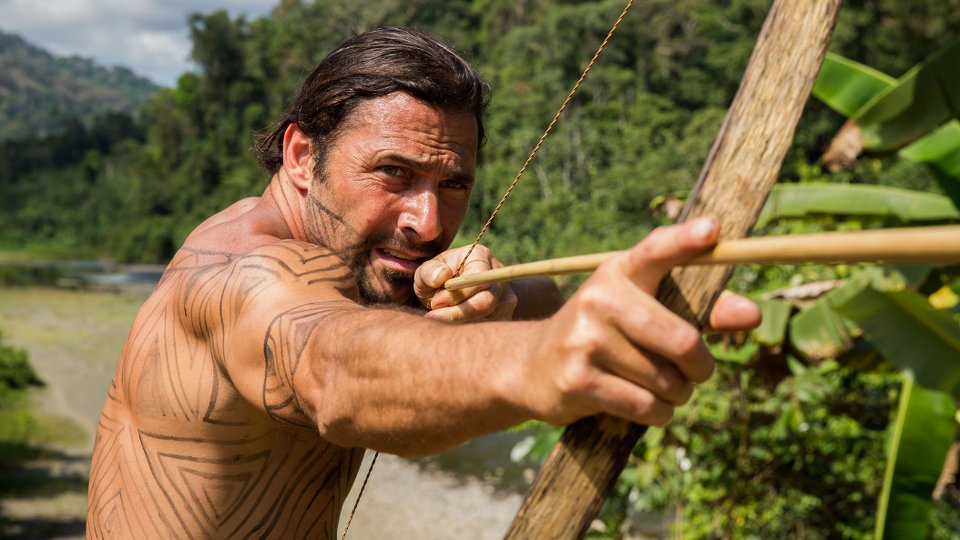 Hazen Audel is a man of many talents and lists survival instructor, jungle guide and high school biology teacher amongst his credentials.

Having spent the last 20 years embracing life with indigenous groups and navigating extreme terrains, Hazen faces his biggest challenge yet in his new National Geographic Channel show Primal Survivor. Hazen travels to some of the most extreme places on the planet, this time to take on solo challenges that will push him to the limits of his knowledge, endurance and skills.

We caught up with Hazen to find out more about Primal Survivor, talk about how he prepares for the incredible challenges he takes on, and to find out if he’s afraid of anything.

Hi, Hazen. How are you? Where does this Q&A find you?

I’m in my hometown where I grew up. It’s winter outside, so I just made a fire, and me and my cat are huddled around the fireplace trying to stay warm and seeing if my cell phone has enough charge to be able to finish this conversation.

Your new show Primal Survivor kicks off this week. What do we need to know about it?

This is a unique show. There’s no other show like it. With or without me, it’s the one show that I would want to watch. I really think that it makes TV viewing valuable again.

It’s an incredibly difficult show to produce, and we’re going to some of the most remote places in the world. In a lot of these places, these people have never really been highlighted or showcased ever before, and they live these very, very incredible lives.

It really takes a good look at how different people around the world live their lives differently from anybody that’s watching the television. I think it’s important for the rest of the world to see how these other people make a go at life. This is what this show is about.

How did you prepare mentally and physically for the challenge of making this series?

Fortunately, I’ve been preparing for a show like this my entire life because my entire life, I’ve loved animals and plants and the natural world. Every day of my life I’ve spent keeping my eyes and ears open to learning more about it. It’s what gets me up in the morning in a lot of ways.

This show is me doing exactly what I’ve always dreamed about doing. Being around wild animals and wild places, and I’m with wild people that are there to show me even more about these things that I’m fascinated by. That, alone, has been probably the biggest thing to prepare me for something like this.

The other things that have really prepared me for this is just my own experience living in very demanding, hot, tropical jungles and really, really remote deserts and some of the coldest places on earth and just having my own personal experience with that has toughened up my heart to be able to take on more adventures like that. So, yes.

Did you have any moments during filming, where you thought you wouldn’t be able to continue?

So I climbed up this volcano with a pair of homemade sandals, which is what the Maasai would be wearing. I just had a shuka, which is almost like a sarong, and I just had a t-shirt. I’m climbing up a volcano that eventually gets up the snowline, and it was so incredibly cold up there that I had just enough time to make my offering to the very top of this volcano and then get down in time without dying of hypothermia.

That was one where I thought I couldn’t go any longer. When I walked across the Darién Gap in Panama, my feet were so tore up and infected that I don’t think I could have taken many more days out there. I think my illnesses were getting exponentially worse every day, and the same thing was going for the rest of the film crew. So that was a really demanding trip on people’s health.

But when you compile all of the tropical experiences when it went from Sulawesi to Panama and then to Irian Jaya, my entire body was basically at its end, as far as it was just so exhausted from trying to fight off diseases, and fight off infections, and keep myself healthy. I recognized at that time in my life that I need to have some time to recuperate, or else I’m going to succumb to one of these diseases. Fortunately, I had a break in the filming season.

What was your favorite place to visit for the show, and why?

Hazen I don’t have a favorite place because every single place has its own amazing things to offer, and they can be so different. But I can say that I’ve had my mind set on traveling and exploring in Laos, and seeing the tropical fish that live in the Mekong River, and I’ve always dreamed about going and seeing some of the cultures in Papua New Guinea.

Having those two locations be exhibited in this new series of Primal Survivor, it was like checking off two really big great things that I had on my bucket list. So I was really prepared to be enjoying those experiences of those two locations. So, they stick out in my mind as far as that goes.

You’ve done some remarkable things in your career. What would you say has been your toughest challenge to date?

Now, I’m so much better prepared, but that was one of the most places—well it is considered one of the most remote places in the world and I was doing biology research on leatherback sea turtles and wild pigs. There was just a series of events that got me stuck on this remote island, and there was no one there to pick me up and I was having to learn, almost on my own, how to live off the land for a month and keep myself alive.

During that time, I had developed really severe staph infection, so I was needing to hunt and fish every day, yet I could barely even walk and I had no access to the outside world. I couldn’t tell my family that I was in such danger, and I had to live with those thoughts every day for over a month.

That was the hardest thing that I ever had to go through, but what doesn’t kill you makes you stronger, and I definitely carry experiences like that with me every day, and it helps me really understand what a truly difficult situation is, or a situation that’s merely an inconvenience.

Does anything faze you or are you pretty fearless?

Well, I’d say that I sway on the scale toward fearless, but I think it’s just because I’m very realistic, and I have a better idea of my limitations and what true dangers are better than most people out there. So it’s easy to live a life of fear and fear every single thing that has six legs or more and I’m past that.

Those sort of things never scare me because I’m more interested in learning about them than being scared with them. I understand that I live in a world that is full of fear, and fortunately, I know that I can live a life where I don’t have to be fearful of things; I can just be realistic about things.

What advice would you give to someone who wanted to follow in your footsteps?

Have you had any thoughts on what your next challenge will be?

Well, I think some of my next biggest challenges are going to be things that I don’t necessarily know how to navigate. I would say some of my next challenges that I’m really invested in right now are more on the aspect of how am I going to plan, how can I be smart enough to make things happen?

But I think I recognize that this new generation of influential people that live in the United States, basically are kids. Don’t really have anybody that is educating them about nature, making them interested in nature. Making them love to be outside. I think right now, we’re at an era where anything that’s related to the outdoors is a survival show that tells people that being outdoors is comfortable and dangerous and you’re basically putting yourself in a desperate situation and you have do everything you can to get out.

What I want to do is I want to continue being an educator, and teaching things that I’m passionate about. But also I recognize that as much as I’m a teacher, I want to be a lifelong learner. Much of my background is, I come from a Native American heritage, so much of my heritage from Native America. I just see how far removed I personally am from that bloodline that I have.

And yet, as a teacher, I see a lot of Native Americans that are Native American youth that are trying to find their way in life and trying to make this transition from a traditional culture and this sort of culture that is inventing itself every day. That’s sort of the Western culture. It’s really difficult for a lot of people, and I want to try to learn and listen to ways that I might be able to help out with that particular demographic.

Primal Survivor starts Thursday 21st January at 8pm on National Geographic Channel. Watch the trailer for the show below:

In this article:Hazen Audel, Primal Survivor