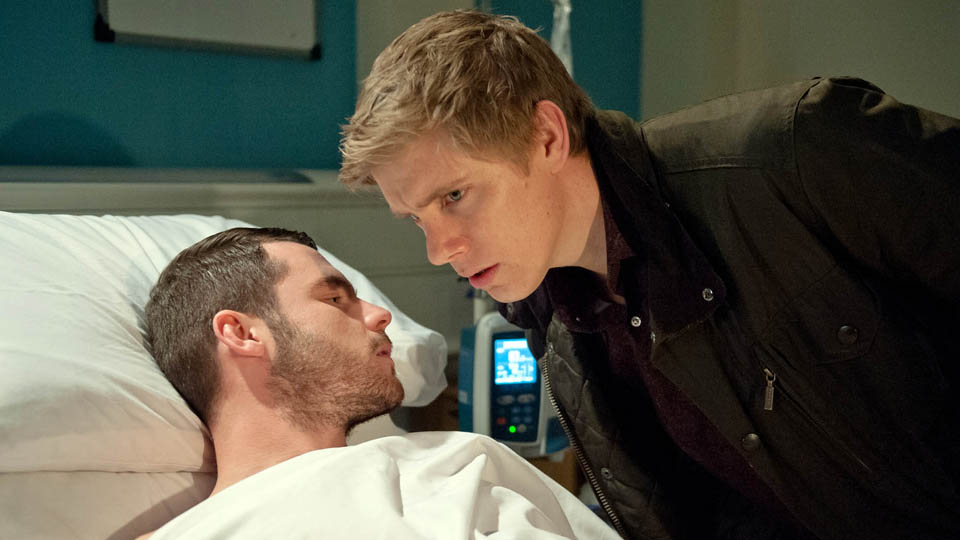 Welcome to our weekly look ahead to what’s going on in Emmerdale.  Read on…

As Chas and Gordon’s secret romance flourishes, he asks her to consider him buying Diane out of the Woolpack.  Chas is like an excited teenager as she lies that she has a dentist appointment, but instead heads to meet Gordon.  Aaron tails Paddy’s car thinking that he’s going to meet Tess again so is stunned when he sees Chas get out of the car and decides to continue to follow her and is angered when he sees who she’s gone to meet.

He confronts his mum over her secret rendezvous and demands that she leave him but she tries to talk him round and thinks she’s succeeded.  Aaron is not happy and sets out to leave Emmerdale behind, however he’s stopped by Robert and soon collapses from sepsis.  Robert figures out that Aaron must have been self-harming again and has a bad infection in one of his wounds.  He gets Aaron to hospital where he whispers something in Robert’s ear leaving him shocked and concerned.

Meanwhile, Chas and Gordon go public on their relationship and Chas tells Diane about Gordon’s offer to buy her half of the pub.  Doug tells Chas that Aaron didn’t come home last night and it sends Chas into a panic.  Back at the hospital, Robert is worried when he sees Aaron’s empty bed despite the fact he hasn’t been discharged.  He heads to the pub to find him and ends up covering to a fuming Chas that Aaron spent the night with him.

When Robert finally tracks Aaron down he is taken aback by the secret from his past that Aaron tells him.  Robert feels out of his depth with the revelation and begs Aaron to talk to his mum but he refuses and swears Robert to secrecy.  Just what is the bombshell that Aaron has dropped and is it linked to his self-harming?  All will be revealed this week.

Nikhil has his sights set on Leyla

After pretending to be Leyla’s boyfriend to get Jai off her back, Nikhil has realized that he does actually want to be her boyfriend and continues his chase this week.  However, the unexpected return of Jacob in the village seems to put a dampener on his plans.

Leyla is thrilled Jacob is staying, but a bit put out that he has chosen to live with David rather than her.  Nikhil seizes the opportunity to lend support to Leyla and soon she’s decided that maybe the pair should go on a date after all.  It seems the signs are good when the pair share a passionate kiss.

Will Priya agree to marry Rakesh after all?

Leyla returns Rakesh’s cheque and says that a wedding isn’t the way to get Priya back. Priya’s stunned when Rakesh admits he kissed Chrissie. Will this be the end for the troubled couple or will Priya reward Rakesh’s honesty?

Rakesh’ son Kirin, is not coping well with his new found fatherhood and is jealous of how easy Adam makes it look.  Soon he is demanding that Adam stay away from his son.  His week gets even more stressful when his dad tells him he’d like to have him by his side when he marries Priya.  Kirin tells Vanessa that it’s time Rakesh faced the music for what he did to the test results, but Vanessa ruins his plans when the police turn up.

Later in the week, Kirin makes peace with Adam and says of course he should still see Johnny and Adam helps show Kirin a few tricks to deal with Johnny.  As he watches Kirin bond with Johnny, Adam makes a heart wrenching decision…

Carly is not happy when Tracy gets a hot date over her.  Tracy manages to persuade Finn to open the B&B for her date with Duncan, but when it’s suggested that they sleep together, Tracy realizes she’s had a lucky escape ad he’s only after one thing.  Next thing, she sees him flirting with Carly and soon the pair are uniting to get revenge on Duncan who it turns out is married!

Ashley tries to get into his old house and is embarrassed when reminded he doesn’t live there anymore.  It gives Laurel an idea though and she asks Cain to rent the place to them.  Will he want to let Debbie’s house go?

Paddy is uncomfortable when Marlon tells him that Tess asked him out for a coffee.