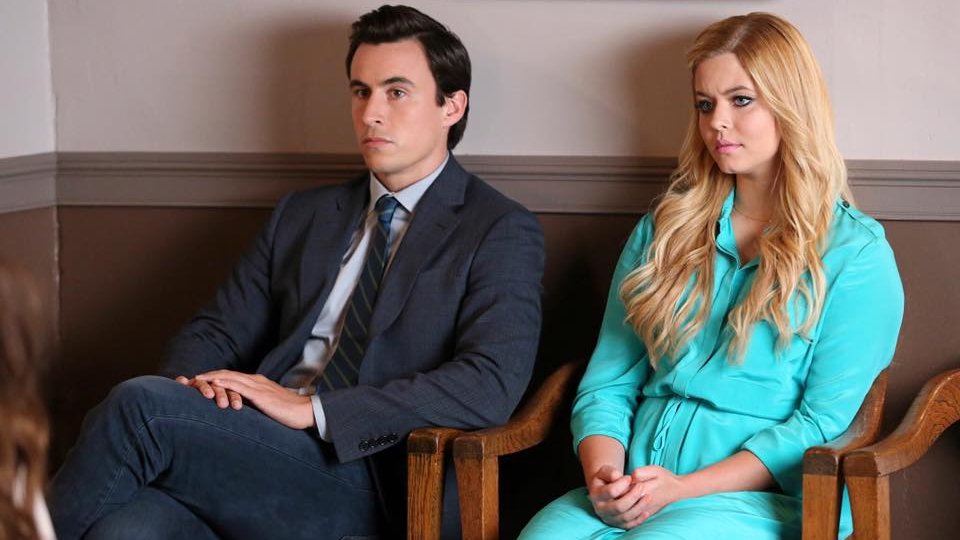 Pretty Little Liars jumped 5 years into the future as the second half of season 6 kicked off in the US last night and the UK today.

If you haven’t seen the latest episode of Pretty Little Liars and don’t want any spoilers then we suggest you stop reading now. If you have seen it and want to relive the action then keep reading.

It’s been 5 years since the events of the ‘A’ reveal and each of the liars has gone down their own paths. Aria (Lucy Hale) moved to Boston to pursue a career in publishing, Spencer (Troian Bellisario) moved to Washington D.C. to climb the politics ladder, Hanna (Ashley Benson) became a jetsetter for a fashion brand, and Emily (Shay Mitchell) seemed to have ditched college and got a job in a bar. Alison (Sasha Pieterse) meanwhile stayed in Rosewood and became a teacher so she could stay close to Charlotte (Vanessa Ray).

In the years that had passed all of the liars’ relationships had broken down with all of them embarking on new ones. Was it just me or is there some suggestion that something may have happened with Spencer and Caleb (Tyler Blackburn)? They seem awfully close all of a sudden don’t you think? Ezra (Ian Harding) had returned to Rosewood after releasing a best-seller and was struggling with the loss of Nicole (Rebecca Breeds) during their time building houses in South America.

Elsewhere Veronica Hastings (Lesley Fera) was running for Senate and Ashley (Laura Leighton) had been instrumental in turning Radley Sanitarium into a boutique hotel and bar called The Radley. Emily’s mother Pam (Nia Peeples) was trying to find love again after the death of her husband.

The truth will set you free

After 5 years of minimal contact with one another, the liars were called back to Rosewood by Alison who wanted them to help her get Charlotte released. Despite a lot of mixed feelings about Charlotte, the liars agreed to help Alison and gave their testimony to the judge. All of the girls said they felt that Charlotte posed no threat to them with the exception of Aria who admitted she was still terrified of Charlotte and never wanted her to be released. Alison was supported by Charlotte’s doctor Owen Rollins (Huw James Collins) at the hearing and even Mona (Janel Parrish) pledged her support to free Charlotte despite admitting to Spencer that she was still having nightmares.

Despite Aria’s damning words, the judge saw fit to release Charlotte from hospital into Alison’s care. Alison informed the other girls of the verdict and they shared their feelings on the news by downing cocktails at The Radley. They all admitted that Aria was the only one who told the truth to the judge but toasted to Charlotte before agreeing they would continue with their own lives away from Rosewood. Emily didn’t tell her friends the truth about what she’d reallybeen doing in the 5 years they’d been apart and she almost got caught out when her bag dropped on the floor revealing a pill bottle. What is she up to?

The next morning the girls woke up to bad hangovers and a frantic call from Alison, who was worried about Charlotte. After arriving home Charlotte went to bed after chatting with Alison for hours but in the morning she was nowhere to be found. Alison begged the liars to help her find Charlotte and they agreed to come to their friend’s aid.

The mystery of Charlotte’s disappearance didn’t take too long to solve as her body was found on the ground next to the church. Lorenzo (Travis Winfrey) and Toby (Keegan Allen) were called to the scene and Charlotte was pronounced dead. As the shock of the latest death in Rosewood hit home to the liars, they had to gather themselves to support Alison at the funeral.

As they took their seats for the service, the liars were shocked to see Sara Harvey (Dre Davis) walk into the church. They didn’t speak to her but Sara did give them some interesting glances as she entered and left the church. After the service the liars looked forward to resuming their own lives but their hopes were dashed when Lorenzo informed them that Charlotte was murdered and that they were suspects. Who killed Charlotte DiLaurentis?

Pretty Little Liars continues Tuesdays at 8/7c on Freeform in the US and Wednesdays on Netflix in the UK. Watch the promo for the next episode Charlotte’s Web below: