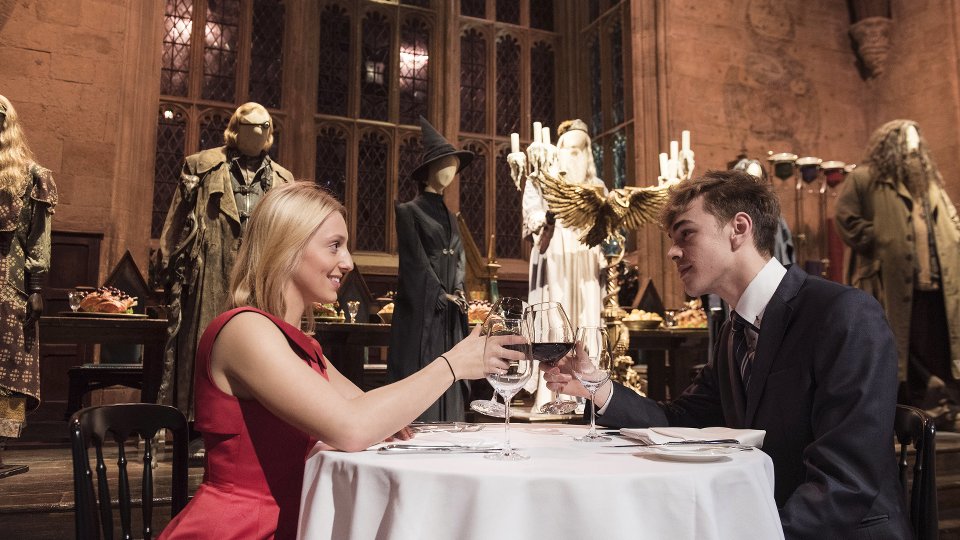 Have you ever fancied spending your Valentine’s weekend at Hogwarts?

Well now you can as Warner Bros. Studio Tour is inviting couples to enjoy a banquet at Harry Potter – The Studio Tour. On Saturday 13th and Sunday 14th February 2016, guests can enjoy Valentine’s dinner in the Great Hall at Hogwarts. They will be greeted on arrival with welcome drinks and canapés (including a special ‘Love Potion’ cocktail), before taking their seats at individual tables for two in the authentic Great Hall set.

The Great Hall has served as the location for many memorable moments from the film series, including the Yule Ball dance scenes from Harry Potter and the Goblet of Fire. The set is now dressed with two of the recognisable long tables as well as a selection of costumes and props used during production such as the House Point Counter and Dumbledore’s lectern.

Guests can enjoy a three-course dinner including a starter, main course and assiette of desserts to share and during the meal they will have a complimentary photo taken to commemorate the occasions. After dinner guests will be given exclusive after-hours access to the Studio tour.

Following the tour guests will enjoy a tankard of Butterbeer in the backlot café be able to wander up the wizarding shopping street of Diagon Alley before arriving at the breathtaking Hogwarts castle model. After-dinner tea, coffee and petit fours will be served in the shadow of the majestic model which is the jewel in the crown of the Art Department.

Couples will conclude their evening by returning to the Studio Tour’s lobby where they’ll be able to collect their chosen wand.

The event will run from 7pm until midnight and is open to over 18s only. Guests will be seated at individual tables of two and tickets are priced at £247.50pp (available to purchase in pairs from Wednesday 13th January at www.wbstudiotour.co.uk/valentines or by calling the attraction’s Visitor Services Team on 0845 084 0900).