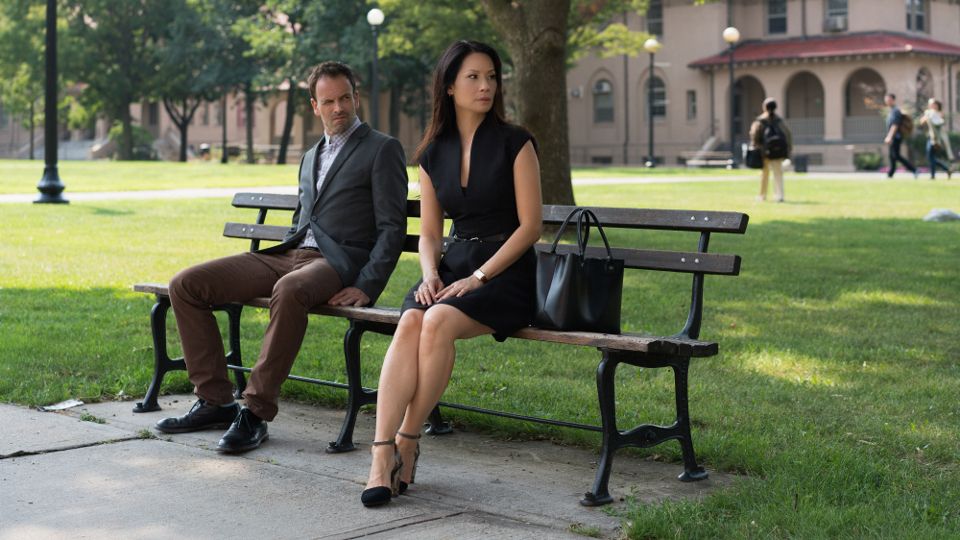 In the second episode of Elementary, Sherlock’s father (John Noble) offered to get Holmes (Jonny Lee Miller) and Watson (Lucy Liu) reinstated as consultants at the NYPD. After taking a case with the FBI the duo decided that they would indeed take him up on the offer. However they were both suspicious of his motives.

The third episode began with a man returning to an apartment unaware that he was being stalked. The balaclava donned stalker checked his phone to confirm his target the followed him into the apartment. After making the man get on his knees the stalker shot him dead.

Suddenly the door opened and a second man entered who looked identical to the man just killed. As he tried to flee he was shot in the back and also killed by the now confused stalker.

After the credits we joined Sherlock making a terrible mess in his kitchen. It turned out he was devising some homemade snacks for his tortoise Clyde. When Watson joined him to see what he was up to Sherlock left her to clean it up for him.

Now reinstated with the NYPD the pair joined Detective Bell to examine the murder scene of the two men. Sherlock’s keen senses allowed him to quickly piece together how they were killed. Bell had information on each of the men but was unsure which was which. However a quick inspection was all that Sherlock needed to put the names to each body.

Later Sherlock met again with his father Morland. Sherlock was annoyed that his father was still in New York. Morland explained that he was involved in a project their which actually was more of a puzzle. This got Sherlock’s interest and he announced he would help his father solve his puzzle if it meant he would be gone afterwards.

The investigation into the men uncovers that they had both been in touch with the same person. After tracking him down the man explained that he runs a website called Doppelhunt which allows people to find unrelated lookalikes. He tracks people down using a flaw in some facial recognition software and claimed the company behind the software were after him.

Back to helping his father, Sherlock dug out his tuxedo and attended a benefit gala. Sherlock was tasked with watching a particular woman and his observations led him to believe that she was trying to play his father.

Back on the case Sherlock and Watson spoke to a guy employed by the facial recognition company who had also signed up for Doppelhunt under a fake name. He explained that he did so to try and get access to the modified version of their software.

Back at the precinct a man turns up who also looks like the two murdered men. He explains that one of them wanted to give him $10,000 to take a DNA test with no questions asked but he refused. This led Sherlock to wonder if the man offering the money had something to hide, such as a murder.

More investigation uncovered an murder case from 11 years ago which led them to the brother of the murdered man who is a cop. He admitted to killing the two men but that he only planned to kill one to avenge his brother.

Eventually Sherlock pieced everything together and realised that the company employee that they spoke to was the man who committed the original murder.

Back to his father, Sherlock helped fix another problem. Morland then turned up at the Brownstone and told Sherlock that he was in New York to be close to his son and wanted the past behind them. Sherlock wasn’t happy but Morland also announced that he would be staying in New York indefinitely.

The fourth episode of the new season is All My Exes Live in Essex. When Holmes and Watson investigate the murder of a fertility lab technician, they discover the woman had a secret personal life that leads them to multiple suspects. Also, the tables are turned on Watson when she’s investigated by an NYPD detective.

Tune in to Sky Living HD at 9pm Thursdays to see the latest episode of Elementary. Preview episode 4 with our gallery below: