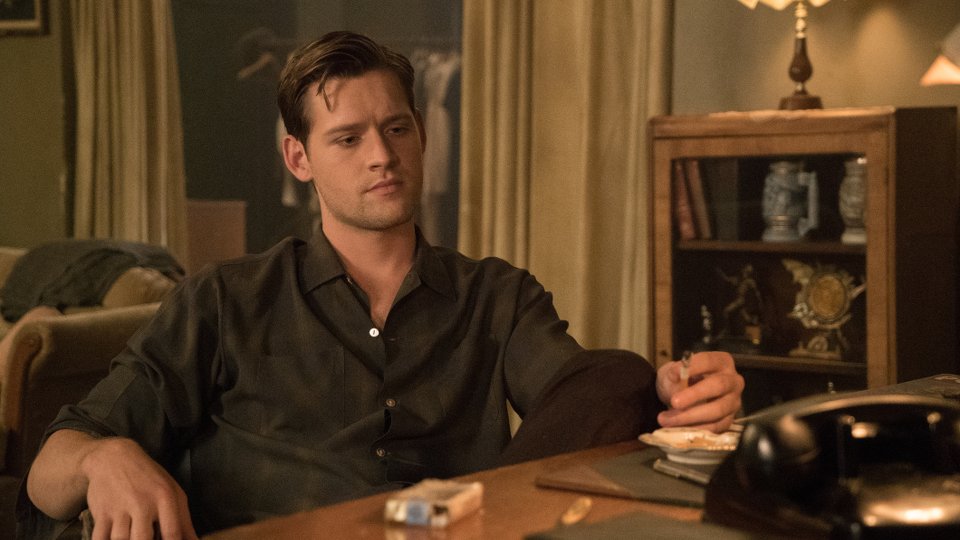 Amazon is establishing itself as a formidable platform for original content in the wake of the huge success of Transparent.

This Friday, another series will be making its debut following a strong response during the annual Amazon Pilot Season. The Man in the High Castle has received a lot of buzz since its first episode was released and recently Amazon made the second episode available ahead of the series’ full release.

We caught up with actor Luke Kleintank, who is one of the leading stars of the show, to find out more about what we can expect, talk about the epic scale of the show, and to discuss how he got involved with the show in the first place.

The Man in the High Castle is being released on Amazon Instant Video this week. What do we need to know about it?

The premise is based on the great novelist Philip K. Dick and what he wrote in his book is that the Axis won the war and not the Allies so America is no longer. It is now under the power of Nazi Germany and the Nazis are integrated with the Americans on the East Coast of what used to be the United States. Imperial Japan took Pearl Harbour so they took the West Coast of the United States. In between these two powers, in the Colorado and Rocky Mountains area, it’s considered what we call a neutral zone so it’s the buffer zone between these two powers.

Joe is a young individual who is under the occupation of the Nazis. He’s an American Nazi living in New York under occupied territory. You just go on a journey with him. He’s working for the resistance that is coming into play that is against this fascist lifestyle. You follow him on his journey to the neutral zone and discover who he is as a person; the people he meets and what he decides to do with his life. You see the world through the eyes of these characters, the decisions and the choices they make in an oppressed society.

What attracted you to be a part of the show?

The premise of it; the alternate history, that ‘what if’ mentality? I think we all pontificate on the premise of ‘what if?’ – what if you won the lottery or what if married the girl that you first dated? That’s what attracted me to it along with the people involved; Frank Spotnitz who did The X-Files, I’m a big fan of and Ridley Scott I’m a big fan of. It was kind of a no brainer for me.

In the first episode Joe and Juliana, the main female character, are kept quite separate for most of the time. How are their paths going to cross as the series progresses?

They meet at the end of the first episode in a diner in Cannon City, at Sunrise diner. Is it romantic? You could say there’s more of a curiosity between the two characters. Essentially they meet each other and you’re going to see them go on a journey together through the neutral zone and see how that relationship unfolds.

What are the differences between shooting a TV show for Amazon as opposed to traditional network TV?

The way I look at it, it’s kind of like a book. You can pick it up and read a chapter or four chapters or the whole book in a day. It’s at your control and I think it’s more engaging because you don’t have to wait. Each episode picks up where the last one left off so it’s essentially like one large movie.

What really struck us from the first episode is how epic the show is and how visually stunning it looks. What is like to be a part of a show that has such a grand scale?

It’s so exciting and intriguing! Every day I put on a new outfit and walk on to sets where the detail is down to the smallest thing. My work, I don’t have to do much, I feel like I’m stepping into a whole world that they’ve created. The crew is amazing and everyone is on their game and they’re really passionate about it. It’s pretty incredible.

When the show first debuted as part of the Amazon Pilot Series did you have any idea how great a reaction it was going to get?

I had no idea. Anything you do in this industry as an actor you just go and do it and you have the hope that it’s going to be good. I think the material spoke for itself when I first read it. I didn’t know the scope of it and I didn’t know how the fans were going to respond because this is a new medium. It is a platform where the audience decides whether or not a show goes. It was really nice to see the response and all the great feedback.

Is satisfying for you as an actor that you’re fans can binge-watch the whole show and not have to wait for it to play out week-by-week?

It’s the way I like to watch TV. I love to binge-watch myself and being a part of that is like a dream. Most actors love to do independent films and independent dramas because of the material and the way it’s produced. I think this is similar. It isn’t independent as far as money and scope, it’s a massive project, but it has the same type of feel. It’s gritty and it’s awesome!

The role of Joe is very different to your best-known roles in Bones and Pretty Little Liars. How does this role compare to those?

Time, quality, crews and just the platform of Amazon – it’s completely different. Pretty Little Liars and Bones take 6-7 days to film an episode. In our series it takes 10-11. It’s more like a film; we have more time collaborate, we have more time to think about the dialogue and sit with it. The big sets that they build and the world we’ve created is just completely different. It’s something I’ve never seen before and it’s something I’ve never done. The quality and the way it looked to me was just unbelievable as is the writing.

What else do you have coming up over the next few months?

I’m taking a break right now. We filmed for six months in Vancouver and now we’re doing the press tour so I’m kind of tied down to that. If a good little independent film comes along then I would love to do it. I’m actively seeking but nothing has caught my attention at the moment.

You’ll be able to have a break over Christmas then?

Yeah I’ll get a break over Christmas. I’m going to go visit family and just relax. It’s looking very positive for a season 2 from what I’ve been told, it’s about a 90% go, so I need to get ready for that and take a breather. The work that we’re doing is very intense and it is a lot. I think it’s good to relax then go back into it.

Why should people tune in to binge-watch The Man in the High Castle?

It’s an amazing show. It’s a piece of history that could have been. It’s intriguing and it’s going to make you think. It will make you question your own reality as an individual. I would hope that it would intrigue people to know their history. It’s a fun show and it’s a dark show. It’s a pretty incredible piece of work so it would be a shame not to see it.

All ten episodes of The Man in the High Castle are available for unlimited streaming on Amazon Prime on November 20th 2015. Watch the trailer for the series below:

Advertisement. Scroll to continue reading.
In this article:Amazon, Luke Kleintank, The Man in the High Castle