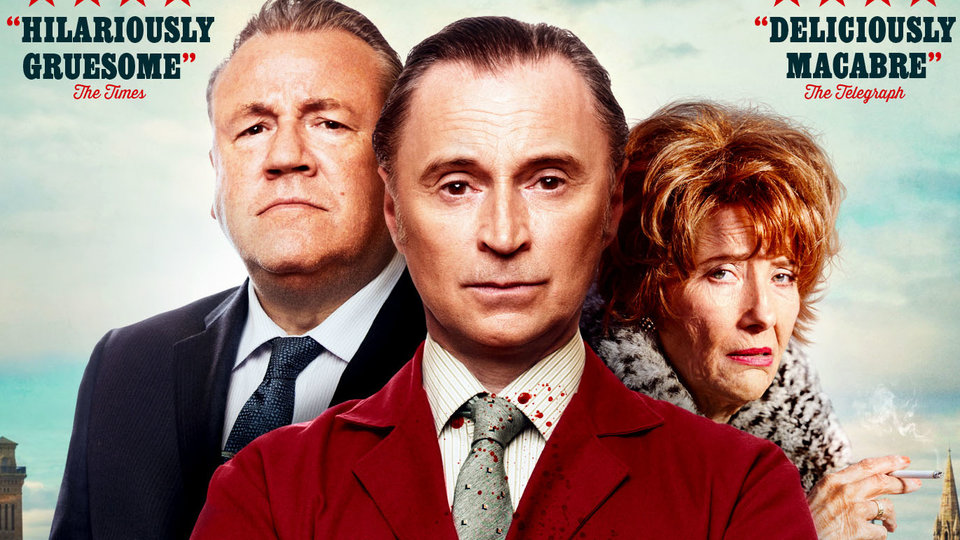 BAFTA winning actor Robert Carlyle (The Full Monty) is a tour de force both in the lead role of the ill-fated barber Barney and in directing his all-star cast including Emma Thompson, Ray Winstone, Ashley Jensen & Tom Courtenay.

The Legend of Barney Thomson tells the tale of Barney (Carlyle), a hapless barber devoid of charm and ‘patter’ as his fellow barbering brethren mockingly remind him.  Barney’s mediocre, mundane life of plotting for a way up is about to be transformed, following a typically incompetent fit of pique, when he inadvertently stumbles into serial murder, and with it headlong into the trail of a grotesque series of killings gripping Glasgow.  As he makes ham-fisted attempts to cover his tracks, he finds himself on the run from the bearish Detective Inspector Holdall (Winstone) and a testosterone-driven local Police task force at each other’s throats over the ongoing crimes.

With his sanity threatening to unravel, Barney fatefully turns to his domineering, emasculating mother, the formidable Glaswegian ‘good-time girl’, Cemolina (Thompson). There’s no turning back now and the path that lies ahead for Barney may yet be littered with more murderous consequences than he could have ever anticipated

Adapting his debut from the highly popular series of crime novels by Scottish author Douglas Lindsay, Carlyle has crafted a unique, timeless visual style for his story, filming at iconic locations in his beloved hometown of Glasgow. Equally deserving of iconic status is the character of Cemolina, spectacularly brought to life by Emma Thompson, dramatically aged into the role by Academy Award winning Make-up & Prosthetics Artist Mark Coulier (The Iron Lady, The Grand Budapest Hotel) to give a performance unlike anything she has done before.

Supporting both is Ray Winstone, bringing his unique brand of menace and humour to the role of Barney’s nemesis, the Detective Inspector on his trail, and veteran actor Tom Courtenay in a very special cameo. Fittingly for this very home-grown story, Carlyle has also drawn on a wealth of Scottish acting talent to fill his cast, including Ashley Jensen, Martin Compston, Kevin Guthrie, Stephen McCole and Samuel Robertson.

The Legend of Barney Thomson is a must-see treat for DVD fans with a wealth of specially prepared bonus material including a director’s commentary with Robert Carlyle and hilarious deleted scenes and blooper clips.

To be in with a chance of winning one of 3 copies of The Legend of Barney Thomson on DVD, just answer the question below.

Barney Thomson is released on DVD on 16 November

In this article:Competition, Emma Thompson, Robert Carlyle, The Legend of Barney Thomson