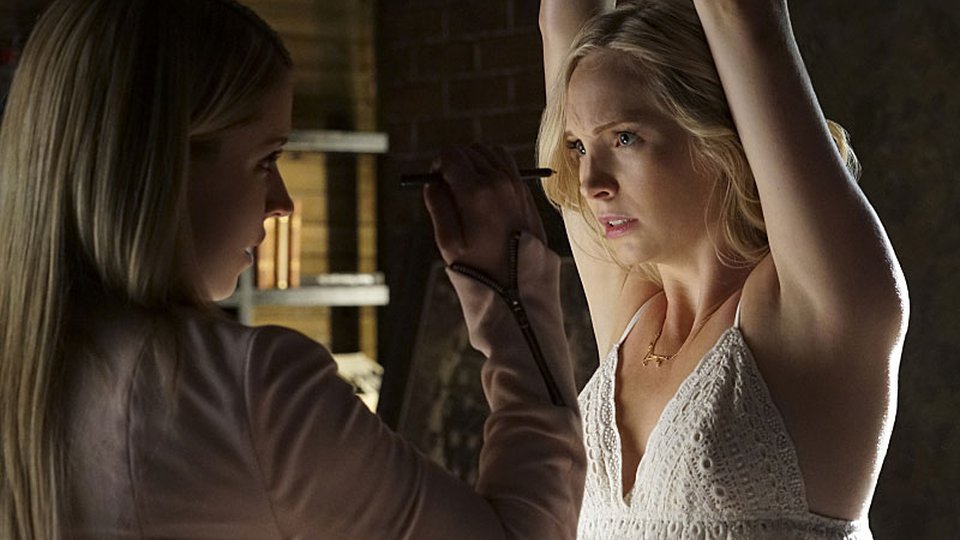 The Vampire Diaries returned to the UK last night as it kicked off its seventh season, which is its first without Elena (Nina Dobrev).

The first episode of the season teased three years into the future as Damon (Ian Somerhalder) and Stefan (Paul Wesley) were being hunted by someone. Who that someone is wasn’t revealed but suffice to say that it’ll fuel the mystery for much of the season we’re sure.

In the present day Caroline (Candice King) was keeping diaries so Elena knew what had been going on whilst she was under Kai’s (Chris Wood) curse. She teamed up with Matt (Zach Roerig) to blow up the house where Lily’s (Annie Wersching) heretics were living to try and put an end to them. While the bomb was successful, the heretics managed to get out alive and Caroline was tricked by Enzo (Michael Malarkey) who drugged and kidnapped her for Lily.

Elsewhere in the episode Damon and Bonnie (Kat Graham) killed on of Lily’ heretics and Alaric (Matt Davis) secretly explored ways of bringing Jo (Jodi Lyn O’Keefe) back to life.

The next episode of the season is Never Let Me Go. Damon makes an impulsive decision that could undermine a deal between Lily and Stefan, while Caroline uncovers a stunning secret.