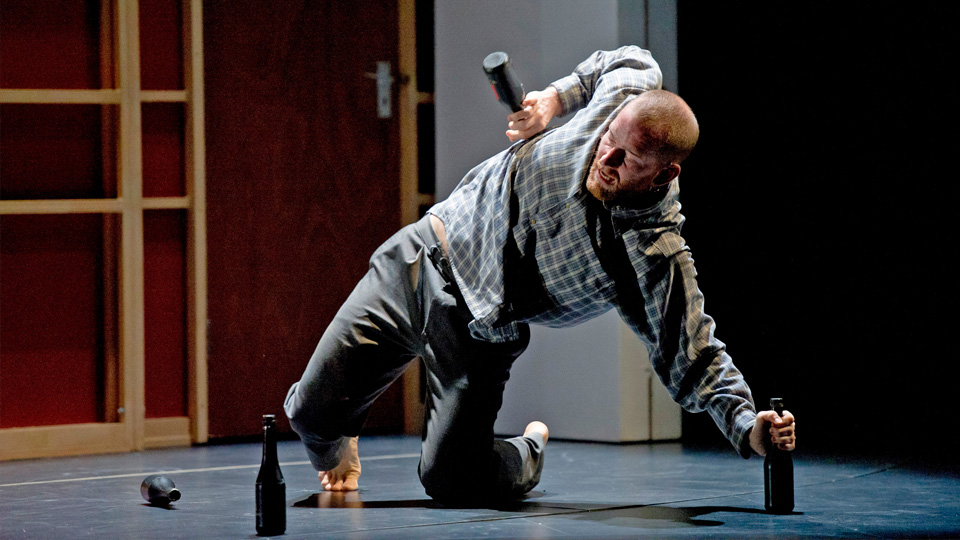 DV8 Physical Theatre present John at West Yorkshire Playhouse as it enjoys the second leg of a national tour. Co-produced by the National Theatre, the performance is conceived and directed by Lloyd Newson, based on the first person testimony of a man who has lived a varied and troubled life. After several failed relationships, the birth of a son, imprisonment and drug abuse, John explores his sexuality and finally comes to terms with what he wants in life. It is a brave and brutal journey explored through movement and dialogue.

From the outset John is an unforgiving and unrepentant piece of documentary theatre. The play opens with a montage of ruthless recollections of violence and torment, staged on a revolving set which evolves and transforms with each turn. Performers weave amongst its undulating passages and chambers like the shapes within a kaleidoscope; there are flashes of nudity, screams, tears and arguments as John wades through his complex life. It is an exceptionally well directed opener to a play, densely written and visually detailed. Theatre such as this brims with blink-and-you’ll-miss-it moments.

John explores the boundaries between dance and drama and blurs them together in a seamless medium. The dance constantly evokes desire and struggle; it is at once seductive and emotive whilst highly playful and light of touch. A purposefully stiff courtroom scene is superbly marked out with hard lines and shifting movements from the cast, mocking the movements of chess pieces in a game of formal argument which subverts its subject with a cheeky pleasure. It’s a hilarious moment and typifies how this production translates complex feelings into playful dance.

Nudity is a potent and daring element of the show, documenting John’s experiences in the gay sauna subculture. It is something of a shocking and insightful revelation into the lives of men who frequent a secret world solely set up to engage in promiscuous sex. Seemingly happily-married straight men hook up with unknowns, a man who is HIV Positive thoughtlessly engages in unprotected sex and John searches for souls seeking companionship. The scenes are directed with a documentary realism which is honest, uncensored yet never gratuitous.

A standout feature of John is its remarkable production design by Anna Fleischle. Aside from the hugely complex set which is constantly revolving and travelling from memory to memory, there are additional wonders of stagecraft. A collection of coat hangers establishes a room full of previous girlfriends, each which are dressed with an appropriately charismatic gown. The addition of a tiny hanger which John dresses in a babygrow is a touch of genius and brings the character’s narration to life in an abstract and vivid style. A simply lit ball of smoke also evokes one of the most simple and impressive realisations of fire to be witnessed on stage, further enlivened by performance and movement which provides added intensity.

John is a heartfelt expression of a colourful testimony expressed through shape, form and movement. Whilst sad and unresolved, it is never nostalgic nor twee and maintains the amiable feel of its narrative voice. Honestly self-critical, confused, yet affable and always searching, John is a fascinating character presented in a world which is equally remarkable. The production is an evocation of an unique life which is far from complete; peerless, fearless and constantly turning a new corner, John is a steamy story of light and dark with a unique staging which is literally a sexual revolution.