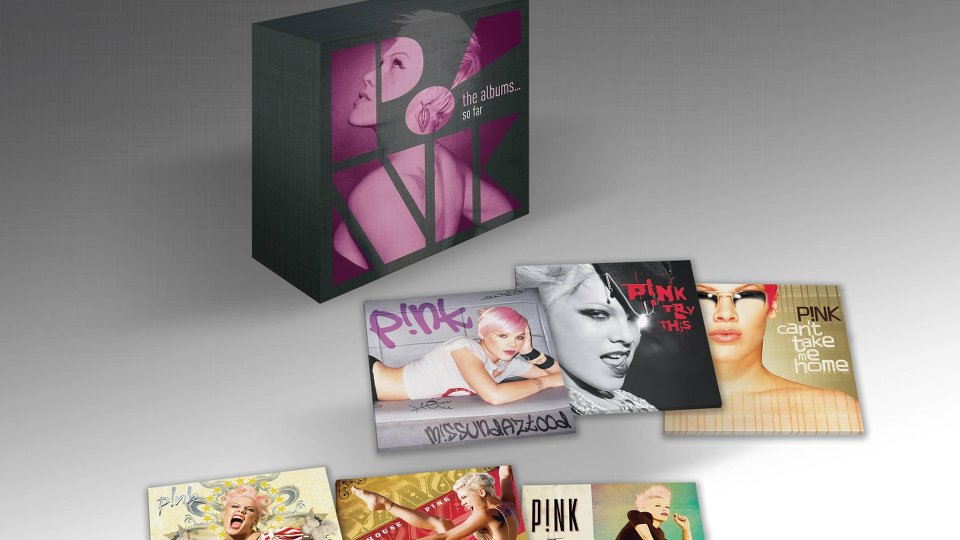 Pink has been dominating the charts for 15 years and in that time she’s released an incredible 34 singles and 6 studio albums. Every single one of her albums has sold millions of copies across the world and she’s firmly established as one of the most successful female artists in the industry. Over the years she’s wowed audiences with her spectacular live shows that combine her athleticism with stellar live vocals and jaw-dropping choreography. In time for the festive season Pink is releasing all of her studio albums in a new boxset for the first time.

The Albums…So Far!!! is a timely reminder of just how far Pink has come since she broke through with her debut album Can’t Take Me Home in 2000. Her debut single There You Go positioned her as a tough R&B newcomer and from that point on Pink began building on her success. In 2001 Pink threw fans a curveball when she changed direction and ditched the R&B sound for a more pop/rock feel with Missundaztood. That proved to be a sound decision as that album became her biggest-selling to date with over 13 million copies sold around the world. It was Missundazstood that launched signature hit Get The Party Started and scored her a number 1 single here in the UK with Just Like a Pill (she previously hit number 1 with Lady Marmalade alongside Christina Aguilera, Lil’ Kim and Mya).

From that point on Pink carved out her own niche in the industry combining witty lyrics with a variety of musical styles and sounds. 2003 album Try This, her least successful album to date selling 2.7 million copies worldwide, remains her most underrated. For that record Pink delved deeper into her rock influences with lead single Trouble and the expletive-laden Last to Know. Despite that blip (which to be honest wasn’t that much of a blip was it?) Pink returned stronger than ever with I’m Not Dead and her tongue-in-cheek single Stupid Girls, which poked fun at the crop of airhead ‘celebrities’ that were polluting the media at the time.

In 2008 Pink followed up the success of I’m Not Dead with the hugely successful Funhouse, which spawned the huge global smash So What. Amazingly that track marked the first time Pink had achieved a solo number one in the US and here in the UK it became her second solo number one single. Whereas most artists find their careers dipping by this time, Pink enjoyed renewed success with Funhouse out-selling I’m Not Dead and 2012 album The Truth About Love out-selling both of them! The Truth About Love was responsible for another number 1 US single in the shape of Just Give Me a Reason featuring Nate Ruess, and the song has gone on to be the audition song of choice for many an X Factor and reality TV singing show contestant.

There’s no denying that Pink has always been a consistent singles artist but what The Albums…So Far!!! reminds you is that she’s always been a very consistent album artist too. It’s rare for a popstar to deliver more killer than filler but Pink has always done that. She’s not had a bad album yet and whilst there may be a handful of songs we’d choose to skip, those are few and far between over her six album releases.

Digging into the albums there are plenty of highlights – the punchy Hell Wit Ya on Can’t Take Me Home, the funky in your face Respect from Missundaztood, the sexual Oh My God with Peaches on Try This, the politically-charged Dear Mr. President on I’m Not Dead, the storming It’s All Your Fault on Funhouse, and the raucous hip-hop vibe of Here Comes the Weekend featuring Eminem on The Truth About Love.

It’s very rare for Pink to make a mis-step and the only issue we have with this boxset release is that it misses out two of her best hits – Raise Your Glass and Fuckin’ Perfect – both of which appeared on her greatest hits release Greatest Hits…So Far!!! It’s a shame that album wasn’t included here as it would really give fans the complete collection.

The Albums…So Far!!! is a timely reminder that Pink is one of the best popstars in the world. She’s had a steady output over her 15 years in the industry and she’s delivered more hits than most artists manage in a lifetime. She’s never lost her personality and you always know that it’s Pink you’re listening to whenever one of her songs comes on the radio. We can’t think of many better ways to spend the winter months than revisiting all of Pink’s amazing albums.

Advertisement. Scroll to continue reading.
In this article:Pink