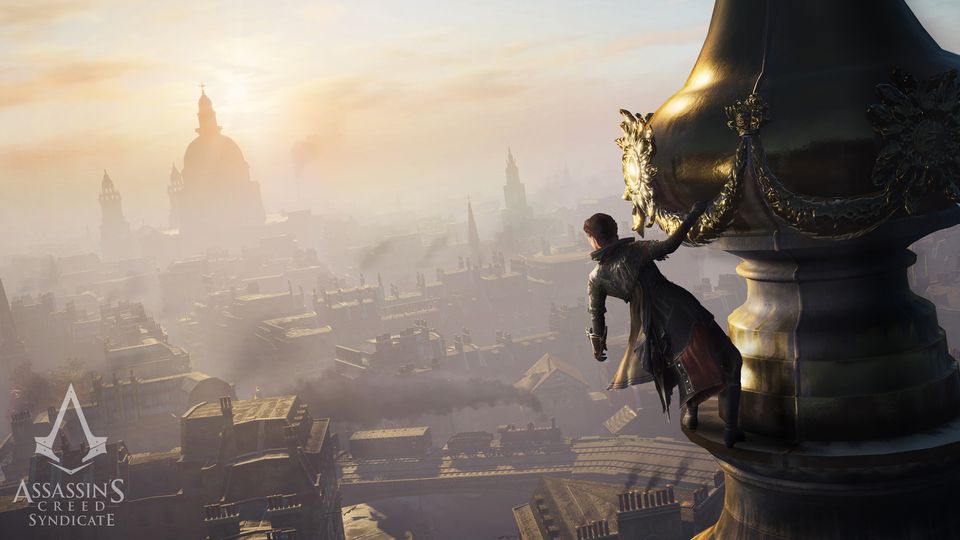 Last year Ubisoft tried to satisfy everyone and ended up stretching themselves a little too far. They released Assassin’s Creed Unity, the first title in the series designed for Xbox One and PS4, alongside Assassin’s Creed Rogue for Xbox 360 and PS3.

Creating just one Assassin’s Creed game is a massive undertaking. While Rogue was more of the same kind of game as Black Flag, Unity wanted to be way more ambitious. Unity featured the most detailed environments yet seen in the series and also attempted to squeeze in online co-op and a competitive multiplayer mode.

Unity was a broken mess at launch which really upset fans. Thankfully Ubisoft worked tirelessly on patching the game and after a couple of weeks of frustration things settled down. This year they are back with Assassin’s Creed Syndicate, a single release for current gen consoles and PC. Have Ubisoft learnt from the mistakes of Unity?

Syndicate takes the series to the Victorian era for the first time and is set in London in the year 1868 during the Industrial Revolution. This was a time controlled by a rich few with the lower classes working hard, living poor and dying young. The city attracted people from all over looking to take advantage of the newest technologies to improve their lives.

Another first for Syndicate is that you play as two protagonists – Jacob Frye and his twin sister Evie. During the story missions you’ll spend more time as Jacob but between these missions you can switch characters in the main menu with a click of the right thumbstick.

Rather than just including both genders for the sake of it they are quite different and each have their own motivations. Jacob wants to rid the city of Templar corruption by recruiting people to fight with his gang of Rooks. Evie has other ambitions and has her sights set on finding a new piece of Eden. Evie seems to know what she wants while Jacob is arrogant and sarcastic which leads to some great banter between the two.

If you’ve played other games in the series you’ll find that things feel instantly familiar. The way your characters control and move about the environments are largely the same. The biggest addition is the Rope Launcher which you get access to a few hours in during a mission to help Alexander Graham Bell.

The Rope Launcher makes getting around the city a breeze by allowing you to shoot a rope from your wrist and quickly scale buildings (think Batman’s grapple). It also allows you to create a rope between two buildings to cross a gap or act as a zip-line. It’s possible to move up or down on a zip-line and they are perfect for setting up aerial assassinations.

The other great way to get around London is by horse and carriage. These can be hijacked GTA style and are great for getting away from a gang of Blighters. The can also be used to hide and kidnap people. If you find yourself pursued by another carriage you can ram into it or even jump on top for a fist-fight.

As Jacob and Evie earn experience they unlock skill points. They each have their own skill trees allowing you to spend these points to customise each as you wish. The bulk of their skill trees are similar but they also have unique features. Jacob favours force while Evie goes for stealth.

The city of London is massive, around 30% larger than Unity, and it looks stunning. The developers have learnt from the mistakes with Unity and focused on making detailed interiors for important buildings only. The streets of London are far less crowded than those of the French Revolution and this helps keep the framerate smooth.

London is split up into different boroughs that you can conquer by completing a variety of activities which include Bounty Hunt, Child Liberation, Gang Stronghold and Templar Hunt. This involve tracking down people of interest, freeing child slaves, murdering gang members and killing their leaders. Once a borough has been liberated it unlocks a Gang War.

Syndicate isn’t just limited to these activities and has plenty of variety to keep you entertained. Other things to do include Fight Clubs, Cargo Hijacks, Train Robberies, Boat Raids, Smuggler’s Boats, Cart Escort and the excellent PS4-exclusive murder investigations Dreadful Crimes.

The story in Syndicate is stronger than Unity as you work towards taking down Templar Crawford Starrick. The writing is good and it keeps your interest. You also come across a variety of fantastic historical characters which include Charles Dickens, Charles Darwin, Florence Nightingale, Karl Marx and even Queen Victoria. Many of the interactions with these characters are highlights of the game.

Eventually you gain access to your Hideout which happens to be a train. The different carriages house the various options available to you and it’s great to be able to move around. You can fast-travel to your Hideout whenever you like and it constantly moves around the city too. This brings some neat features such as being able to climb up on the roof to see the sights or just hop off when you like.

Your Hideout contains a safe where you can come to collect a passive income from your activities and investments. You can also view your souvenirs, check out your assassination wall, change outfits, access the Black Market, upgrade your gang and change your gear and weapons.

The gang upgrades have three trees – Ringleader, Insider and Swindler. Upgrades require cash and resources. Examples of upgrades are buying carriages for your Rooks, different Rook archetypes, boosting your passive income and bribing the police to ignore certain illegal activities.

In addition to the massive amount of things to do are a brilliant variety of collectibles to discover. These include chests, locked chests, pressed flowers, Helix glitches, Royal correspondence, vintage beer bottles, illustrations and secrets of London.

In-game currency is British Pounds (£) which are obtained via mission rewards, chests and looting enemies. If you wish you can also purchase more currency via optional microtransactions at the E-Store. You can spend you real hard-earned cash on Helix Credits. The actual prices weren’t available before launch but buying 250 Helix credits translates to £10,000 in-game currency and 2,500 Helix credits gives £100,000. The E-Store also lets you spend Helix credits on crafting resources, XP boosts, crafting plans and maps.

During the 40 or so hours I’ve put into Syndicate so far I’ve encountered very minor issues. Most of these are just little frustrations with the controls when you accidentally end up climbing something instead of jumping off it. The combat still feels like it could do with a little extra polish as it’s easy to be overwhelmed by multiple enemies. I also would have liked to see a bit more reaction from normal citizens who seemingly ignore you as you creep about murdering folk. These are all fairly minor complaints when compared to Unity’s launch.

There’s no co-op or multiplayer modes this year and Syndicate feels more focused as a result. While Ubisoft haven’t fixed everything they certainly seem to have learnt a lot since Unity. The game will last you a really long time and the planned DLC is only going to add to the variety and game length. For me Assassin’s Creed Syndicate is easily the strongest entry in the series since Brotherhood and a very welcome return to form.