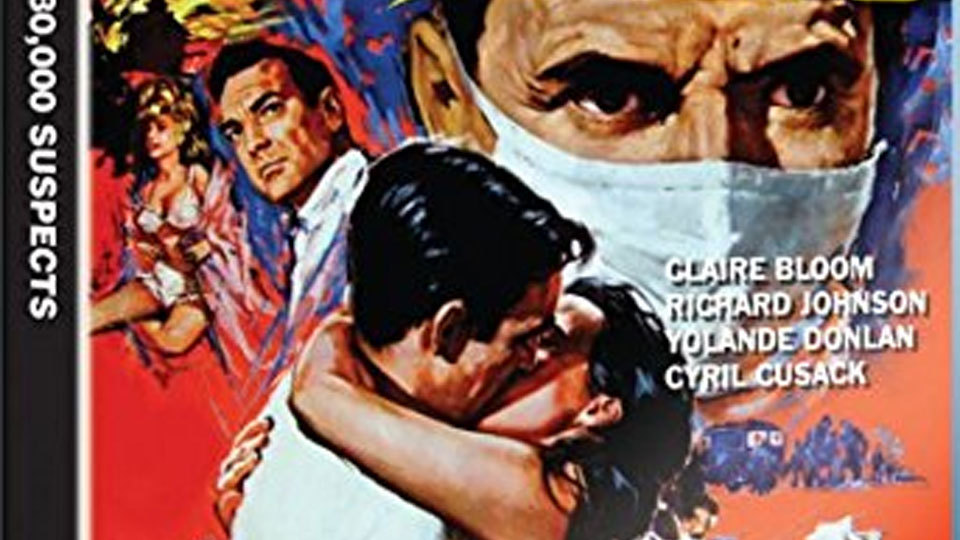 80,000 Suspects is a title from the Rank Organisation that was filmed in Bath during the freezing cold British winter of 1963. It teams up Claire Bloom, often seen opposite Richard Burton, with the late Richard Johnson, with whom she would also collaborate on screen again.

Johnson and Bloom play married couple Steven and Julie Monks who are also doctor and nurse (and as it’s 1963, gender norms are conformed to: he’s the doctor). Their marriage is disintegrating, and Steven is hiding an affair some time in the past with a colleague’s wife, and they decide a holiday may help them to work out their differences. However, on the eve of their departure there’s a case of smallpox at the hospital, and when it escalates into an epidemic, Steven decides to stay and fight the disease, hoping the crisis will strengthen his bond with Julie.

80,000 Suspects never quite makes up its mind what sort of movie it wants to be. Director Val Guest (who also wrote the script – more on that shortly) was behind the camera for the apocalyptic extravaganza The Day The Earth Caught Fire two years earlier, and he brings a gloomy, dystopian threat to this production too. However, the focus on the main characters’ infidelities and the minutiae of their relationships detracts from the more interesting medical emergency story and lends the movie more of a feel of an instalment of a hospital soap opera.

The performances are fine, without ever bursting out into anything truly attention-grabbing. Richard Johnson was excellent at embodying the everyman, and his character of Steven Monks plays to his strength, yet he never quite stretches his acting muscles as fully as he might. Bloom similarly plays it safe. Her broad emotions ring true, but there’s a lot of territory left untrodden.

Part of the problem is a muddled script that suffers from turgid dialogue and uneven focus. It’s not quite clear even ten minutes into the film where it’s heading, and it remains oddly uninvolving through to the resolution. The brief flashes of semi-nudity, daring for a British film in the early 1960s, are tame now, yet still feel like a gratuitous attempt to grab the audience’s attention where other means have proven less successful.

It’s supporting actor Cyril Cusack who steals the show as Father Maguire, the benevolent Catholic priest looking for souls to save. You can almost smell the tobacco and scotch through the television screen. Cusack’s impish warmth isn’t lacking in the part.

80,000 Suspects is a competent film with enjoyable aspects to it, especially the location filming in and around Bath. Yet it never quite takes off in the way that it should, and overall its leadenness is probably what has led to it sinking into relative obscurity. Aficionados of the Rank Organisation’s output, and of the two leading actors will comprise the natural audience for this release. It looks crisp and clean in high definition, with immaculately-restored black and white film stock.

80,000 Suspects is released as part of Network’s The British Film collection.