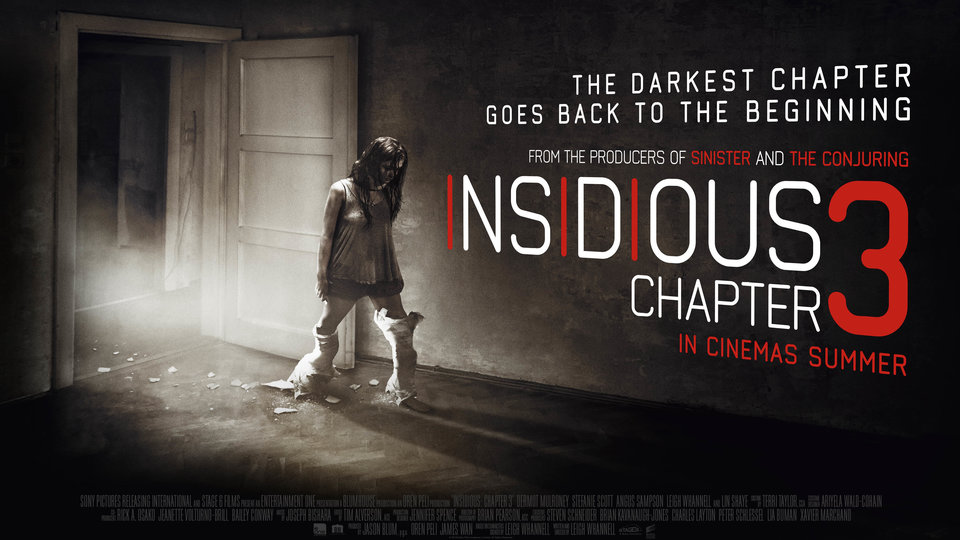 Elise Rainier (Lin Shaye) lives the life of a recluse after her encounters with the spirit-world. She is visited by teenager Quinn Brenner (Stefanie Scott), a girl who has tried to reach out and contact her deceased mother. Quinn has inadvertently summoned something terrible which has attached itself to her, leaving Elise no choice but to challenge her demons and re-engage with the dead once again.

Writer/Director Leigh Whannell returns to one of his most memorable franchises to deliver a competently-made horror that has an abundance of creepiness and fright. Timeline-wise, Insidious: Chapter 3 is a prequel of sorts, taking place just before medium Elise Rainier helps out the older Josh Lambert (Patrick Wilson) and his family. This gives the film some nice context whilst delving into the fascinating world of Elise’s character.

Insidious: Chapter 3’s biggest success is undoubtedly Lin Shaye, who hands in a brilliant and engaging lead performance. It’s great to see the actress take centre-stage for once after being the best cameo-queen the horror genre has seen in years. Shaye brings likeability and empathy to her role and is a joy to watch.

Leigh Whannell reunites with Angus Sampson as we witness the genesis of their characters work alongside Elise. Both provide some decent comic relief as hapless ghost-hunters Specs and Tucker and share a great dynamic. Stefanie Scott does well as Quinn, especially in a terrifying scene when she is thrown to the floor and can’t move… she can see that something is in the room with her.

There are a couple of downsides. The usually reliable Dermot Mulroney doesn’t fit well here and his performance feels heavy and lumbering. There are some brilliantly orchestrated fright sequences in the film but not nearly enough. Once the big evil is revealed, it lessens the impact considerably. This is a common flaw in many horrors but the first two Insidious movies got the balance just right.

An enjoyable mass-market horror is hard to find these days but Insidious: Chapter 3 mostly fits the bill. It won’t leave a lasting impression like Paranormal Activity, Saw or indeed the first Insidious did, but it does most of the basics very well. And the final sting is a frightfully good ending that will give fans of this series something to scream about.