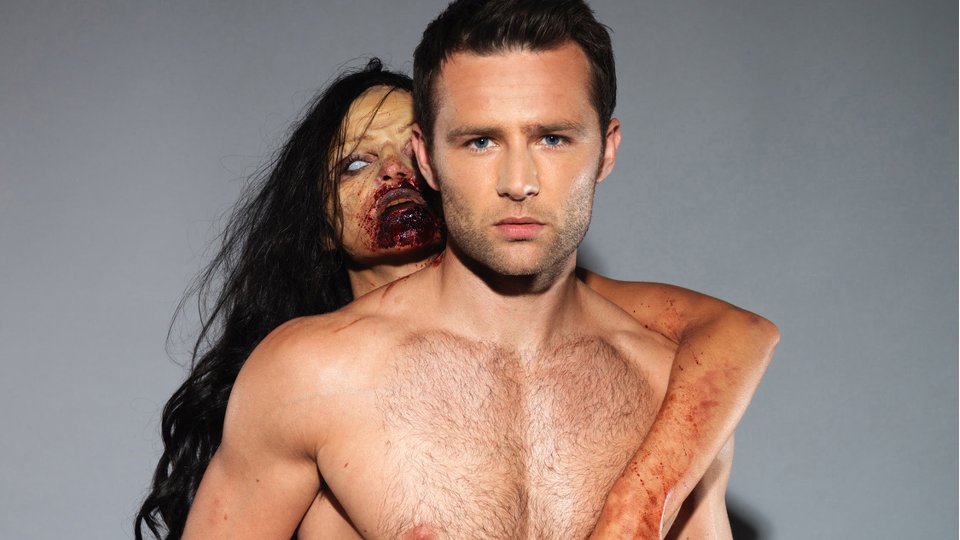 McBusted star Harry Judd has lost his shirt as he teams up with NOW TV to promote the new series of The Walking Dead.

Season 6 of the hit show is set to return to screens on 12th October on FOX and Harry has been unveiled as the face of NOW TV’s Obfleshion fragrance – a putrid unisex scent that mimics the smell of decaying flesh to repel unwanted zombie attention.

Labelled the ‘ultimate survival tool’ the fragrance sees Harry in a tongue-in-cheek adverts as well as showing off his pecs in a sexy photoshoot. The fragrance was inspired by The Walking Dead’s season 5 premiere where Carol Peletier (Melissa McBride) heroically saved Rick Grimes (Andrew Lincoln) and his gang by covering herself in the blood of a flesh eating ‘Walker’ to mask their human scent.

Harry said: “I’m a huge fan of the show and am dead excited to see what happens in the new Season when it launches on NOW TV and FOX next week. It was great to sink my teeth into filming the video and I’m pretty confident I could give Rick Grimes a run for his money in a zombie apocalypse – especially now I have the Obfleshion fragrance as a secret weapon against the Walkers!”

The fragrance was created in partnership with The Perfume Mistress, Tanya Moulding, and uses a mixture of odious ingredients to evoke the rotting stench of Walker flesh. Tanya comments: “In order to create the ‘Obfleshion’ scent I had to blend key components that would best replicate the pungent base notes that are reminiscent of putrefying flesh. The heart note sets the core character of the fragrance and for that I used Clary Sage and tuberose absolute to a heavier, sweet and fleshy note of rot and decay. I then combined ingredients such as Mushroom absolute, Ruby Gromwell and Geosmin to create a cadaverous, musty base note of rotting corpse and damp vegetation”.

Jo Fox, from NOW TV said: “We don’t want blood-stained, gurgling Zombies standing in the way of fans tuning into Season 6 of The Walking Dead arriving on NOW TV and FOX next week and with Halloween just around the corner, it was a no brainer for us to launch ‘Obfleshion’ to help fans ward off unwanted Walker attention as they gorge on the new series.”

The Walking Dead season 6 will be available contract free with the NOW TV Entertainment Month Pass. It premieres on 12th October at 9pm on FOX. See some photos from the shoot below along with the advert:

In this article:Harry Judd, Now TV, The Walking Dead