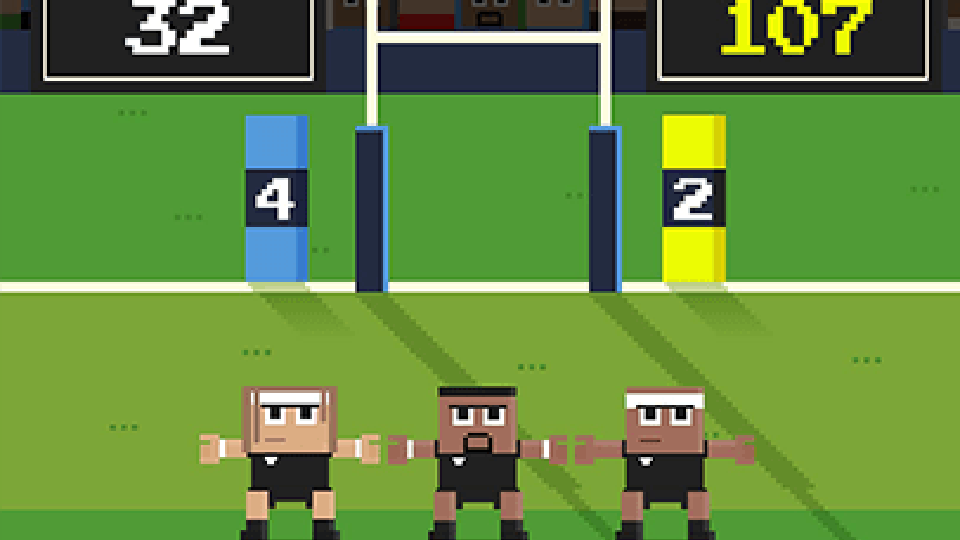 With the Rugby World Cup 2015 currently underway there are plenty of rugby apps and games hitting your favourite mobile devices. The one that caught our attention and has been taking up the most of our time is a little game called Retro Rugby.

As you may have guessed from the title Retro Rugby doesn’t attempt to be a full realistic simulation of the sport. Instead it takes inspiration from both Rugby Union and Rugby League and aims to provide a simple, fun experience.

The game uses an 8-bit aesthetic which fits the game perfectly and looks great on mobile devices. It reminds of the games of old where graphics weren’t all that important and instead tries to hook you with it’s gameplay.

The aim of the Retro Rugby is to score as many tries as you can. Your player starts at the bottom of the screen and the goal line is at the top. In your way are members of the opposing team.

Your aim is to swipe a safe path from your player to the goal line. There’s a countdown timer with just a few seconds running as you play. If your player hits an opposing player or the goal posts then you must try again. If the timer runs out then it’s game over.

If you are successful in scoring a try then you gain a point and move onto the next level where the timer resets. Initially levels feature stationary players but as you progress you also come up against players who move back and forth across the screen making your job more difficult.

Also to distract you are beacons that appear along the goal line. These feature bonus points if you are able to score on them. Often they can be positioned in harder to reach areas which means an unsuccesful try can lead to game over.

There’s not a lot else to Retro Rugby. You can change the colours of your players kit and share your scores up to Twitter and Facebook. The game remembers your highest score and some play stats but doesn’t provide online leaderboards or a way to compete with friends.

Retro Rugby is an addictive little title that will appeal most to rugby fans. It’s a great way to waste a few minutes and is one of those games that will keep you coming back to try and beat your highscore. Refreshingly there are also no in-app purchases after your hard-earned cash.

Retro Rugby is available now for free on iOS via the App Store and Android via Google Play. For more information check out the official Retro Rugby website.