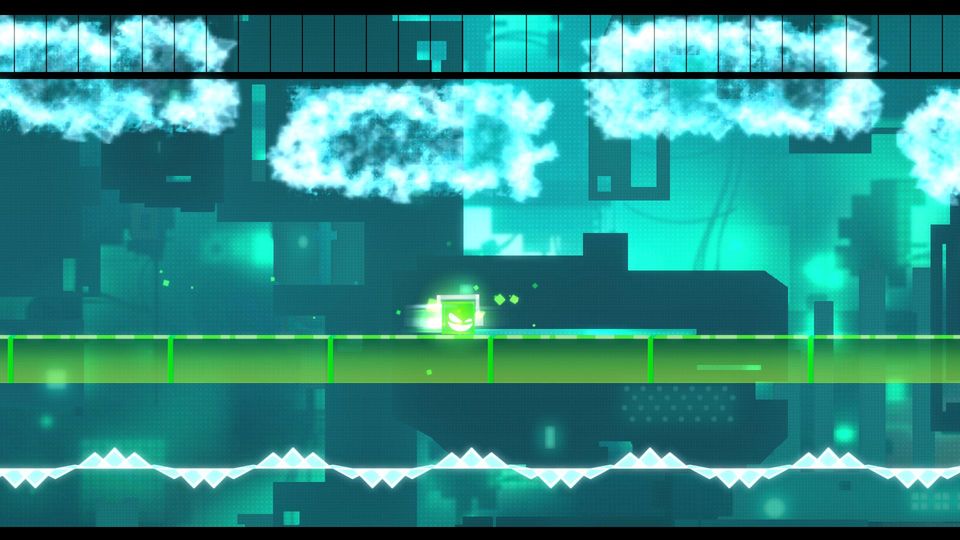 Inside My Radio is described as a rhythm-driven platformer adventure. It takes the well known platforming genre and combines it elements of music games to create a rather unique experience.

You play as a guy called Taek who is summoned inside a dying boom box. Once inside he takes the form of a green LED and is tasked with bringing electro, dub and disco music back to life to ultimately save the boom box. It’s a rather silly story but it serves its purpose.

At first glance Inside My Radio looks a bit like Mike Bithell’s Thomas Was Alone. However once you start playing it quickly becomes clear that this is a very different game indeed.

Moving Taek around is simple enough but he can only perform his other actions in time to the beat of the music. So for example he can jump, stomp and dash but only if you hit the button for each in time to the music.

Doing this takes some getting used to and can result in some frustrating button mashing. Pressing a button at the wrong time results in nothing happening. So if you were planning on dashing out the way of a hazard or jumping over something dangerous you need to time your actions well.

If you struggle with picking the beats out the game is prepared to help. A tap of the right shoulder button brings up a kind of metronome aid that makes it easy to see and hear the beat. Failure is made easier by the inclusion of unlimited lives and frequent checkpointing.

Throughout your adventure you get to meet a couple of other characters who you also get to play. They help tell the story of what is happening and also come with some unique gameplay mechanics to keep things interesting.

The main story mode is quite short and most players will get through it in around 3 hours. There are just a few points where the difficulty spikes a bit too harshly. Fortunately most of these are still quite manageable. It’s only right near the end of the game where things become a bit too frustrating thanks to a long and difficult boss battle.

Once you’re done with the story mode there are a handful of Time Attack levels to beat. These give you limited time to speedrun through some of the levels from the main story. There are extra seconds to collect on the way as well as penalties taken off for wrong moves.

Beating the Time Attack levels requires good knowledge of the game mechanics. They also demand that you make few mistakes in order to not sacrifice your precious seconds.

Graphically the game looks lovely and the levels are all unique. The level design is really creative and the variety of mechanics prevents things from getting stale.

Inside My Radio is fun while it lasts and on the whole it succeeds at trying something new. Sadly once you’ve completed the main story you’re unlikely to come back often unless you’re really keen on beating the Time Attack levels.

Inside My Radio is available now via the Xbox One Store at a cost of £11.99.

In this article:Iceberg Interactive, Inside My Radio