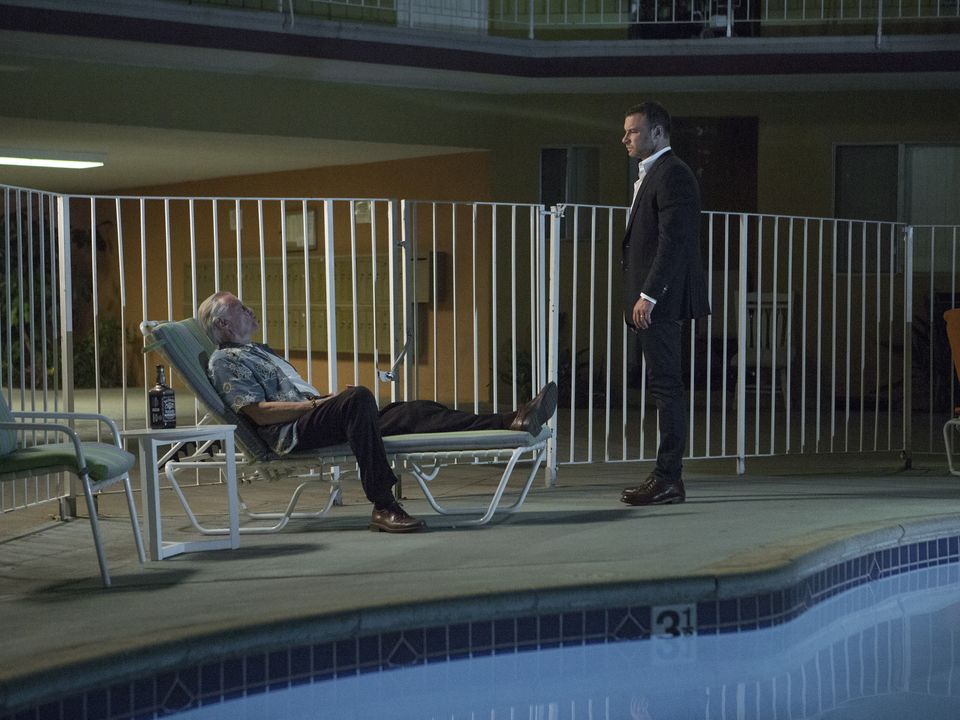 The focus for episode 10 was Ray’s (Liev Shreiber) father Mickey (Jon Voight). Having finally realised that his money making schemes had landed him in serious trouble he begged Ray to help him but Ray refused. Mickey’s only option was to meet with Detective Muncie (Michael Hyatt) ahead of her planned sting operation against the Minassians.

It seems Ray had a change of heart and decided to try and help Mickey. He appealed to a famous Armenian pop star called Hasmig who he had helped in the past. She refused to help though because she wasn’t happy of the way the US ignores Armenian Genocide.

Ray never gives up easily so went out of his way to change her mind. He blackmailed TV Chatshow host Flip Brightman to give her a spot on his new show to sing one of her Armenian songs about the genocide. Initially he refused until Ray promised to leak photos of Flip caught with his pants down using a glory hole.

Ray also shutdown Mickey’s business and sought out the help of Leo. He was able to pull some strings and have Mickey declared senile. This prevented the cops from using him in the sting operation. It also meant that Ray is now Mickey’s legal guardian.

Ray and Mickey then went to see Mrs. Minassians to plead for Mickey’s life but she was angered and refused. Ray was held at gunpoint while her henchman began to beat Mickey to death. Ray managed to disarm the man with a gun to his head but before he got a shot off the doors to the room burst open. Ray’s plan worked as it was Hasmig and she announced that Ray is her friend.

They let Mickey go and Ray took him home. On the way out one of the Minassian henchmen spotted the cop that has been tailing Mickey. He spotted him again later after the police sting which could mean that Mickey isn’t off the hook with the Minassians just yet. Ray told his father to leave and after an initial refusal he reluctantly agrees.

Bridget (Kerris Dorsey) got into a fight at school due to her relationship with Mr. Donellen (Aaron Staton). Abby (Paula Malcomson) had to go and see the headmistress who was threatening to expel Bridget. Fortunately Mr. Donellen stuck up for her and she got away with just a week suspension.

However Abby caught Mr. Donellen and Bridget exchanging looks and became suspicious. Back at home she searched Bridget’s room with the help of Terry (Eddie Marsan). They eventually found pills belonging to Mr. Donellen.

Bridget came home and apologised for her violence at school. Abby confronted her about the pills and her relationship to Mr. Donellen. Initally she denied it and tried to say she had stolen the pills. However she eventually cracked and confessed her love for Mr. Donellen.

Abby wanted to call the school or the cops but Bridget begged her not too. She also requested that Ray not be told because she knew he’d probably kill Mr. Donellen.

Instead Abby pays him a visit and threatens him to quit his job and leave town. He manages to convince her that nothing has happened and that it’s just Bridget who has a crush. Abby lets it go for now but says if she finds out anything different she’ll come back and kill him herself.

Cochran (Hank Azaria) continued his investigation into Varick but was focusing on Ray to the annoyance of his boss. Looking into Varick more he discovered that Avi (Steven Bauer) had travelled to Mexico in his place using a fake passport.

Cochran and his boss visited the home of Mr. Finney (Ian McShane) to interview him over the disappearance of Varick. He refused to talk to them and Ray was surprised to see Cochran.

Cochran was obviously loving his new shot at getting back at Ray. Ray tried to find out what he was up to and what he wanted but he wouldn’t say.

To try and find out Ray had Avi go to Cochran’s office to gain access to his computer. Before leaving Avi decided to take a photo on the computer of his genitals. He seemed to think they could use the picture to get Cochran into trouble.

Finney looked into the relationship between Ray and Cochran and uncovered the sex tape. He then summoned Cochran back to talk to him.

Cochran noticed that the fireplace poker, that Finney killed Varick with, was missing. Later he bribed his way into Avi’s secure storage and found the poker. He then showed up again at Finney’s house to show that he has it.

Elsewhere in the episode Daryll (Pooch Hall) was annoyed at Ray shutting down Mickey’s business so decided to steal Mickey’s car and run away with Michelle (Christy Williams). There was also a random scene where Terry showed off his Assassin’s Creed skills to Ray’s son Conor.

Right at the end there was also a hint that there may be feelings between Terry and Abby. That could really kick things off if it happens and it will be really interesting to see if it does.

The penultimate episode of the season is Poker. Mickey throws himself a going away party.