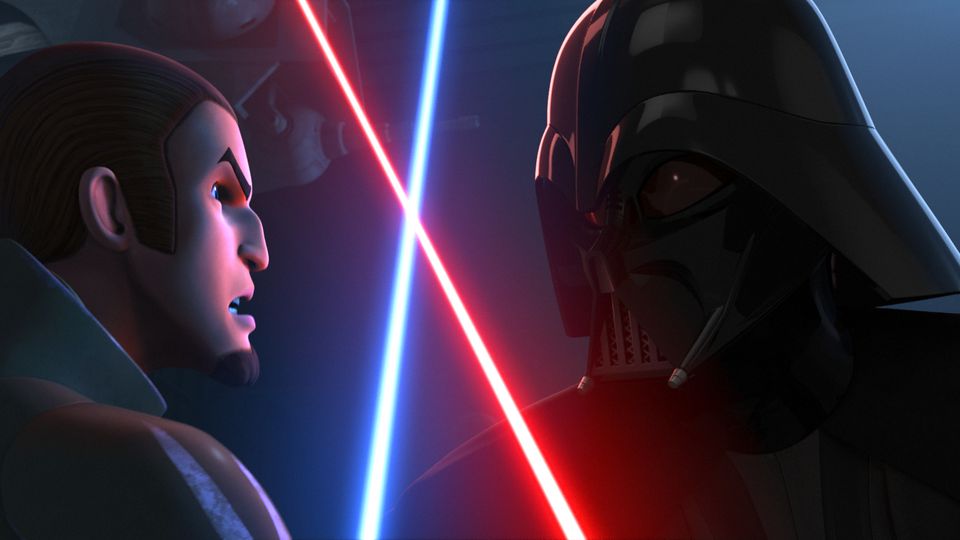 Want the inside scoop on the second season of Star Wars Rebels? You got it! We catch up with the cast and crew to bring you some intergalactic secrets on the animated action.

The story continues from a special titled Siege of Lothal, in which, after working with the rebel fleet, the Rebel crew returns to Lothal to save a defecting Imperial officer, only to be confronted by Darth Vader (voiced by James Earl Jones).

Prepare to discover a lot more about the gang on the Ghost in Season Two of Star Wars Rebels. “The first season introduced everyone to these new characters,” reveals executive producer Simon Kinberg. “It was also about integrating a new member – Ezra – into the family on the Ghost. We’ll delve a lot deeper into all of the characters’ back-stories in season two!”

STEP BACK IN TIME

What else can fans expect from Season Two? “Each of the characters is going to struggle with who they were and where they came from – and they will be confronted with their past,” adds executive producer Dave Filoni. “They are going to have to make a choice. Are they going to deal with those past conflicts and let them go? Or are they going to let these past conflicts drag them back down into where they were?”

“The nice thing about Season Two is that you get a broader look at all the characters,” continues Dave Filoni. “You’ll get to find out a lot more on Sabine, Hera, Zeb, Ezra and Kanan. Eventually, you’ll even get more of an in-depth back-story on Chopper and where Chopper’s from. You’ll get it all this year!”

Calling all Ezra fans! Want to know what’s in store for the young Jedi in the second season? “We will definitely be addressing Ezra’s parents in Season Two,” reveals Dave Filoni. “Now that he has this other family on the Ghost, we want to know what happened to his mom and dad. We’ve seen them visually in the show before, so you know what they look like – but they will definitely be part of the story of Season Two.”

“In Season Two, Ezra realises that he’s been given a great power, great ability and wonderful skills – but unfortunately, that also comes with greater evil, greater darkness and malevolence,” continues Dave Filoni. “Ezra starts to become aware of this dark presence in the galaxy, which is a frightening thing. If you truly are worthy of being a Jedi and wielding the power of the Force, you have to learn to do that selflessly. That’s the real pressure for him. That’s all within the story of Season Two.”

To say thank you for their hard work in Season One, the cast members of Star Wars Rebels were sent a ton of toys from the show – and they couldn’t be happier! “I spent a whole night putting together every LEGO set they sent me,” chuckles Taylor Gray, who voices Ezra. “I have the Ghost and I have each one of our characters. I also have a lightsaber. It’s Vader’s lightsaber, I believe! I love it all.”

What else have the cast members been given? “We were given some really cool stormtrooper helmets a while ago,” admits Tiya Sircar, who voices Sabine. “They had Sabine’s graffiti all over them, which was awesome! Vanessa Marshall [who voices Hera] and I also got presented with Sabine helmets. They’re so legit! I love them.”

James Earl Jones is the iconic actor who voiced Darth Vader in the original movies – and he’s back to voice the Dark Lord in the second season of Star Wars Rebels. “James Earl Jones is great,” states Dave Filoni. “You don’t have to direct him in the recording booth. He said to me, ‘I haven’t done this in 10 years.’ But everything he says sounds exactly like Darth Vader! I said to him, ‘You’re doing it right now without even thinking about it.’”

The creative team often pinch themselves when they realise they are working with iconic actors from the Star Wars universe, such as James Earl Jones. “[Star Wars Rebels sound editor] Matt Wood and I would often look at each other and high five each other whenever he wasn’t looking,” chuckles Dave Filoni. “It’s awesome to hear him in the sound booth.”

STARS IN THEIR EYES

When the cast members were told that George Lucas – the creator of Star Wars – adored their animated show, they couldn’t believe it! “One day, Dave Filoni casually mentioned that he showed the pilot to George and he loved it,” reveals Tiya Sircar. “We were like, ‘George saw the pilot?’ It was amazing that he’d seen it and loved it. We were over the moon!”

In Season One, Ezra was called a ‘space rat’ in the show – but many fans have now started to call him ‘Space Aladdin’ because he seems inspired by the classic Disney character. “That is a flattering comparison,” says Dave Filoni. “As someone who grew up in animation, Aladdin was a great character and a great film created by Walt Disney.”

In Disney theme parks around the world, talented Disney artists often hide images of Mickey Mouse’s iconic ear design in random locations on rides, buildings and attractions. These secret signs are called ‘Hidden Mickeys’, but don’t expect to see any in the background of Star Wars Rebels. “I don’t do Hidden Mickeys or anything like that,” admits Dave Filoni. “That’s cool for the parks, but animation is different.”

What can fans learn from watching Season Two of Star Wars Rebels? “I love how the show addresses the possibility of transformation,” explains Steve Blum, the voice of Zeb. “No matter what has happened in your life, there’s always a possibility of changing and growing and developing into something better – no matter what the odds. That’s really encouraging to me. I’m a father and I love teaching that to my kids. You can always change. That’s a wonderful message in the show.”

The show’s creators admit that there’s a lot of pressure in coming up with cool ideas for Star Wars Rebels. “There’s also an automatic pressure when you work on something with Star Wars in the title,” reveals Simon Kinberg. “Did we feel more pressure coming up with ideas for Season Two? Personally, I don’t feel like the pressure has increased or decreased. You always feel a responsibility. It’s like writing books for the Bible. Once you start, you know the pressure will be that strong throughout the process. It doesn’t go away!”