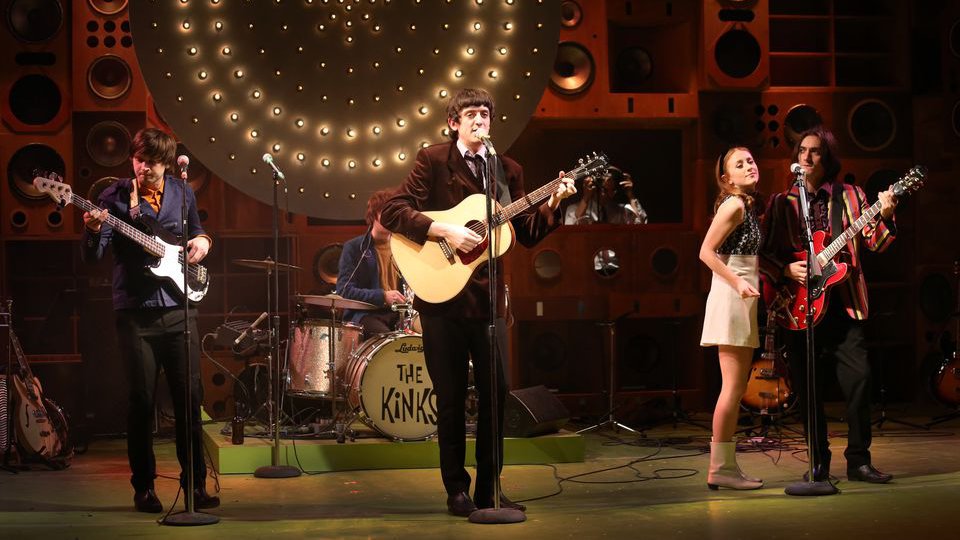 Sunny Afternoon is based on the 1960’s band, The Kinks. Sunny Afternoon is a musical with music and lyrics by Ray Davies and a book by Joe Penhall. The title of the show is named after their huge 1966 hit single, Sunny Afternoon. Hailing from North London, the show made its debut in 2014, at the Hampstead Theatre in London, before transferring to the West End’s Harold Pinter Theatre. We have spent many evenings at The Clissold Arms pub in Muswell Hill, which is where the band often performed and there is even a room dedicated to them and all things 60’s there. It is also on the street that the band grew up on – something we learnt about during the show, we also live on the same road, it really is a small world! It’s good to know we live on the same street as where they were born and raised, if only to show-off to our fellow music fans!

Sunny Afternoon is set against the background of political and social change during the 1960s and focuses on their early years as a band trying to break in to the music industry. It’s funny how not a lot has changed in terms of lead singers having to keep schtum over having a partner, for fear of offending their female fans (who often believe that they will marry them, or the like!) Included in the musical are life on the road and life on tour. Women, marriage, babies and sibling rivalry and also band rivalry, within the band. Such are egos of creative people – driven by talent and a need to perfection and a need to create something original. The music world is notoriously difficult to break and we witness management trying to change them, getting them to straighten their teeth and give the band a bit of polish, something that they weren’t comfortable with! There are many funny quips and references to rival bands during the 60’s.

You Really Got Me was the band’s third single release and we see how it was created, with lead guitarist Dave Davies creating a distorted power chord sound. The song was written by Ray Davies and went to No 1 in the UK charts and preceded a string of hits. Lola, Sunny Afternoon, Days, You Really Got Me, Waterloo Sunset, all of their classic songs are powered out throughout the show. The show is ever so cheesy and full of fun. It’s everything that you want a musical to be and the staging, costumes and cast all play a huge part in making everything come together to really work and show The Kinks off in style.

With Sunny Afternoon and with visits to The Clissold Arms, the spirit of The Kinks is alive and kicking every single day in London. We loved the show and we loved the melody finale, to see the show out with enormous energy and verve.