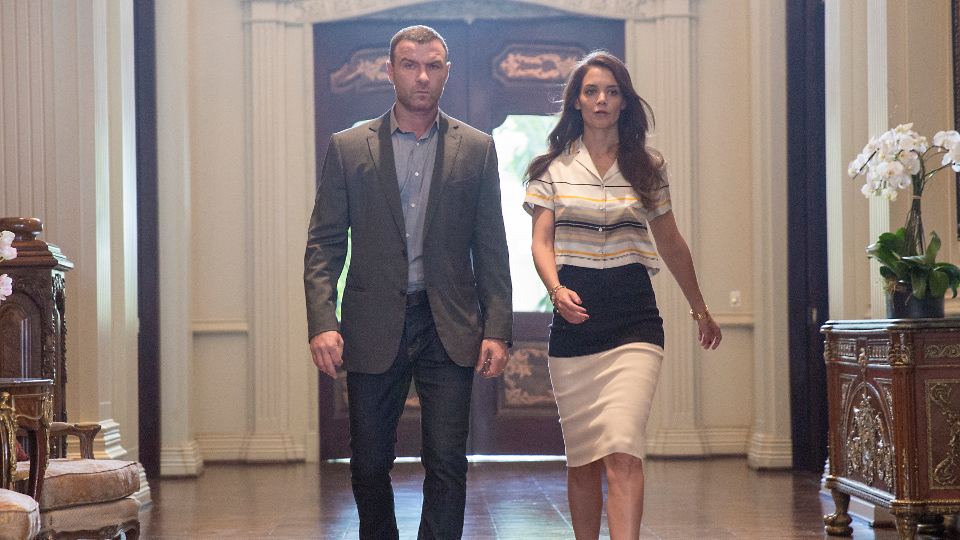 Happy moments seem rare for the Donovan family but the main theme in the latest episode was the wedding of Bunchy (Dash Mihok) and Teresa (Alyssa Diaz), what could go wrong? Thankfully this isn’t Game of Thrones but the life of the Donovan’s is never dull so it turns out plenty could and did go wrong.

A family dinner was held at Ray’s (Liev Schreiber) house in honor of Bunchy and Teresa ahead of their wedding. Abby (Paula Malcomson) spoke to give them her best wishes and Ray reluctantly did too. Meanwhile Avi (Steven Bauer) and Lena (Katherine Moennig) were tasked with doing a background check on Teresa and her crew. Ray wanted to make sure she’s not going to screw Bunchy over, especially as Bunchy wanted his money that Ray is looking after.

After a long time apart Ray and Abby shared a bed but were disturbed by Terry (Eddie Marsan) having a night terror. He was embarrassed when he awoke to find that he wet himself but Abby looked after him. Later she took him shopping and they had a lot of fun together. She also stood up for him when an elderly couple mistook him for a drunk because of his Parkinson’s.

Mickey (Jon Voight) went to see Detective Muncie (Michael Hyatt) to give some information to try and help his situation. She decided to use his position to try and setup a sting operation on the Minassians. All Mickey had to do was pretend to be the buyer for a group of underage girls they were planning to sell. To avoid prison he had no choice but to agree and was offered protection for his co-operation.

Mickey thought he’d be dead if he went through with it and also didn’t want to miss Bunchy’s wedding. He showed up at the precinct but decided to leave and lay low in a local motel with plans to run away after the wedding. His no show angered Muncie who went to Mickey’s apartment in search of him. Instead she found Ray and Bunchy then decided to arrest Bunchy instead. She agreed with Ray that Bunchy could be released if he brought Mickey in.

Ray eventually tracked Mickey down to The Octopus Motel and after a confrontation Mickey decided to do the right thing for a change. He was sent off on the sting operation wearing a wire while Bunchy was released so he could make his wedding.

Elsewhere in the episode Daryll (Pooch Hall) was getting close with Michelle (Christy Williams), one of Mickey’s prostitute girls, and Bridget (Kerris Dorsey) was taking drugs and went ten-pin bowling with Mr. Donellen (Aaron Staton) who admitted that he’s attracted to her.

Finally former FBI agent Ed Cochran (Hank Azaria) returned. He now works for some kind of investigative firm who are looking into the shareholders behind the NFL deal due to Varick’s (Jason Butler Harner) disappearance. Cochran is given the case to look into and spots Ray’s name on the paperwork. Cochran was a fantastic character last season and we can’t wait to see more from him, we’re sure he’ll be going after Ray any way he can.

The next episode of the season is One Night in Yerevan. Ray attempts to help Mickey. Bridget gets into a fight.