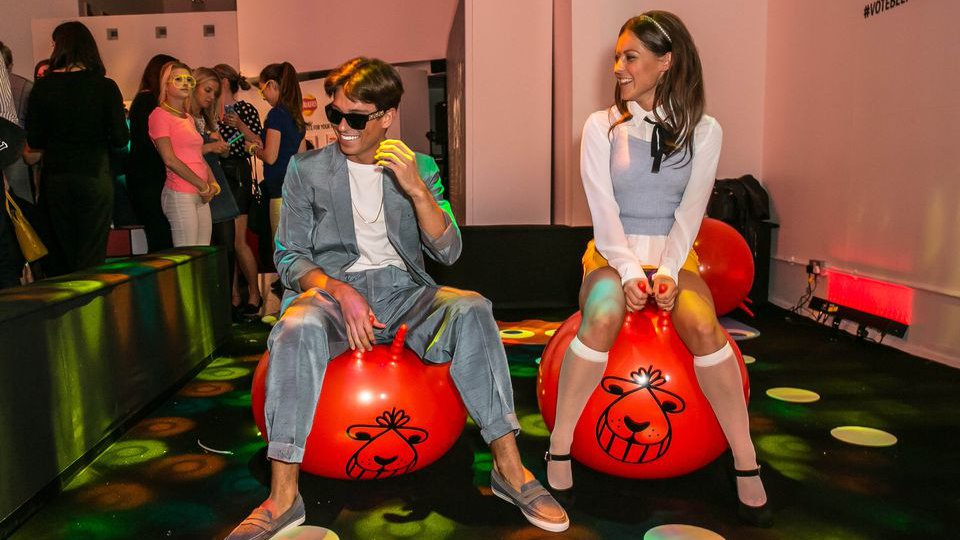 Joey Essex and Louise Thompson go back in time as they race on a Space Hopper course at the Walkers Bring it Back launch event celebrating the return of five Walkers flavours. The public can vote for which flavour will be back for good and also be in the chance of winning £100,000.

Walkers crisps are about to bring back a new flavour for us to try! Will it be Lamb and Mint, Beef and Onion, Toasted Cheese, Cheese and Chives or Barbeque? We were invited to the launch and had fun chatting to the likes of Joey Essex, Jodie Kidd, Louise Thompson from Made in Chelsea, Sarah Harding and of course, Gary Lineker. Gary was keeping mum about which crisps he wants to bring back, he wasn’t allowed to say. However, after trying them, we really loved the Lamb and Mint and want that to come back, please! We’ve had a peek at the upcoming Walkers crisps adverts and Gary’s attire and character outfits are guaranteed to bring a smile to your face. We rather liked his punk rock look!

The theme of the evening was everything 80’s, so giant space hoppers, retro sweets, retro games and 80’s music meant that it was a fun theme, for a fun event. Of course, there was unlimited crisps around the room and the waitresses and waiters were rolling around on roller skates. We think that Gary was meant to look like a New Romantic, but when asked, he said he thought he looked more like Jack Sparrow! Gary said that he gets through endless bags of crisps whilst filming the walkers commercial and enjoys every minute of it. When prompted as to what he thought about Wales being ranked ahead of England in the official FIFA rankings, this was met with a smirk and a shake of the head, as one of England’s finest footballers, who can blame him for that reaction – although his wife (being Welsh), is very pleased! And as for our question as to why Everton games are always shown last on Match of the Day? This may not be true, but purely a coincidence when the show gets broadcast!

Joey Essex and Sarah Harding are huge fans of the new flavours and had a great time playing on the retro games. When we asked Sarah how many bags she would get through a month, she stated that she already had two bags that day! Sarah also mentioned that her favourite 80’s bands included Bananarama and The Bangles, very fitting from the former Girls Aloud star, we love a good girl band. Also at the evening was a giant foot piano, as in the one used in the Tom Hanks film – BIG, we loved it! All in all, a very fun event. We look forward to seeing which flavour crisps will officially be voted to ‘bring it back’.

The nostalgic limited edition flavours are available from today in 32.5g single bags and variety multipacks of 6 and 24.