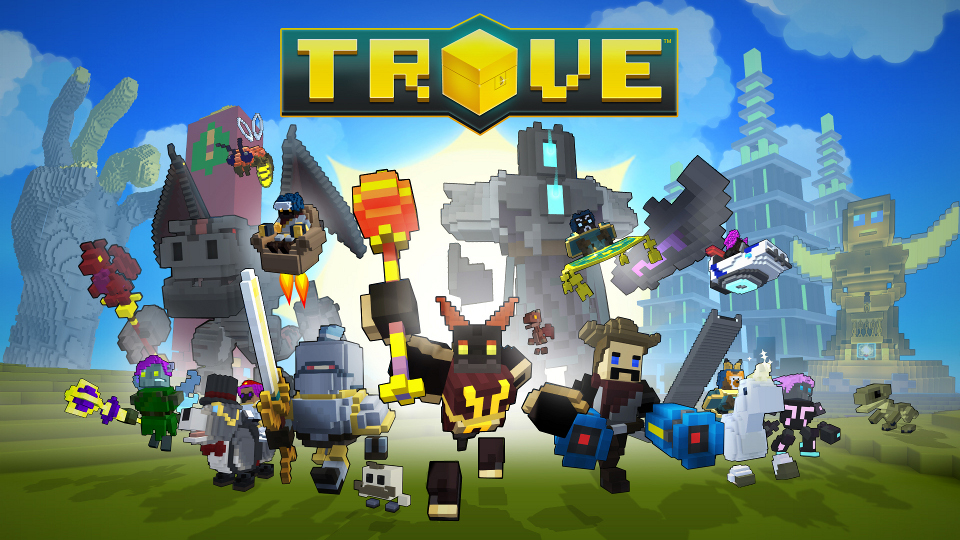 Trove was first revealed by developer Trion Worlds almost two years ago. Since then it’s moved from Alpha to Closed Beta then Open Beta in November 2014. It eventually released in July 2015 but it was a problematic launch with lengthy queues and unstable servers.

Fortunately things have been a lot more stable recently as the developers have got on top of the launch issues. I’ve been dipping in and out of it over the past month to find out what it’s all about and to see if it’s worth your time.

At first glance it’s easy to dismiss Trove as just another Minecraft clone. This is because everything is made up of blocks which you can harvest for their resources. These resources can then be used to craft items or build structures.

Although it is similar in some areas Trove is actually a very different experience. It’s best described as an open-ended free-to-play MMORPG and it features three main ways to play which are Adventure, Exploration and Creation.

Upon entering the game for the first time you have a short tutorial to complete. After this you spawn in a starting area with other players each time you enter. Your character is moved using the WASD keys with the mouse to look around. The mouse buttons are mapped to your abilities once you unlock them or you can use the number keys. Spacebar lets you jump, double jump or glide if you have wings while Shift lets you dodge. Various other keys are needed to access your inventory, character sheet, map and more.

Initially you only have one class available to you but there are a further 10 to unlock. Each class has their own unique look, play style and skills. Classes that you have unlocked are levelled up separately by gaining XP from activities such as defeating monsters in combat. A really neat feature is that you can instantly switch classes whenever you like.

From the starting area you have several options of where to go next. You can opt for one of several Adventure Portals of varying difficulty or head to a Club World. After joining an adventure world your first task is usually to seek out and claim a cornerstone. Doing so spawns your own personal house into that world. This is a really cool feature because you can customise your house as much as you like and when you move to another world it always goes with you. It’s possible to check out other players cornerstones too.

When on an adventure you can use the Tab key to switch between adventure and build mode. Adventure mode is used for fighting while build mode lets you harvest materials and create structures. You can also use and create crafting stations in order to create all kinds of items.

After setting up your house a peek at the map will point you in the direction of dungeons and lairs. Lairs are mini dungeons designed for one person to tackle. There’s usually a small number of enemies to defeat before taking on the final boss. Beating a lair results in a chest filled with loot.

Dungeons are far bigger, more impressive and provide a real challenge. They are filled with all kinds of enemies, traps and bosses too. You can try these solo but they are easier and more fun with other players to lend a hand.

Another option in adventure mode is to just simply explore. Each world is unique and randomly generated so you never know what you might find. The area is divided up into different biomes to explore. Using a mount is a faster way to get around and Trove has many other options including boats, mag rails and even dragons.

Creative players will want to create or join a Club World. These are a shared spaces where players can build together in order to create the world of your dreams. Maybe you want to build your own city, recreate a location or have a themed world. Your imagination is your only real limitation and Clubs Worlds can be a relaxing way to play. Checking out other Clubs is also great fun to see what they have created.

The game has two types of currency – cubits and credits. You can earn cubits by playing the game but credits are only obtained by spending real cash via in-game purchases. Credits start at £3.99 for the smallest pack of 750. The biggest credit pack is 18,500 which will cost you £76.49.

Another option to spend money is the Patron pass which is available in 15 (£5.49) or 30 (£9.99) day versions. These passes give you boosts to various stats including 50% experience gain. The in-game store tends to keep things interesting with bundles you can buy such as costume bundles. It’s also worth keeping an eye out for special offers to save cash.

Thankfully the game isn’t really limited if you aren’t able to spend money on it. Most items, including new classes, can be bought with credits or cubits. The difference is that it might take you longer to earn the cubits. Certain items can only be purchased with credits though so it you want a nice new costume or mount for your character the only way to do so is via credits.

Ambitious players can create their own items, cornerstones, dungeons and lairs then submit them to the Trove team. Creations that get approved get added to the game and the creator gets rewarded with credits or cubits. The creator also gets their name included in the tooltip for the item.

Trove is a generous and addictive free-to-play game that is perfect for the younger gamer. There’s so much to do that it’s hard to cover everything in a single review and the developers are constantly adding to the game. Older gamers who enjoy MMOs or have a creative side should enjoy the game in short bursts too. It’s also a great game for families to play together.

Trove is well worth checking out and you can do so via the official Trove website.

In this article:PC, Trion Worlds, Trove