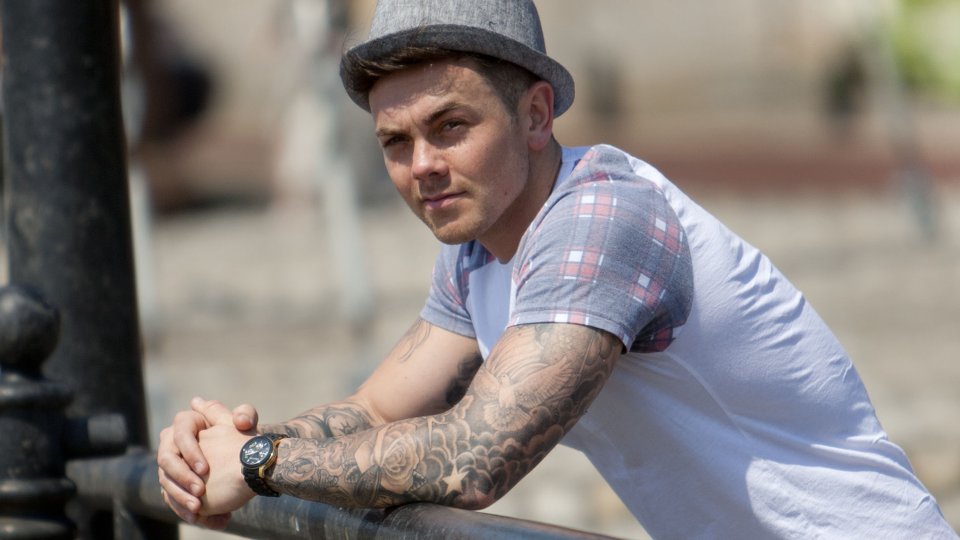 Ray Quinn first came to our attention when he starred as Anthony Murray for three years in Channel 4’s massively underrated soap, Brookside (we always loved the original storylines!). He has never really left our attention since, as he has always been in high demand, due to his talent not only as an actor, but also as an accomplished dancer and singer.

With his appearance on 2006’s X Factor, Ray’s profile shot up ten fold. With his warm personality, down to earth attitude and a great voice, Ray came second in the competition, missing out on the top spot to the wonderful Leona Lewis. It’s hard to believe that it’s been that long, almost a decade since that season was on our screens. It’s hard to imagine isn’t it? We also saw his impressive ice skating capabilities when he won Dancing on Ice. Is there anything this gent can’t do?

Ray has packed in so much over the last few years. He has appeared in a number of high profile musicals and has worked with an array of big names. Ray is currently working on his second album, which will be a change in direction from him and one in which may gain him even more fans. He is also soon to be starring in Puttin’ on the Ritz. Phew, all of his hard work is making us feel tired, just thinking about it!

Here is our interview with the very lovely Ray Quinn.

Hi Ray and welcome! How are you doing today?

Hi Carys, thanks for having me. I’m really well thank you, look forward to chatting to you!

You’ve got so much going on lately, so firstly, let’s start with your new album! Can you tell us how the recording of your album is going?

Yes the new album! So the recording of the album is going really well, I’m spending loads of time in the studio and really enjoying it, it’s giving me chance to really focus on the new music and direction. It is all original material that we are creating. Everyone is putting so much time and hard work into this album, it has really come into its own and I’m really excited to hear the response when it is finished.

Who are you currently working with?

I’m currently working with an amazing group of people at Troika studios in Kings Cross, a team of writers, musicians and producers that are so talented. We work together really well and we bounce off each other in the studio.

Ha ha, well I’m always on time! I love to just get involved and like I said, we all got on so well with each other.

We hear that your new album will be a change in musical direction; can you tell us more about that?

The change of direction in the album is an exciting time for me. It’s a big move and it’s all brand new material. I’ve taken a long journey with my team of writers to put together this album, I’m so excited, the music is great, it’s all original stuff and it brings you right up to date, its contemporary. I guess it is also a reflection of me as a person, and how I am growing as an artist, it’s really exciting! As far as the change in direction goes, it is completely different to what I have done before, and as I said it is a lot more current.

When will the new album be due for release?

The album will be finished and due for release early on next year.

We hear that you’re on a massive health kick and currently going through a big image change, hitting the gym hard and training with well-known champion body builder Neale Cranwell! What look are you aiming to achieve and what’s it been like having Neale put you through your paces, it sounds like hard work! What does your training schedule look like?

Yes it is really hard work, but I enjoy it and I like to stay motivated. Neale is a great guy, and I’m lucky to have him training me. He does work me hard but that’s all part of it haha! You have to put in the effort. He knows what he is talking about and it’s just about getting it right and working out the right regime for me personally. I love the gym though, I train three to five times a week to keep in shape and stay healthy. It can be hard because I’ve got so much stuff going on at the moment with recording and shows, I’m aiming to look the best I possibly can.

You’ll be playing in the Celebrity Soccer 6 matches for charity this year alongside Joey Essex, Rudimental and many more. Are you good at football too?

Erm, I wouldn’t say I’m amazing (laughs), but I really enjoy doing it. It’s a loads of fun and the guys all get on really well and we all have a laugh and a bit of banter. Looking forward to the next one!

This year, you were chosen to be the official ambassador of The Children’s Variety Charity. Can you tell us about what this role involves?

Yes, it is an amazing cause, they do a brilliant job of helping to improve the lives of sick and disadvantaged children. I am thrilled and honoured to be part of such an incredible charity. Variety’s work with children and young people is awe-inspiring and their dedication and enthusiasm to their cause is amazing. I do everything I can to support the charity and help raise the vital funds they require to continue with their wonderful work. We recently did a charity event at the Hilton in Liverpool and the next event is in Manchester later on in the year. I’ll be performing and helping to raise money.

Tell us what it was like performing at the Jazz Club in Camden, where you were supported by legendary Linda Lewis and Sam Bailey?

Oh it was fantastic, it’s such an iconic venue and I loved every minute of it. The place has got such a great atmosphere. I’ve known Sam for years so it’s always great to see her. She’s got such talent, and Linda what can I say, she’s such a lovely person and such a legendary artist, singing with her was a lot of fun.

What was is like performing at Leeds Pride, this year?

Leeds was absolutely amazing, performing in front of such a massive crowd was incredible. They were buzzing and it was great for me to give a taster of my new material, it went down better than I could have hoped and the atmosphere was incredible. Gay Pride really is a great event, it’s something I will always show my support for.

What do you like the most about performing live and how do you compare that experience, to singing in a studio, for example?

You’ve appeared in numerous musicals, including Grease, Dirty Dancing, Legally Blonde and The Rise and Fall of Little Voice. What was your favourite show to be a part of?

Grease was the one that I found most rewarding because physically it was a lot more demanding than the others. I’m quite a physical person anyway, so I enjoyed the exercise as well as the show. It was amazing to be performing a dream role as Danny Zuko.

Tell us what is was like playing lead in The Songbook of Judy Garland, which you starred alongside Judy’s daughter Lorna Luft?

The Judy Garland show was a show where I didn’t know what to expect when I joined because it was an original, but Chris Manoe and Arlene Phillips, our creative directors put together an amazing show that I was really proud to be part of. The role I played was very much an all-round performer and I loved doing that, it was such an inspirational show to be part of, the whole cast were incredible.

What was is it like sharing the stage with Lorna and did you get to know each other well off stage?

It was an honour, she is such a wonderful talented and interesting women. We all spent a lot of time together rehearsing for the show and going on tour so we got to know each other pretty well yes, she is an amazing lady and we will stay in touch.

You’ve been recently filming for Channel 5 Spike TV, as they have been following the progress with the help of celebrity tattooist Kevin Paul to go to parliament and change the laws on tattooing, to make it safer for the public. Why is this so important to you?

I believe that tattooing is very much mainstream these days, you know, one in three of us has a tattoo, and three out of five people who have them regret at least one. It’s about making the public aware of the dangers of poor practice, and getting some regulations set up to stop bad or harmful tattooing. At the end of the day, if you’re doing it safely and correctly, taking your time that’s fine but there is a real grey area. At the moment anyone can open a shop and start tattooing. I found someone who I really trust to do mine, Kevin Paul, he is actively working to change the laws and gives so much dedication to the industry. I wanted to help him back that up by endorsing the whole campaign.

Your first book This Time Round, was runner up in The Peoples Book Prize awards. You must have been pleased with the reaction that the book received?

Yeah I was pleased, I’m hoping to rewrite a few chapters and re-release it at some point but I’m really happy with the response.

Advertisement. Scroll to continue reading.
In this article:Puttin' on the Ritz, Ray Quinn