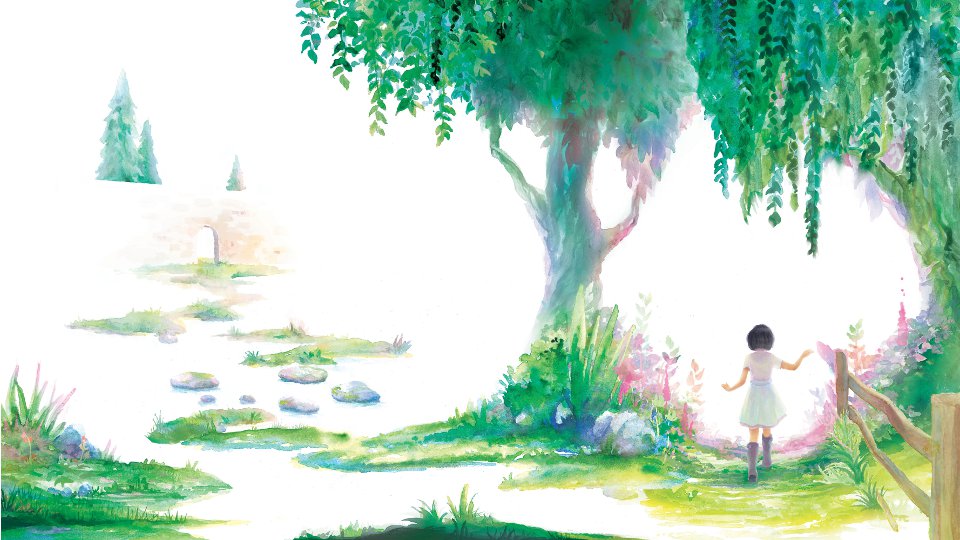 Beyond Eyes tells the tale of a Rae, a 10 year-old girl who lost her sight in a terrible firework accident when she was younger. The traumatic experience has left her with a fear of many things including loud noises and public spaces. These days she spends her free time in her garden where everything is familiar and she feels safe.

The accident has also left her rather isolated from the real world but she’s surprisingly content. A huge part of her life is a stray cat that she has befriended. The cat, which she has named Nani, often visits her in her garden and has become her only real friend.

One day Nani stops visiting Rae and she becomes very worried about her. Eventually she plucks up the courage to venture out of the garden in search of her feline friend. Beyond Eyes is split up into six chapters that follow Rae in her search for Nani. Each chapter covers a different area beyond the safety of her garden and features new obstacles for her to overcome.

As Rae is blind she must rely on her remaining senses, her limited experience of the world and plenty of imagination to get by. Her journey is played from a third-person perspective and uses some unique game mechanics to convey the challenges that her blindness causes her.

Rae has one movement speed which is a cautious walk. With so many games allowing you to run around at break-neck speed this can be quite frustrating to get used to. We imagine some players will also be put off by it. It might have been nice if Rae was able to move a little quicker through areas that she has previously explored. However it fits the game and reminds you how difficult it must be to move around when you can’t see.

The world around Rae is mostly hidden to the player and is simply white. The only objects that are seen are those immediately surrounding her. As Rae explores her surroundings the world around her appears and is created with a lovely painted aesthetic. Coloured visual indicators trace paths across the screen to show her different senses in action.

When Rae can hear things in the distance such as a bird in a tree, a water fountain or Nani the cat the object appears while it’s making noise. This helps guide Rae around and towards items of interest in areas that she hasn’t explored.

As Rae ventures further parts of the world that she has explored or that are familiar to her remain. Everything that is unknown is white until explored and areas that she perceives as dangerous are shown as black clouds.

A really neat idea is when Rae can hear something but isn’t sure what it is. For example in her garden she is used to the sound of clothes drying on the washing line. At one point in her adventure she hears that familiar sound but it’s only when she gets up close that she realises the sound is made by a scarecrow. This also comes into play when objects that she remembers being in one place aren’t actually there when she returns, such as a car moving.

The game does a good job of making the unknown feel scary with its use of colour and sound. Rae’s body language also changes to reflect how she’s feeling and it’s easy to spot when she feels nervous or uncomfortable about a situation. The piano music is beautiful and also brings a lot of emotion to the game.

As well as helping Rae slowly finding her way around you also need to deal with light puzzle elements. There’s nothing particularly taxing about any of these but they do help a little variety. There are also optional things to discover and do which will reward players prepared to explore a little further.

It’s worth pointing out that this is a rather short game. Most players will get through the story in around 2 hours. Completionists who like to explore everything and grab all the achievements should expect it to last 3-4 hours.

Typical of an indie game Beyond Eyes dares to do something different and for the most part it succeeds. It’s not a game that you’ll come back to often but it is one that you’ll want to tell people about so that they experience it for themselves. Rae’s journey is an emotional one and well worth taking.

In this article:Beyond Eyes, Team 17, Tiger & Squid, Xbox One