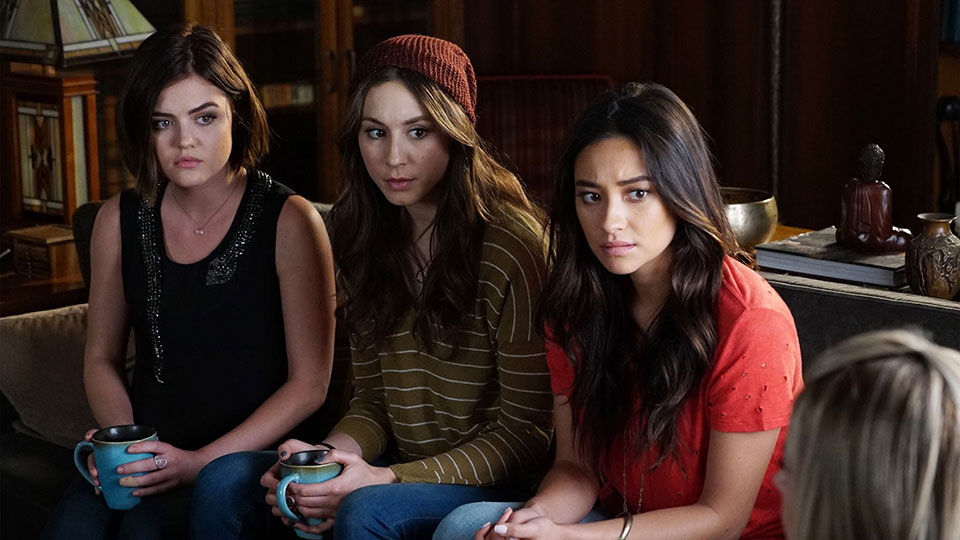 The hunt for Charles was on this week but he still managed to slip under the radar with a little help from someone familiar.

Hanna (Ashley Benson) was adamant that she didn’t want the scholarship money from the Carissimi Group and tried to meet Kenneth DiLaurentis (Jim Abele) with Ashley (Laura Leighton) to find out where the money came from. When they turned up at his office they were put off by the media storm building and decided to try and contact him away from the cameras.

That didn’t stop Hanna though. She teamed up with Spencer (Troian Bellisario) to meet with Rhys Matthews (Caleb Lane) from the Carissimi Group. The girls went to his office under the guise of returning the money but really they were searching for links to Charles. Hanna went into overdrive convinced that the room was bugged and they were being spied on.

Neither could believe their eyes when Rhys greeted them as he had a striking resemblance to Jason DiLaurentis (Drew Van Acker). Hanna managed to take a sneaky photo on her phone as she pressed Rhys for the contact details of his mysterious employer. Rhys said he couldn’t give those details out but would speak to his employer about Hanna’s change of heart regarding the scholarship money.

Aria (Lucy Hales) was dismayed about not going to the gallery where her work was going to be exhibited. Focusing on the chance to get a summer internship in L.A. for her efforts, Aria decided to convince Ella (Holly Marie Combs) to let her go following a conversation with Clark (Titus Makin Jr). Aria turned to Tanner to ask for police protection for the evening to ensure that nothing could go wrong and she and her friends would be safe.

Emily (Shay Mitchell), Spencer and Hanna arrived to support Aria and during the unveiling they were all shocked to see pictures of them unconscious from their time in the bunker displayed rather than Aria’s artwork. Under the pictures was a caption that suggested either Charles wants to steal the girls back or that he was targeting Tanner for interfering.

Ella was furious with Tanner for not doing more to protect the girls, and Aria had a heart-to-heart with Ezra (Ian Harding), whom she’d earlier asked to go to prom with her. She was shocked to see him bring Nicole (Rebecca Breeds) to the gallery but he assured her it wasn’t a date and that he was considering doing the same programme Emily had done previously.

As Aria chatted with Ezra, the rest of the girls spotted Rhys parked across the road from the gallery and they followed his car to the abandoned doll factory. Keeping an eye on his movements, they didn’t see him come out but they did see Clark arriving. Rather than investigate further the girls went straight to Aria’s and told her what they had seen. Seems Ezra was right when he told Aria not to trust Clark earlier on in the episode.

Tanner reviewed footage from the gallery and saw someone who looked very like Rhys (or was it Jason?) handling Aria’s pictures.

Anyone who thought that Alison (Sasha Pieterse) had turned over a new leaf recently was proven wrong this week. After taking a verbal beating from Hanna, who dropped a whole load of truth bombs about her feelings towards Charles, Ali hid away in Lorenzo’s (Travis Winfrey) apartment whilst he recovered from his injuries following last week’s confrontation with Charles. After making him homemade soup, doing his laundry and sharing a kiss, the devious Ali we all know and love returned as she stole Lorenzo’s police ID whilst he slept on the sofa.

Heading straight to Rosewood PD, Ali sneaked around until she found the evidence room for the case against her brother. As she searched through the room she was caught by Tanner. The two women shared a tense conversation and Ali was alarmed to realise that the plan was to kill Charles as soon as he was located. Tanner confiscated Lorenzo’s ID from Ali and asked her to leave the station.

Ali went back to Lorenzo’s where he was waiting for her furious. Tanner had been in contact and informed him that he would be disciplined for Ali’s actions. Ali tried to explain her behaviour but Lorenzo admitted he couldn’t trust her and felt that she’d played him.

Two heads are better than one

This week saw the return of Red Coat who is working side-by-side with A / Charles. We first saw her accompanying A / Charles to watch the video feeds from the art gallery, then she was seen spying on Ella and Ashley through the Marin house kitchen window. At the end of the episode she was seen behind the wheel of a limo and it was revealed that she and A / Charles had tickets to the prom. It also seems like the plan is to kidnap the liars during the event…

Pretty Little Liars continues Tuesday at 8/7c on ABC in the US and Wednesday on Netflix in the UK. Watch the promo for next episode Last Dance below: