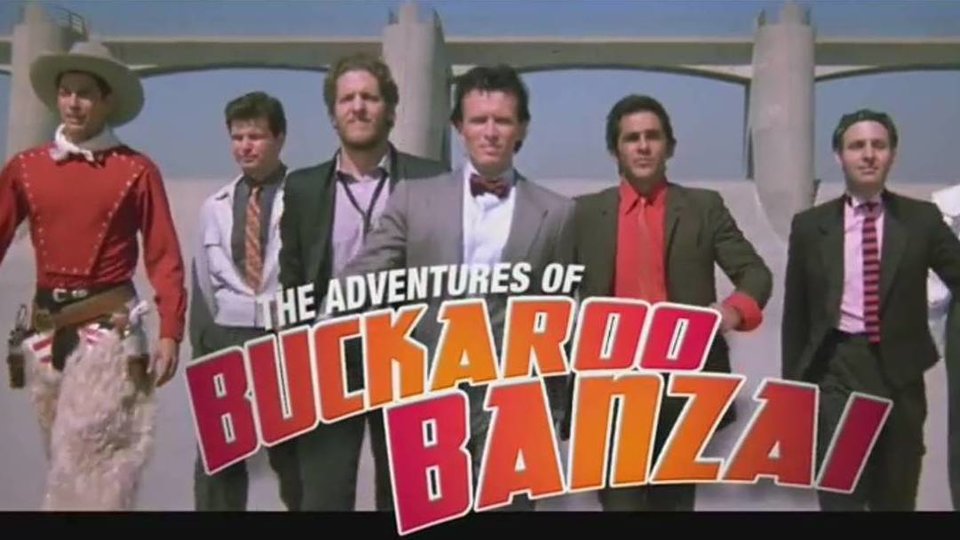 Arrow Video is thrilled to announce the UK premiere Blu-ray release of 80s classic The Adventures of Buckaroo Banzai: Across the 8th Dimension which went on to become one of the decades defining cult movies. Starring Peter Weller, Christopher Lloyd, Ellen Barkin and John Lithgow, Buckaroo Banzai draws heavily from its principle influences, namely the pulp adventures of 1930s sci-fi, making this very much a film made by fans for the fans and counts noted filmmakers including Wes Anderson and Kevin Smith among its admirers.

Coming loaded with a host of exclusive and archive extras, this new disc is the complete and definitive home entertainment release of Buckaroo Banzai featuring an audio commentary with writer-director W.D. Richter and Reno (writer Earl Mac Rauch) and an archive Q&A with stars Peter Weller and John Lithgow moderated by filmmaker Kevin Smith.

Alongside this, the disc will also feature brand new interviews with Weller and Lithgow, Buckaroo Banzai Declassified an original featurette on the making of the film featuring W.D. Richter, stars Peter Weller, Ellen Barkin and John Lithgow, as well as a visual essay by critic and author Matt Zoller Seitz. Other exciting features include an alternate opening featuring Jamie Lee Curtis and a host of deleted scenes taken directly from the workprint.

Rounding off the Blu-ray is the iconic, title-free closing sequence, trailers, Banzai Radio, Easter Egg and a gallery, presented with original and new artwork packaging by Matthew Griffin and a collector’s booklet with new writing on the film by critic James Oliver and illustrated with original stills.

From the writer of Invasion of the Body Snatchers and Big Trouble in Little China comes a pop-sci-fi adventure that defies convention and went on to become one of the cult hits of the 80s.

Peter Weller is Buckaroo Banzai, a physicist-neurosurgeon-martial arts master-secret agent-rock star who has just made history with his invention, the Oscillation Overthruster. The Overthruster allows him to travel to the 8th Dimension, but this feat draws the attention of the Red Lectroids, an alien race (led by Christopher Lloyd) who have teamed up with Banzai’s nemesis, the deranged Dr Lizardo (John Lithgow). Lizardo and the Red Lectroids are seeking the Overthruster to take over the world and Banzai, with his team of agents/band musicians, The Hong Kong Cavaliers, must stop them before it’s too late!

With strong references to sci-fi and pop culture that span Thomas Pynchon and Orson Welles, Buckaroo Banzai is a film made by fans for fans and counts filmmakers including Wes Anderson and Kevin Smith among its admirers.

To be in with a chance of winning one of 3 The Adventures of Buckaroo Banzai: Across the 8th Dimension Blu-ray’s, simply answer the question below.

Advertisement. Scroll to continue reading.
In this article:Buckaroo Banzai, Competition, The Adventures of Buckaroo Banzai Across the 8th Dimension