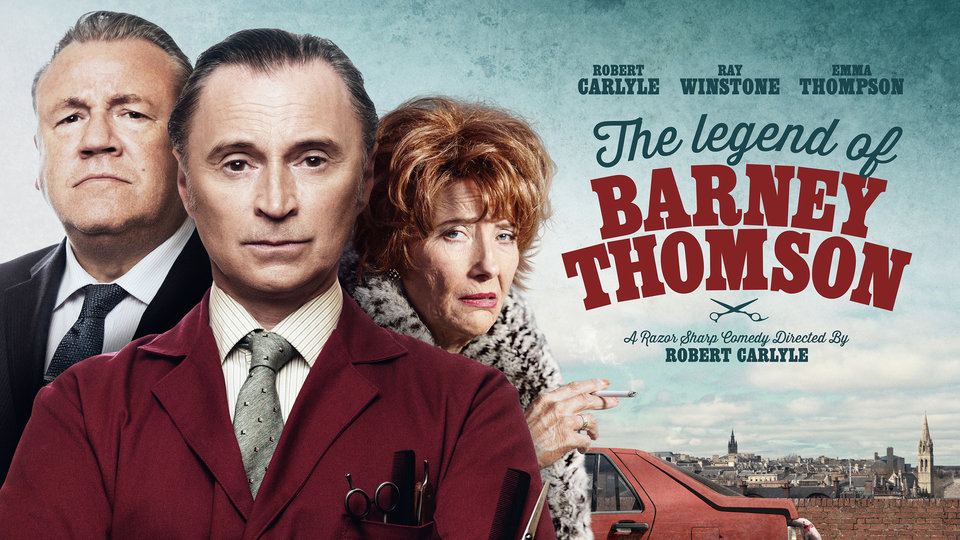 In addition to directing the film, Carlyle plays the titular antihero Barney, alongside a standout cast including Emma Thompson, in one of the most transformative roles of her career. Playing the role of Cemolina, Barney’s cantankerous, carousing mother, she is dramatically aged into character by Academy Award winning Make-up & Prosthetics Artist Mark Coulier (The Iron Lady, The Grand Budapest Hotel).

A wealth of Scottish acting talent offer support, including Ashley Jensen, Martin Compston, Kevin Guthrie, Stephen McCole and Samuel Robertson.  Filmed entirely around iconic locations in Carlyle’s beloved hometown of Glasgow and adapted from a highly successful series of novels by Scottish author Douglas Lindsay, The Legend of Barney Thomson is a gutsy, macabre and hilarious crime thriller, with a pitch-perfect performance from Carlyle as the archetypal underdog.

The Legend of Barney Thomson tells the tale of Barney (Carlyle), a hapless barber, devoid of charm and ‘patter’ as his fellow barbering brethren mockingly remind him.  Barney’s mediocre, mundane life of plotting for a way up is about to be transformed, following a typically incompetent fit of pique, when he inadvertently stumbles into serial murder, and with it headlong into the trail of a grotesque series of killings gripping Glasgow.

As he makes ham-fisted attempts to cover his tracks, he finds himself on the run from the bearish Detective Inspector Holdall (Winstone) and a testosterone-driven local Police task force at each others throats over the ongoing crimes. With his sanity threatening to unravel, Barney fatefully turns to his domineering, emasculating mother, the formidable Glaswegian ‘good-time girl’, Cemolina (Thompson). There’s no turning back now and the path that lies ahead for Barney may yet be littered with more murderous consequences than he could have ever anticipated.