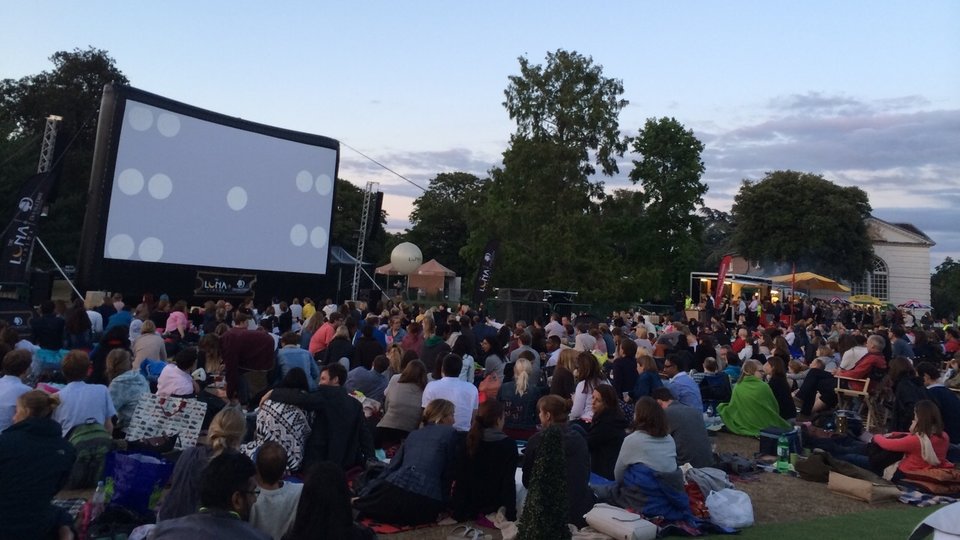 The Luna Cinema, the premier outdoor cinema event, is well into its brand new season of films. Making a triumphant return with film screenings taking place across the country in very special venues – they’ve just hosted the first of four evenings at the lush surrounds of Kew.

The Grand Budapest Hotel was first up and it delighted record crowds last night as the weather held out for a glorious summer’s evening.

The Luna Cinema has prided itself on getting bigger and better with every passing year and this, EF’s first Luna Cinema screening of the season, really showcased some amazing new features.

The Luna Bar with Estrella are onsite serving a full selection of alcoholic and non-alcoholic drinks including Estrella beer, prosecco, a selection of wines, spirits and soft & hot drinks. Their fantastic catering partners Gastrocircus serve delicious hot food from a range of vintage vehicles, including a variety of wood-fired Roman pizzas made freshly onsite from a converted classic London black cab (complete with a deli-style salad bar), street-style BBQ served from the Genuous zebra truck and hot gourmet nachos from old school porter trolleys.

The DoubleTree by Hilton is The Luna Cinema’s partner this season and they have a great competition running before the film. Have your picture taken at their designated booth and before the main feature plays, they will pick the best photo. The winners then get to watch the movie from the swanky comfort of a genuine DoubleTree by Hilton hotel bed set up in the middle of the viewing area, complete with free champagne and treats!

The Luna Cinema’s slate at Kew includes Back to the Future on July 23rd (including a DeLorean photo op!), Casablanca on Sep 3rd and Mamma Mia! on Sep 4th.

The Luna Cinema have also just announced that they will be screening films at the world famous Victoria Embankment Gardens in August and September. Tickets are onsale now but be quick, they are sure to sell-out fast!

The movies appearing at Victoria Embankment Gardens are Ghostbusters on 18th Aug, Napoleon Dynamite on the 25th Aug and Mean Girls on Sep 8th.

Advertisement. Scroll to continue reading.
In this article:Back to the Future, Kew, Kew The Movies, Luna Cinema, Summer Film 2015, The Grand Budapest Hotel, The Luna Cinema