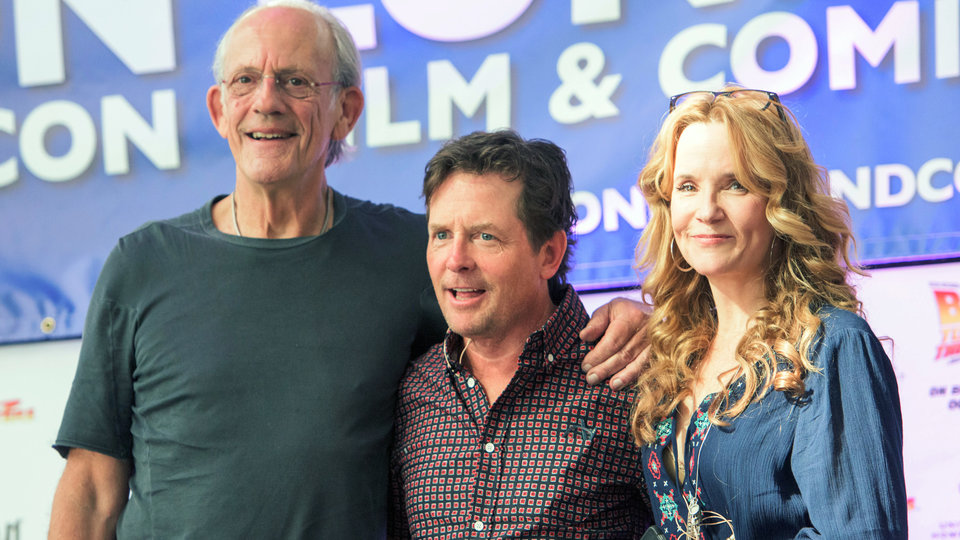 The London Film and Comic Con brought some serious star-power to the capital this weekend when Olympia welcomed a truly unique event. With crowds snaking around the world famous venue, thousands of fans flocked to London to witness an unforgettable weekend of wonder.

On Sunday the whole cast did a reunion panel to a capacity crowd that featured some great moments. Harry Waters Jr. gave us an impromptu performance of ‘Earth Angel’, Michael J. Fox and Christopher Lloyd discussed the enduring appeal of the movies and Lea Thompson & Claudia Wells spoke about how amazing the BTTF fans were. The whole cast were on great form, sharing stories and experiences that had the audience enthralled.

Showmasters was a proud partner with Universal Studios to bring this reunion experience to audiences, as well as supporting The Michael J. Fox Foundation for Parkinson’s Research with Showmasters’ ‘Up To 88!’ fundraising campaign, in conjunction with Team Fox. ‘Up To 88!’ aims to channel the fan force of the Back to the Future movies and raise $88,000 by 21st October, 2015 – otherwise known as Back to the Future Day!

A whole host of other stars were also in attendance across the weekend including Bill Paxton, Hayley Atwell, Sigourney Weaver, Michael Gambon, Neve Campbell, Robert Englund, Sherilyn Fenn and performers from Star Wars, Harry Potter, Gremlins, WWE, sci-fi & cult movies and more. Throw in TV cast members from shows like Game of Thrones, Penny Dreadful and Dr. Who and you have a combined amazing line-up of talent that fans could meet and get autographs and pictures with.

The first two floors housed most of the stalls, photo opportunities, autograph sessions and merchandise. It soon built up and before long you couldn’t move without coming across something very cool and desirable.

With panel stage-talks and plenty of cosplay too (the effort people put into making their outfits was staggering), the LFCC was jam-packed and we struggled to see and do everything, even though we attended for all three days. The sheer amount of amazing attractions can overwhelm you so it’s best to attend these conventions with a clear idea of your priorities on the day.

The cast of Back to the Future reunite onstage for the 30th Anniversary talk.

The Gaming Zone was a very welcome respite from the chaos and crowds downstairs. Here is where you found a retro-oasis of awesomeness. Set up were consoles from across the years and you could play all of them! Fancy a bash on a Sega Megadrive or perhaps you wish to go old school with a couple of rounds of Street Fighter 2 on a SNES? This playable area was fantastic and gave the older generation a cracking trip back down memory lane whilst introducing younger fans to the legendary titles that graced the home gaming arena from yesteryear. If that wasn’t enough, there were game-inspired cosplayers everywhere, fully embracing the vibe of the convention and giving the games area a great atmosphere.

The upper floors also welcomed a host of stars doing more autograph sessions along with a great dedicated book area that celebrated the literary world with stalls, merchandise, signings and talks. The Young Adult Literature Convention (YALC) had a big presence at LFCC too.

All in, LFCC was a big success and brought with it an amazing line-up of talent that we’ve never seen assembled before. It was all topped off by the BTTF reunion and this guaranteed that the whole weekend was unmissable and a great deal of fun to boot. Roll on November for LFCC’s next London show.