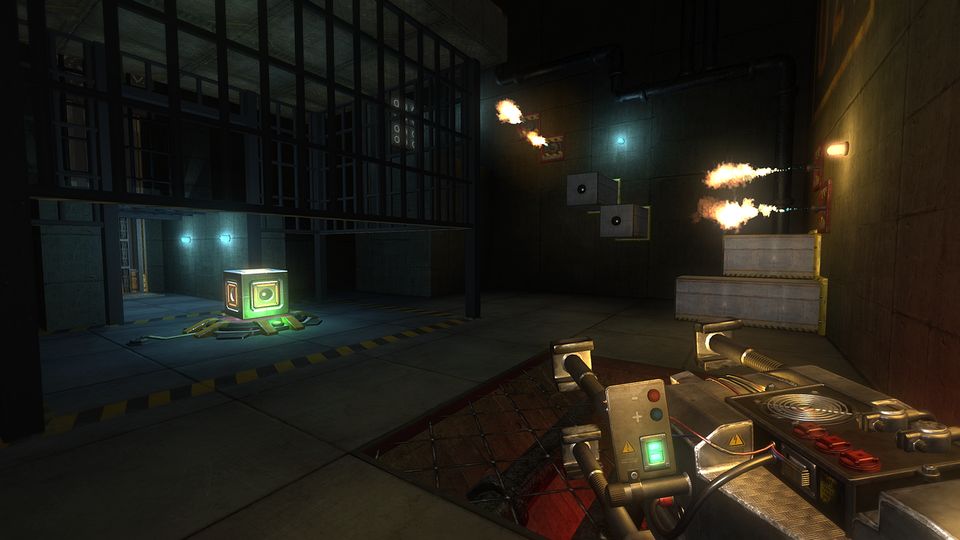 Magnetic: Cage Closed is a first person puzzle game from Swedish developers Guru Games. The game has a lot in common with titles such as Portal and Magrunner: Dark Pulse.

You take the role of Rachel Irene Randall who is also known as Bird. She’s a prisoner in Facility 7 which is a place that deathrow inmates are sent. Inside you are known as Prisoner XE-47623 and the Warden has granted you a chance at freedom.

Facility 7 is a bizarre weapons testing facility and you are given the choice of serving out your sentence or take on a series of challenges. If you are unsuccessful you’ll die but if you make it out then you are promised a new start. You begin the game in your prison cell and the facility is able to move rooms around. You spend a lot of time crawling through small connecting rooms.

Like the games that inspired Magnetic you must solve puzzles in each room in order to progress. To help you are given a prototype Magnet gun. This is capable of attracting or repelling metal objects. Also true to the laws of physics the size of the objects can also have an effect on you. So for example a small metal box will be attracted or repelled with little effect on you. However if you try to move a much larger object you can also find yourself attracted or repelled.

The Magnet gun is used to solve the majority of challenges that stand in your way so it’s important to get a good knowledge of how to use it. The rooms do a good job of teaching you new concepts by starting off simple and slowly gaining in complexity.

Each time your goal it to make it to the exit but doing so often has you sat scratching your head while you work out what is required. There’s lots of moving boxes around as well as using larger objects to repel yourself up or across gaps. Eventually traps involving spikes, fire, electricity and poisonous gas are also introduced. Rooms also feature a decent amount of first person platforming.

Guiding and taunting you as you progress is Warden William Keane who is the administrator of Facility 7. There is also the facility psychologist Karen Womberg. Most of the time it’s the Warden who is talking to you as he’s involved in the puzzle rooms. When Karen talks it’s usually because you are facing some kind of moral choice. Her rooms usually require you to surrender the Magnet gun while you make your decisions.

Your actions and choices in the various rooms can actually influence your path through the game. They also affect the final outcome so it is definitely worth playing through more than once to see different endings. Other things to keep you busy once you’re bored of the main game are time trial levels and tough challenge levels.

Magnetic: Cage Closed is a decent take on the genre and features several hours of puzzles to challenge you. The majority of the game is quite easy but the later parts of the game will have even the most seasoned puzzle gamer scratching their heads. If you enjoyed Portal or Magrunner then you’re likely to enjoy the challenges here too.