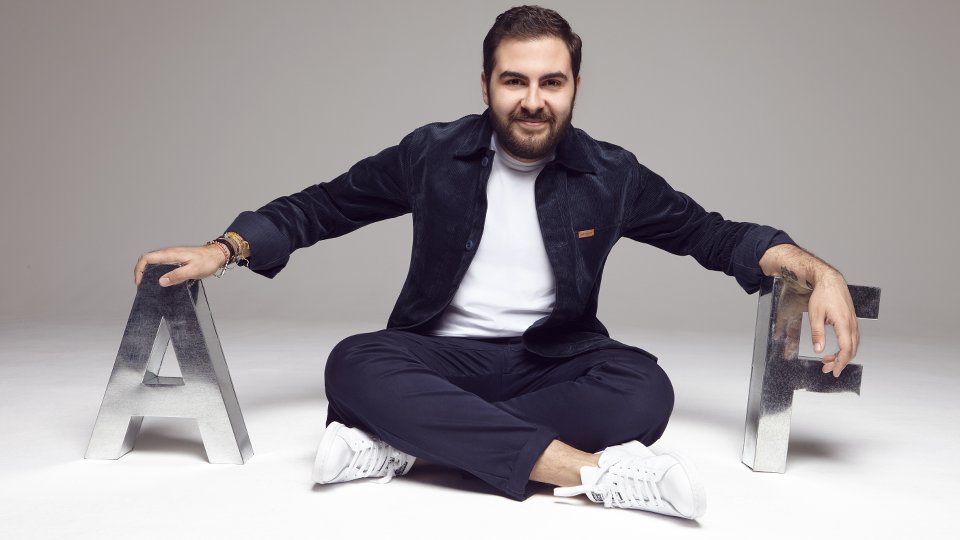 Who could forget Andrea Faustini’s audition on the X Factor? Bouncing in to the audition room wearing his Pug t-shirt and clasping a little doll of Mel B, the loveable Italian captured the hearts of the viewers with his open style, warm personality and great voice. he also made the judges smile, which is often a rarity on the show! Since leaving the show, he has been very busy recording his debut album.

Andrea’s new single, Give a Little Love is set to march up the charts, along with his debut album. Things are looking rosy for Andrea. He is gearing up to move to the UK full time, following the securing of his recording contract. Coming from Italy to live in London may be a bit of a culture change for Andrea, but it is one that he is welcoming with open arms and embracing. This means that we may get to see him more often that we already do!

Here is our interview with the loveable Andrea.

How are you settling into UK life?

I’m just loving it! It’s a little bit weird because I still go back and forth. I’ll have my own place in August so I’ll be a Londoner – I’m quite excited about it!

Does the current heat in London make you feel more at home?

Yes, definitely. I just don’t understand. I see people getting so excited, because you never have sunshine! But I’m used to it, so everyone is like ‘Yeah, go to the park!’ and I’m like ‘No, stay at home, it’s hot there!’

When you turned up for your first audition on X Factor, you had a present for Mel B – it was a little doll like her. Why is Mel B your favourite Spice Girl?

That wasn’t a present, that doll, because it is like a charm for me. I don’t really know. Mel B was my favourite, she was very strong and full of power, so I just love her.

Tell us what your thoughts were when you entered the audition room for the first time in front of the judges?

Was the X Factor experience everything you thought it would be?

Everything I thought it would be and more actually. It has been so tiring and stressful but still so amazing, so I would definitely do it again.

What’s been the highlight of your journey so far?

I think recording the album, because I’ve never really liked being in a studio, because I thought that you missed that emotional part of the singing. This time was something different, I did enjoy it. Because I actually felt the power of creating my music myself. That has to be the highlight.

How did you celebrate securing a record deal?

So, first I had dinner with my British friends – a couple of drinks and stuff. And then my sister planned a surprise party back home, it was cool.

Tell us about filming the video for Give A Little Love?

It was such an amazing experience. I did something like that before a few years ago, but it was much easier, it took me two hours. It was very easy. This was a proper video, like a serious one. And it was so, so cool. I mean it was very, very tiring, and it was the hottest day of the year, so I think they used maybe three thousand tissues – literally! But it was amazing.

But because you’re used to that heat though, does that not make you less sweaty?

Do you find it easy to perform the camera, as opposed to an audience? And are you different depending on depending whether you’re performing to people or to the camera?

I think I’m different and I sing to people better, because I just find it real. I feel like I’m telling them a story, I can see their eyes, it’s very cool. I’m learning how to sing in front of cameras. The X Factor has been a great school. Doing the first few weeks you can see I was not looking into the cameras because I was just not used to it. But if you’re on television, you have to look at the cameras because those are the people.

How do you know which cameras to look at?

Because it was red!

Tell us about your new album – the sound and feel of it, to those that are yet to hear it.

Well, it’s basically a pop album and you can easily hear gospel and R’n’B influences. I’m very, very happy about it because I think there’s a little bit of everything, and maybe there are some things that people are not expecting from me. I feel very represented by everything that’s on the album. There’s my rock side, my funky side – the Andrea that likes to sing ballads. There’s a little bit of everything, I’m very happy.

What was your favourite moment of making the album?

I think it’s when I co-wrote Give A Little Love, because I’ve written something in the last year, but I’ve never written a song properly. I play the song melodies and I just play with music and lyrics, but it was my first proper writing session with some amazing authors so it was very cool.

Do you have any personal favourite songs on the new album?

It changes all the time, but I feel like I’m very close to Give A Little Love. It is my first single ever, so I think it’s going to be a good memory for the future.

What do you think of your UK fans? What’s the nicest thing a fan has said or done?

Well, I do love them – and I’m not saying it because they have to buy my album! They’re actually very nice, and the thing I like most about them is they’re not just nice to me, they’re nice to each other. Which is so good and so cool. It’s why I want to be in touch with them. I am in touch with them on Twitter, and we created a ‘Whats app’ group. I think it’s a very immediate relationship. So, it’s cool.

What do you put in the ‘Whats app’ group?

You recently celebrated your birthday, what did you do for it?

Well, I had a massive party with my friends. I don’t have a lot of friends, we were maybe twenty people. There were some of my friends, my sister, her boyfriend (ex boyfriend!), some of her friends, my cousins. But I mean it was so great, because I don’t like to go out for my birthday. I find it very awkward going to a restaurant because you just sit there and you don’t actually have the chance to talk to people. My best friend has a house twenty minutes from Rome – we stayed there, we slept there, it was cool.

In this article:Andrea Faustini, X Factor