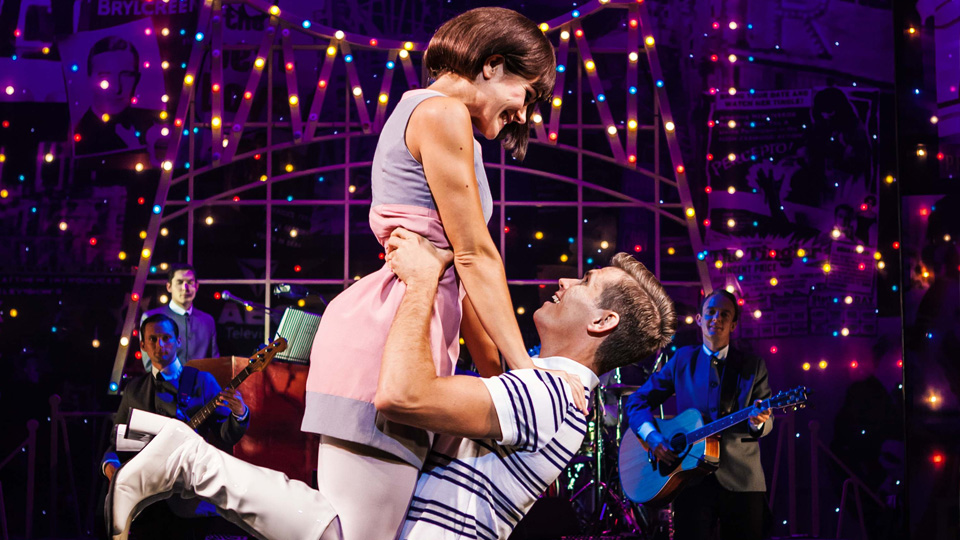 Sixties rock ‘n roll musical Dreamboats and Miniskirts arrives at Leeds Grand Theatre this week. Continuing the story from Dreamboats and Petticoats, the show follows Laura and Bobby after their brief success on the hit parade. As The Beatles cause a sensation throughout Liverpool, Bobby and The Conquests attempt to cut a record and become part of the touring action; but a bad decision sends Bobby and Laura spinning in different directions with a hit single which may break them apart entirely.

A barrage of chart classics strung together with a plot surrounding the affairs of a upcoming band, Dreamboats and Miniskirts doesn’t harbour lofty pretentious as an edgy drama. The core of the show’s value resides within its musicality and this is where it excels, offering a relentless journey through the early Sixties performed with a youthful enthusiasm and endless charisma. Appealing to those who were young in the Sixties whilst reviving a world of classic hits for a new generation, the play is a celebration of the greatest pop songs that have become ingrained the public conciousness.

Dreamboats and Miniskirts is a theatrical gig with an alluring party atmosphere, brimming with a cast which is consistently colourful. Elizabeth Carter returns to the role of Laura and demonstrates a vocal clarity which is forceful, pure and typically Sixties in its style. Alastair Hill as Norman is also exceptional, showcasing a vast range and energetic vocal next to the equally capable Alan Beaumont, both assuming the roles of crooning frontmen with stylish egotism. Alan Howell is memorably flash as outrageous record producer Tony, particularly in an acoustic cover of The House of the Rising Sun.

Over thirty musical numbers are performed live on stage by characters in the show. Featuring the sounds of The Beach Boys, Roy Orbison, The Animals and Bobby Vee, the numbers are boldly arranged and expanded for the stage with piano, electric guitar, flute and clarinet. Daniel O’Flanagan’s energetic drums provide a pounding force throughout, giving classic hits a renewed vibrancy. A bold brass accompaniment from Chloe Edwards-Wood, Laura Sillett and Joseph Hardy further flesh out the hits whilst Mike Sadler’s bass underscores the show with dexterous slides and taps. These are classic hits with a modern arrangement which are expansive and rich in tone.

An evocational flight of fancy with irresistible warmth, Dreamboats and Miniskirts is a colourful jukebox musical which is knowingly frivolous yet endlessly entertaining. It’s difficult to imagine today’s chart hits being celebrated in half a century with such warmth by such talent, and this is perhaps reason enough for younger audiences to attend the show as a way in to classic rock ‘n roll. Giddy fun and glowing with charm and cheekiness, Dreamboats and Miniskirts is an uplifting recreation of a superlative era of popular music.