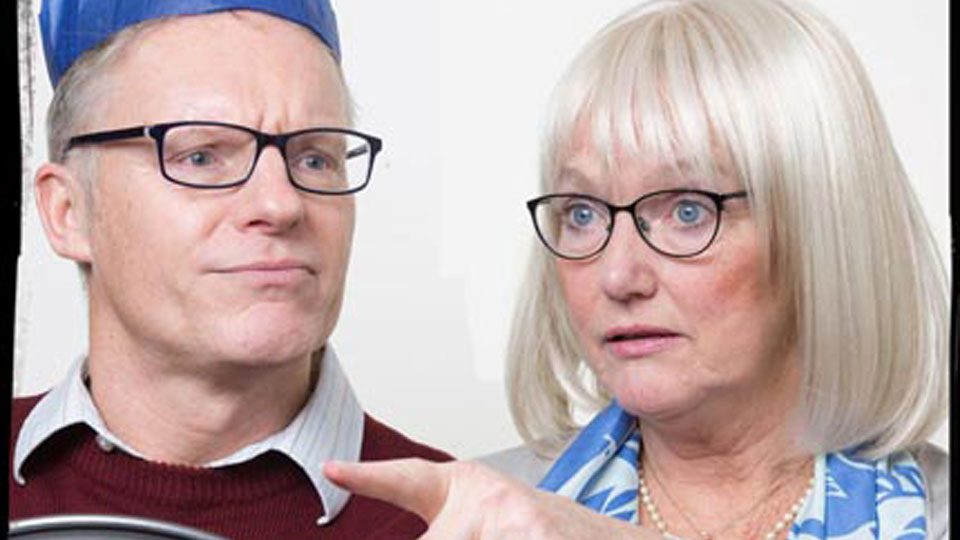 Running only until this weekend, Driving Me Round The Bend is a heart-warming Christmas treat. Yes, let your imagination block out the heat and be filled instead with this bittersweet, oh-so-British comedy that wrenches the heart with its Yuletide spirit.

George and Georgina Best have been married for…. well, a long time, and have recently become grandparents. The trouble is that they’ve never learned to communicate with each other, but despite that, their marriage has ticked along nicely enough… until now.

The story follows them on a long car journey to visit their daughter in Milton Keynes on Christmas Eve. Highly-strung and not entirely in touch with reality, Georgina (Louise Jameson), goaded by the disembodied voice of the female Satellite Navigation System, obsesses about George’s recent secretive and erratic behaviour. Surely he’s having an affair? Yet Georgina herself is keeping a secret from George: what should surely be good news and cause to celebrate is enough to unbalance her delicately-structured life, and send her OCD-addled mind spinning out of control.

Driving Me Round The Bend is a very British comedy. It’s a kind-hearted and witty look at the pressure cooker environment of being trapped in a car with a couple with marital problems, one of whom has mental health issues. Not many other nations would find the humour in this situation, but in this show, the laughs come fast and furious – unlike the sedate George’s overtly cautious driving habits. Vin Diesel he ain’t.

A large part of the appeal of the show will be the chance to see the two stars up close in the intimate and characterful environment of The Space. Louise Jameson, best-known for her many starring roles on television in cult favourites Doctor Who, The Omega Factor, Tenko and Bergerac, as well as enduringly popular soap EastEnders, has always been a fine and very adaptable actor, and she proves her mettle once again playing against type as the brittle and neurotic Georgina. From the first moment when she sits upright in her chair, obsessively cleaning and moisturising her hands, the controlling eyes and sucking-lemons mouth tell you everything you need to know about her attitude to her husband, and she delivers a superb performance throughout the show.

Nigel Fairs, who is a successful writer as well as performer, is very personable as George Best, his gentle Yorkshire accent and enduringly perky view on life making for a rewarding comic character in the tradition of George Roper (George and Mildred). We felt that perhaps, for the sake of the drama, a few more question marks could have been placed over George’s clandestine behaviour, possibly alienating him from the audience for a while, which may have made the eventual pay-off even greater. Whilst Louise Jameson runs the gamut of emotions, Fairs spans only an octave or so.

The production is simple, with little movement or props, and it could easily be adapted for audio since the majority of the action takes place within the confines of a car. It’s the dialogue and the performances that carry the show, and there’s a lot to enjoy there. However, the production is a little rough around the edges, and on the opening night, nerves got the better of Fairs, who, rattled by forgetting a prop neck brace and skipping a chunk of text, requested the second act be re-started. In Jameson he has reliable, hugely-experienced support on stage, and greater trust may have mitigated against such an unfortunate incident.

In one sense Fairs was justified – the emotional content of the piece intensifies after the break, and the pace skips up a few gears – which is why both performances have to be rock solid. Once we were back on side, the second act impressed us greatly, and the pay-off at the end is well worth the wait. Hankies at the ready, folks.

Driving Me Round The Bend is a charming if slightly uneven piece of new writing from the imaginations of the two performers, and it’s an uncut diamond piece of theatre that showcases a satisfying blend of their two talents. Don’t be surprised to see this piece return after this short run in fitter, leaner shape. We’d go along for the ride again.

In this article:Doctor Who, Driving Me Round The Bend, Louise Jameson, Nigel Fairs, The Space