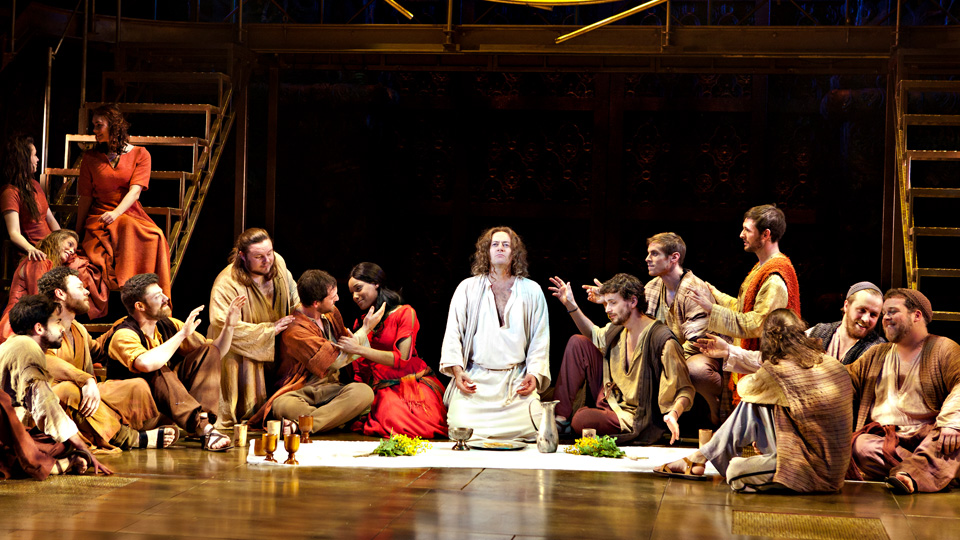 Bill Kenwright brings Jesus Christ Superstar, the musical based on the progressive rock album by Andrew Lloyd Webber and Tim Rice, to Leeds Grand Theatre this week. A production which has ignited passion and fury in equal measure, the show arrives with a guarantee of provocation.

The musical follows the final days of Jesus Christ, who is betrayed by disciple Judas Iscariot and subsequently crucified under the Roman Empire. Loosely inspired by biblical texts and developed from a sensational album, the show offers an audacious interpretation of an ancient story told through progressive symphonic rock.

Jesus Christ Superstar bequeaths a number of recognisable musical numbers. The most famous is Superstar, which became a hit in the USA and is undoubtedly the anthem for the show. Opening with a cutting electric guitar solo, the show is immediately experimental and embraces its original progressive rock origins, offering a colourful soundscape arranged with analogue synthesizers and thunderous timpani percussion. With heavily distorted guitars and a roaring and robust brass section, the score is ahead of its time, yet markedly 1970s in its rock and vocal style. In the vein of bands such as King Crimson, Led Zeppelin and Uriah Heep, it demands durability and range from its leading performers.

Glenn Carter previously played Jesus Christ in a movie adaptation and has been honing his performance in the role for the past twenty years. Perfectly pitched with a cool, calm authority and magistery, Carter has an outstanding operatic ability which is particularly flaunted during Gethsemane, a number demanding extreme vocal range. There is a unearthly feel to Carter’s Jesus; something of a restrained fireball which is constantly on the edge of ignition. A liberal rebel, Jesus is characterized within the late 1960s tree-hugging-hippy ethos, with Carter’s gently measured poise providing a vivid contrast to his aggressive passion in the musical numbers.

In addition Rachel Adedeji of X-Factor fame provides an agreeably soothing and elegant vocal performance as Mary Magdalene, offering a balanced counterpoint to Carter. Tim Rogers as Judas is intense, bursting with a passion and pain which is well-suited to the character’s guilt and torment. A stately and chilling vocal is provided by Cavin Cornwall as Caiaphas, furnishing a bass voice weighted with dread and detestation. The wildly outlandish King Herod deserves special mention, brought to a larger-than-life grotesque by the hilariously bubbly Tom Gilling.

Directed by Bob Tomson and Bill Kenwright, Jesus Christ Superstar presents a West End standard of detail within a touring production. Offering a rich depth and broad latitude of movement throughout, the artists utilise a raised platform to attain height and a grand, powerful dominance. The set is simply designed yet meticulously patterned, echoing Egyptian motifs with a richly illuminated colour pallet, evoking a dying bronze age culture. The entire show is also overseen by an omnipresent ring of twisted metal, dramatically lit and foreshadowing the infamous crown of thorns. The crucifixion sequence itself is conducted with a brutal realism, labored for several minutes with harrowing sound effects and a performance from Carter which is relentlessly tragic. Full of spectacle and scope, this is a show which is as visual and visceral as it is musically progressive.

Jesus Christ Superstar has been presented in both historical and contemporary settings during its numerous runs. Whilst this version is mostly routed in the iron age, it offers a number of quirky anachronisms, such as perspex riot shields, camera flash guns and nipple tassels. Not particularly distracting in itself, it’s a bizarre design choice which is extended into Judas Iscariot’s musical number Superstar, bejeweling the dead disciple in sequins and white skinny jeans. Echoing the disparate feel of Joseph and the Amazing Technicolor Dreamcoat, yet nowhere near as bonkers, it is something of an unexpected tonal shift in a piece which is otherwise driving towards darkness and death.

Samuel Paynehttp://samuelpayne.weebly.com
Reviewer of Theatre in the North, including releases of classic film and television.
Previous article
Andrew Dunn to star in The Railway Children
Next article
Dreamboats and Miniskirts heads to Leeds