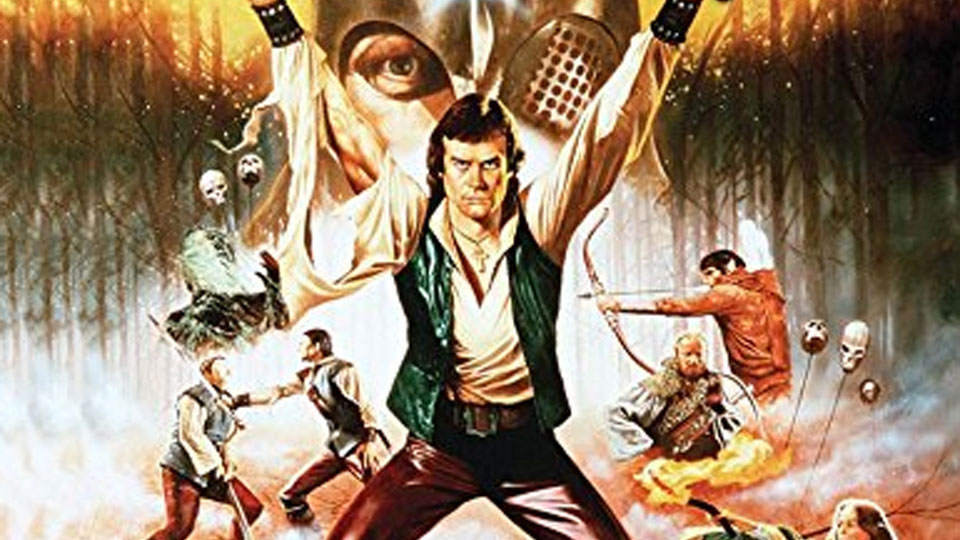 This 1980 British fantasy movie has acquired cult favourite status. It stars John Terry (Dalton’s Bond’s original Felix Leiter in The Living Daylights, and more recently Jack’s dad in Lost) as a medieval knight whose dying father gifts him a magical sword. All is not well in the kingdom though, as Hawk’s brother Voltan (Jack Palance) is on the rampage and has taken an Abbess (Annette Crosbie) hostage for the ransom of gold. Hawk must assemble a band of warriors to overcome Voltan, free the Abbess, and save the kingdom from tyranny.

The plot is all rather hokey, derivative of Robin Hood and his Merry Men and thousands of other tales from myth and fantasy ever since. If you’re hoping for a few twists and turns or unexpected surprises to offer something original, you’ll be disappointed. Hawk the Slayer is ploddingly, drearily straight-forward, both in its storytelling and in its morality, which is black and white with no shades in between. If you like the fantasy genre, and enjoy simple fairytales of good versus bad, then Hawk the Slayer may hold a few charms, and certainly established fans will relish the chance to see the film in high definition.

Judged as a piece of cinema, though, Hawk the Slayer is execrable. There are one or two saving graces that make it worth the effort, most pertinently that it’s a great movie for spotting British character actors. Harry Andrews pops up as a monk, and Bernard Bresslaw (the big guy in the Carry On movies) plays a leading part as one of Hawk’s motley gang. Roy Kinnear has a cameo and overplays it wonderfully, whilst Maurice Colbourne (Gangsters, Doctor Who) plays his usual threatening hard guy. Annette Crosbie (One Foot in the Grave), Patricia Quinn (The Rocky Horror Picture Show) and the brilliant Cheryl Campbell manage to create sympathetic characters out of the awful dialogue they’re given.

Then there’s Jack Palance. It’s shocking to see an Oscar-winning actor (for City Slickers) offer up such inept and shouty pantomime villainy as Voltan. It’s easily a contender for one of the worst performances ever committed to celluloid. Coupled with John Terry’s po-faced and lifeless hero, the two stars leave it impossible for anyone over the age of six to find any level of credibility in the world of the story. The unfolding of the plot is dull and repetitive, with Hawk turning up to rescue one of his select band of warriors from peril over and over again. The glee with which the heroes kill off anyone who stands in their way raises certain questions about just how moral their crusade really is. Terry Marcel has virtually nothing in his director’s armoury, resorting to repeated close-up shots of Hawk’s eyes as he stands off against various villains. He also leaves no stone unturned in reaching for every conceivable cliché, and by the tenth shot of John Terry riding on horseback through a shallow stream in slow motion, amusement has given way to ennui.

There are a few well-handled visual effects, and less-successful painted backdrops. However, the silly string-attack and the indoor polystyrene blizzard during the climactic battle leave the film beyond even parody. This is one for the devotees.

In terms of the restoration, Hawk the Slayer looks good in high-definition, though there are a few scenes in low lighting that have unrestored distortion on the picture. Fans of the movie will enjoy some thoughtful extras, including contemporary interviews with cast and crew, including John Terry and Jack Palance. There’s also behind-the-scenes footage of the filming of Roy Kinnear’s scene, which happens to be one of the best in the whole movie, largely thanks to Kinnear.

Hawk the Slayer is released as part of Network’s The British Film Collection.