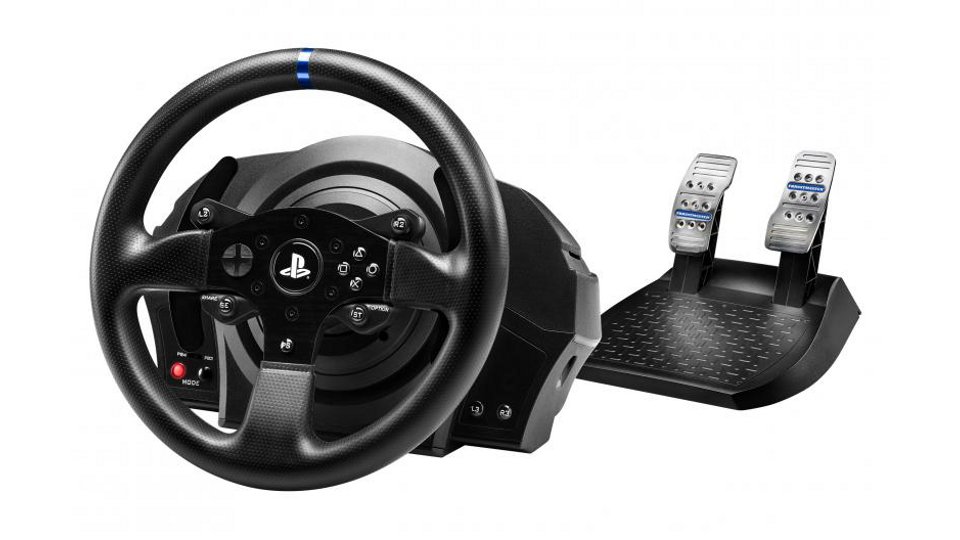 I’ve been playing racing games for over 30 years which means I’ve also played them on many different platforms. I’ve played on computer keyboards, all manner of joysticks and of course the various console gamepads. While it’s possible to master these control methods with practice none of them really emulate the actual feel of driving.

Until we hit the 32-bit era of the mid-nineties with the PlayStation the only place you would get chance to play a racing game with an actual steering wheel was in the arcades. In recent years racing wheels for home consoles have really improved a lot but they do cost a lot of money.

Players who owned a racing wheel for PS3 or Xbox 360 found themselves disappointed when the expensive racing setup they had bought wasn’t compatible with the new PS4 and Xbox One consoles.

I’ve spent the last few weeks with the Thrustmaster T300 RS force feedback racing wheel. This is a racing wheel that is designed for both PS3 and PS4. It retails at a recommended price of £299.99 which is the same price as a PS4 or Xbox One. If you shop around you can pick one up for around £250 but it’s still a huge investment.

The T300 RS comes in a huge box and once unpacked you can tell that this is some quality kit. It’s big, heavy and looks really impressive. The kit comes with three main parts, the steering wheel, the base and the footpedals.

Setting up the kit is simple and just requires a wire from the pedals to the base, a wire to your PS4/PS3 and a power cable. The steering wheel also needs to be screwed onto the base which takes a few seconds once you work out how to do it.

The base is large and heavy and measures approximately 30cm x 20cm x 16cm. The most difficult part of setup is attaching it to your desk. This is done with the included clamp and requires you turn it until it’s tight on your desk. For it to work well you really need a desk without a bar running across the front. If you do then you need to pad the clamp with some wood or books so that it attaches firmly. If you don’t attach the base properly or ignore the clamp completely then the wheel is effectively unusable.

Once attached to your desk, plugged into your console and powered on the wheel attempts to scare you to death by running some sort of automatic calibration. I chose to plug mine in before attaching to the desk and it chased me across the room.

The PS4 automatically recognises the T300 as a controller and the wheel features all the buttons that you need to navigate the PS Home screen and launch your game. There aren’t too many choices of racing games for PS4 players at the moment but DriveClub and Project Cars are both worthy titles. Most of our testing has been done using the wonderful Project Cars.

The default wheel with the T300 has a textured rubber finish with a brushed metal centre. It feels quite nice in your hands but not as nice as the leather add-on wheels that are available (see below). Behind the wheel are two metal paddles that are designed for quickly changing up and down gears.

The pedal set features a brake and accelerator. These have metal plates on the front and they sit on a textured plastic base. As they are just attached by a wire you can easily move them into a position that best suits you. Also the height of the pedals is adjustable too if desired.

The wheel base features a brushless motor, contactless magnetic sensor and dual-belt system. What this means is the wheel is smooth to use, near silent and incredibly precise. It’s also built to last so should be good for the life of your console.

Depending on what game you are playing and also your preference you may need to tweak the setup of the T300. I found that Project Cars was far more playable that a DualShock gamepad on the default settings. However after spending time tweaking the setup it was even better.

When racing the force feedback is sensational and allows you to properly feel how the car is performing. You can feel the forces on the car and it makes it a lot easier to respond. I’m usually pretty good at racing games with a gamepad but after playing with the T300 I think I’ll find it hard to go back to one.

I also had the opportunity to try out Thrustmaster’s leather 28 GT wheel add-on. If you fancy a more premium wheel, it costs an additional £140, then this is definitely the way to go. Other wheels are also available such as those designed around the Ferrari 458 or Ferrari F1 wheels.

At first the GT wheel seems very similar to the default wheel until you play a game with it. It has a lovely stitched leather finish which just feels a lot nicer in your hands. It also appears to transfer the force feedback forces better to your arms to emulate the real thing even more closely.

The buttons are in different positions to the default wheel which will suit some players better. They opt for colours rather than corresponding console markings too. Finally there is a 3-position rotary switch.

The Thrustmaster T300 RS is a truly wonderful piece of kit. For driving games there really is no better way to play than with a racing wheel. As easy as it is to recommend it’s only really a viable option for die-hard racing fans as the cost is just too hard to justify for the average gamer. However if you’ve got the cash to splash and want to take your skills to the next level in driving games then seriously consider picking one of these setups up.