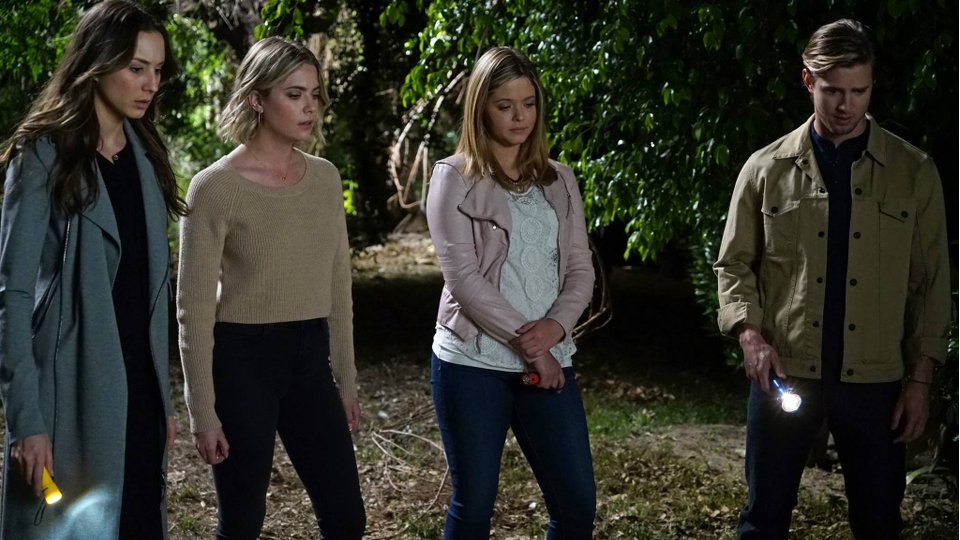 More answers about Charles were delivered in the latest episode of Pretty Little Liars but not without plenty more questions were posed.

If you haven’t seen the latest episode of Pretty Little Liars and want to avoid spoilers we suggest you stop reading now. If you have seen it and want to relive all of the action then keep reading.

The truth about Charles

The episode kicked off with Alison (Sasha Pieterse) telling her friends what her father told her and Jason (Drew Van Acker) about Charles. According to Kenneth (Jim Abele), Charles wasn’t Jason’s twin and was in fact 15 months older than him. At a young age Charles was very disturbed and the DiLaurentis family made the heartbreaking decision to put Charles in Radley before moving to Rosewood to start afresh. Whilst in Radley Charles committed suicide by taking an overdose and Jessica (Andrea Parker) had Charles’ body cremated and scattered his ashes over a lake.

As you can imagine the girls weren’t quick to believe every word that Kenneth told Alison with Hanna (Ashley Benson) remaining adamant that Charles was still alive. The girls surmised that if Charles wasn’t alive, their tormentor had to be someone who knew him and felt a strong enough affinity with him to believe they actually were him.

All roads lead to Radley

With the bombshell that Charles was a Radley patient, Hanna suggested that the group pay a visit to the institution only to be reminded that it was closed down. Spencer (Troian Bellisario) did some digging and discovered that all of the files from Radley that involved past patients had been sent to a warehouse to be destroyed. Rounding up Aria (Lucy Hale), Emily (Shay Mitchell) and Hanna, Spencer went with her friends to the warehouse where they crept in through an open door. As they searched through the boxes of files, Emily and Hanna shared a brief conversation about whether or not their friendship was still intact after their experience but they were cut short when Aria found the Radley files.

In one of the boxes she found Charles’ file but it only had information on him from ages 13-16. They discovered he was being medicated for severe depression and the visitor’s log showed that he only had two visitors, Jessica and Charles’ aunt Carol. The girls were interrupted so they took the file and made their way out of the warehouse to be confronted by a furious Caleb (Tyler Blackburn).

The girls shared Charles’ file with Alison who spoke with Jason about it. He was struggling to get past the fact that his parents led him to believe his own brother was an imaginary friend but at the mention of Carol’s name he recalled going to her house to hide out following his infamous elevator run-in with A the previous year. When he arrived at the house he was surprised to be greeted by his mother who quickly ushered him away but not before he heard mysterious banging in the house leading him to believe there was someone already living in the old house.

Jason, Ali, Spencer and Hanna went on a road trip to Carol’s house to explore and see if they could find any evidence that Charles was still alive and living there. They searched the house and found nothing but a search of the garden uncovered a tombstone with Charles’ name on it. Hanna was sure that the grave had been faked by A and started to dig it up much to Ali’s distress. Jason stopped her by pointing out that the growth of weeds around the headstone indicated it had been there for a long time so maybe Charles isn’t alive after all? Also it highlighted that Jessica had lied to Kenneth about what happened to Charles’ body and it seems he wasn’t cremated after all.

Spencer’s descent into an addiction relapse continued as she was plagued by memories of her time in the bunker. On one occasion she woke up in her room covered in and surrounded by blood with no idea of what actually happened. Worried that she may have hurt someone whilst being held captive by Charles, Spencer tried to find a way to block out the memories so she could get on with her life. Her first effort was to try and find the pills Aria had thrown out by going through her friend’s trash. When she didn’t find what she was looking for, Spencer appealed to Ezra’s (Ian Harding) new chef Sabrina (Lulu Brud) who used pot to help control her migraines. Sabrina offered to make Spencer some pot cookies as a one-off and despite Ezra’s warning that it’s not a long-term solution, Spencer went home with them anyway.

Spencer also spoke to Hanna whilst the girls were at Carol’s and told her about her memories. Hanna assured her that it was probably one of Charles’ mind games and asked her who she could have possibly hurt as all of the girls got out of the bunker alive.

Aria continued to explore her renewed interest in photography this week but found that her father Byron (Chad Lowe) was becoming a little bit too over protective. When he discovered she’d lied to him about going to the studio to work on her photos, he insisted on accompanying her to Hollis the next day and taking her home again. Aria decided to placate her father and told the girls she couldn’t go to Carol’s house with them.

Whilst in the dark room developing her pictures, Aria was alarmed to discover a bottle of hair dye with a note from A on it claiming she was his ‘doll’. The discovery brought back memories of the bunker where Charles forced her to dye her hair with a pink streak and threatened to cut all of her hair off if she didn’t. He gave her a fashionable bob as an incentive! Aria freaked out in the dark room and hammered on the door for help when she couldn’t open it. Fellow student Clark (Titus Makin Jr) let her out and told her someone had put a wedge in the door to stop her from being able to get out.

Aria spent some time with her new friend looking at his photos and he encouraged her to display hers. Clark gave her one of his photos to take home and when Aria arrived back at her house, she broke down and told her father about the room she was kept in during her time in the bunker.

Hanna and Caleb hit the rocks this week as Hanna struggled with her boyfriend’s attempts to keep tabs on her. First he stayed over but instead of sleeping he stared out of the window obsessing over the police protection. Later on he revealed he’d put a tracking device on her car as he wanted to keep her safe and knew she was lying to him. Hanna was worried that by telling Caleb what she was up to, she would put him in further danger with A so she made the decision to ask him for some space.

Samily or is it Emara?

Sara (Dre Davis) and Emily grew ever closer and it looks like a romance may be on the cards (we’re pretty sure this is going to be a terrible idea!). Sara refused to see Dr. Sullivan (Annabeth Gish) but Emily was forced to go by her mother Pam (Nia Peeples). Sara continued to act strangely alarming Pam who found her on the roof staring at the sunset. After overhearing Pam expressing her concerns to Emily, Sara ran away in the night but Emily tracked her down discovering Sara had tried to return home but her mother was still disinterested in her. Emily took Sara out in the evening for a late night swim where the girls competed against each other by holding their breath underwater. Sara confided that no one had looked out for like Emily has… Hands up who thinks Sara is dodgy and that Emily should stay well away from her?

After returning home Ali found her father in the living room and he had one more revelation for her. The reason Charles was committed to Radley is because he tried to murder Ali when she was a baby by attempting to drown her in the bath. Ali pleaded with her father to tell her no more asking that he let Charles ‘rest in peace’.

Well Charles or A (whoever the hell it is) was shown to be still at large and he’s monitoring all of the girls with tracking devices. What’s his next move?

Pretty Little Liars continues at 8/7c Tuesday on ABC Family in the US and Wednesday on Netflix in the UK. Watch the promo for the next episode She’s No Angel below: