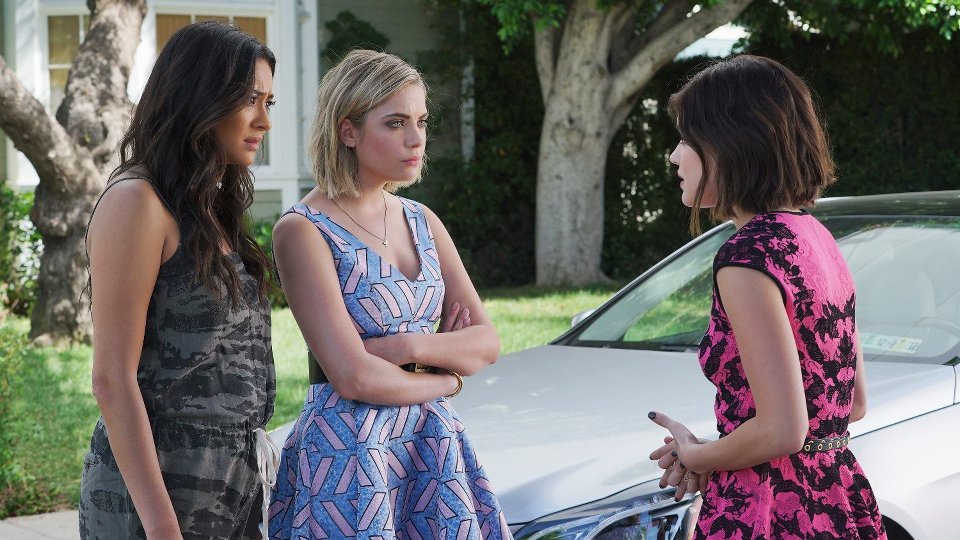 We’re so close to the answers now on Pretty Little Liars that we’re already counting down the days to next week’s episode to find out what Ali (Sasha Pieterse) and Jason (Drew Van Acker) found out from Kenneth (Jim Abele) in that final scene.

Back to school (or not)

The day finally arrived when it was time for Aria (Lucy Hale), Spencer (Troian Bellisario), Hanna (Ashley Benson) and Emily (Shay Mitchell) to go back to school. The four girls promised one another that they would show a united front but there’s only Hanna who actually made it into school. Aria avoided school following a conversation with Ezra (Ian Harding) where she told him she wasn’t ready, Spencer spent the day playing sleuth and Emily used Sara (Dre Davis) as her excuse for staying home.

Hanna on the other hand bumped into Dr. Sullivan (Annabeth Gish) and decided that maybe it was time to talk to her about things. She promised to round up the other girls and take them to the good doctor’s office so they could finally talk to one another about what happened in Charles’ bunker.

Emily decided she had to look after Sara rather than go to school. She roped in her mother Pam (Nia Peeples) to keep them company for the day and went through Emily’s old clothes to give Sara a new wardrobe. Sara revealed that her mother had thrown out all of her clothes because she ‘needed the space’ and Pam told her it was an opportunity to start from scratch. Emily equipped Sara with her burner phone and put her number in it so she could call her any time she needed to.

Emily left the house to meet the other girls for their session with Dr. Sullivan, which never happened as they received a call from A/Charles whilst in the waiting room. It was a video call showing him holding a knife over a sleeping Sara and telling them that if they didn’t leave the office immeditately he would kill her. The girls rushed to Emily’s and found Sara alive and well.

Later in the episode Sara was treated to a pixie haircut courtesy of Pam (who knew she was so nifty with a pair of scissors?) and scared Emily by creepily sitting in the dark in her bedroom.

The many lies of Kenneth DiLaurentis

Spencer and Alison started the episode off at each other’s throats when the former tried to push the latter into confronting her father about Charles. Ali swore that her dad hadn’t lied, even though she’d found the photo album with pictures missing. Spencer told Ali that she would speak to Jason about it causing an argument in which Ali asked her to leave.

Well Spencer completely ignored Ali’s pleas and went straight to Jason to ask him about Charles. At first he denied all knowledge of knowing anyone in the family called Charles but Spencer sensed he was hiding something. She challenged him and he told her that Charles was actually Charlie his imaginary friend and that his father had put a stop to him when he was a little boy.

Spencer shared the news with the other girls and they took the information to Ali. This led to them searching the DiLaurentis house again for clues and Aria found a picture of Jessica (Andrea Parker) with two little boys. She showed the photo to the other girls and they recognised them from the video in the bunker. Ali promised to tackle her father about it on her own and the girls left the DiLaurentis house.

Aria spent time at the Rear Window Brew with Ezra trying to put the pieces together about Andrew. She sifted through some old photographs of her short-term boyfriend and Ezra agreed to try and help her make sense of it all. Ezra made a phonecall to dig some dirt up on Andrew and find out more about him but all he found out is that he was adopted and his date and place of birth was sealed in his adoption records. Does that mean he could actually be Charles DiLaurentis?

Andrew Campbell (Brandon W. Jones) was released from Rosewood prison in this week’s episode after the case against him was dropped. Pam broke the news to the girls and they realised that he couldn’t have been the person who sent them the video threatening Sara’s life. It was also revealed that Andrew had an alibi for the night that Mona (Janel Parrish) was attacked and that he was in hospital having his appendix out the weekend Sara was kidnapped.

As they walked home through Rosewood, the girls saw Andrew leaving the police station. Aria tried to speak to him but he was too angry with her, and the other girls. He revealed that he was trying to find them when the police thought he was on the run and he wanted to be the hero. Andrew also told them that he wanted to ignore the rumours that surround the girls and he thought he was genuinely helping them.

Following their run in with Andrew, the girls finally faced up to some of what happened in the bunker. Hanna kicked things off by talking about the switches she was forced to press to torture the other girls. Aria stepped forward saying she played the same game but was never tortured leading Emily and Spencer to admit they too played the same games but never suffered either. The four quickly realised that Charles was pushing them to their limits to see what it would take for them to hurt one another and that he’d tricked them.

Alison showed the picture that Aria found to Jason and the two siblings banded together to tackle their father. When he arrived home they demanded answers, which didn’t sit well with Kenneth and he got angry at Jason for all the things he’s done to the family (what does that mean?). They showed him the photo and he sat down and by the looks of it he told them the truth. We couldn’t hear what he said as the camera panned out of the window to show A watching the DiLaurentis family. Ali and Jason’s reactions though suggested their father had told them something pretty shocking.

Pretty Little Liars continues at 8/7c Tuesday on ABC Family in the US and Wednesday on Netflix in the UK. Preview the next episode, Don’t Look Now, below: