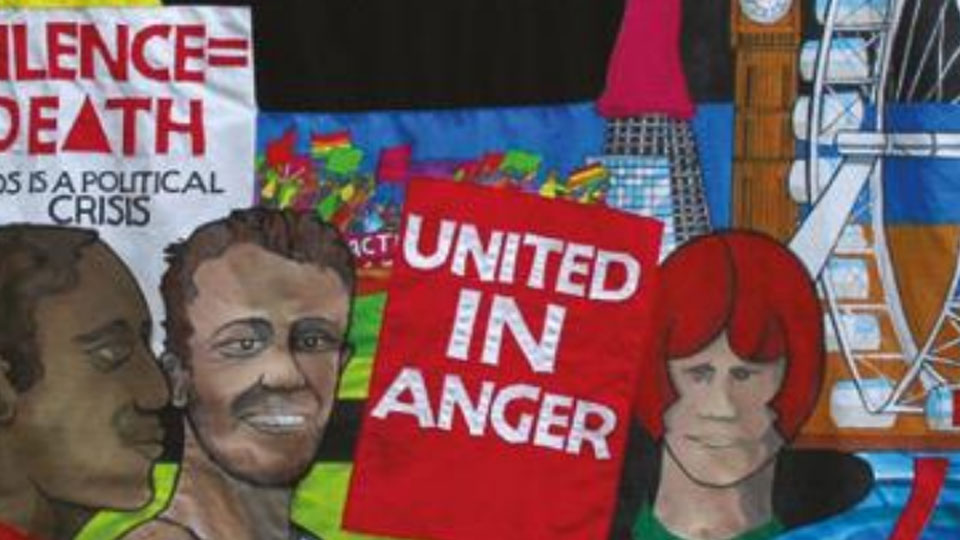 Trafalgar Square is well-known as an international platform for resistance, art and politics. ACT UP London invites HIV+ and HIV- migrants, their friends, family and allies to attend a joyful protest against Nigel Farage’s isolationist, HIV-phobic rhetoric and Tory restrictions on healthcare access which will impact on HIV+ migrants. This peaceful photocall pays tribute to the founders of the gay liberation movement and HIV activism.

Flanked by an ACT UP queen’s guard, members of the public are invited to dress up or just come along to take a selfie in front of the new ACT UP banner designed by Ed Hall. Participants are encouraged to publish their photos on social media to help raise awareness of this injustice.

The ACT UP banner will be situated in front of Nelson’s Column facing the National Gallery.

During the photo call, HIV+ and HIV- migrants and leading figures from within the gay liberation movement and HIV activism will speak for five minutes a time.

ACT UP London (AIDS Coalition to Unleash Power) is a revitalised chapter of the non-partisan international movement founded in 1987. They are united in anger and committed to direct action to end the HIV/AIDS pandemic.

Dan Glass spokesperson for ACT UP London, activist, performer, and writer for The Glass is Half Full (and who himself has led two successful actions drawing attention to the injustices of Nigel Farage starting with a protest outside UKIP’s South London offices on World AIDS Day in 2014 and the recent UKIP Cabaret) says: “Farage spread lies throughout the General Election to scare people about HIV+ migrants flooding the health service. Playing on similar fears, the Tories have put in place discriminatory health surcharges for migrants that turn NHS staff into border agents and scare vulnerable people from seeking medical attention. Together, UKIP and the Conservatives are undermining British values, dismantling the NHS and contributing to rising HIV infection rates. It’s an honour to be on Trafalgar Square as part of the new generation of ACT UP. Together we stand on the shoulder of giants, paying tribute to freedom pioneers such as the Gay Liberation Front and LGBT and HIV and migrant rights groups everywhere.”

Ed Hall is Britain’s leading designer of marching banners for trade unions and other campaign groups and is also widely known for his ongoing collaboration with Turner Prize winning artist Jeremy Deller. Ed says: “I was so pleased to make the banner for ACT UP, meet members of ACT UP and be involved in its important work for justice and equality.”

Advertisement. Scroll to continue reading.
In this article:Andrew Keates, As Is