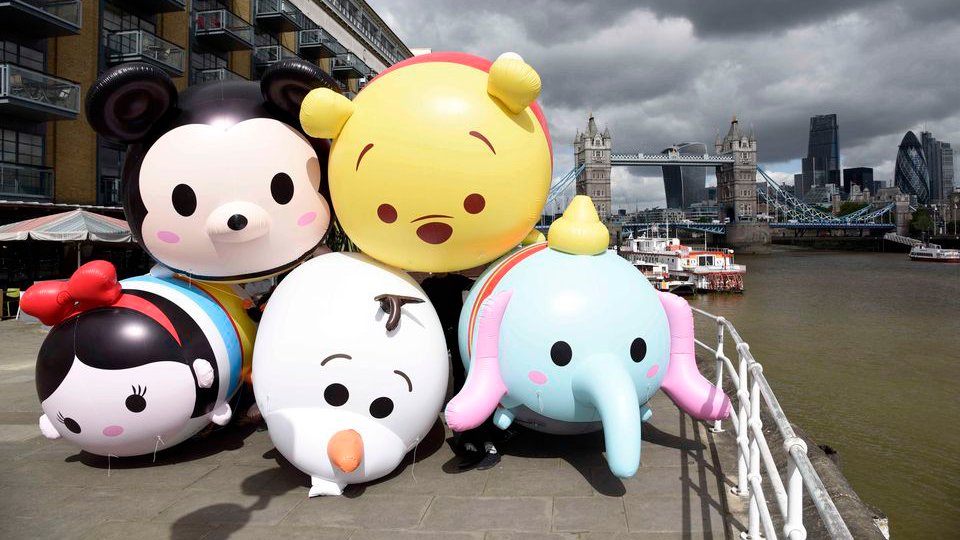 Copyright STEWART WILLIAMS 07956 568150 DISNEY ‘TSUM TSUM’ TOY CRAZE JUST GOT BIGGER Giant Disney characters in the shape of "TSUM TSUMS ", the latest collectible toy craze to hit the UK from Japan, journeyed through London on their way to Disney Store on Oxford Street. (FREE TO USE)

Giant Disney characters in the shape of “Tsum Tsums” (#DisneyTsumTsum), the latest collectible toy craze to hit the UK from Japan, journeyed through London against a skyline of iconic landmarks including Tower Bridge, St Paul’s Cathedral and the London Eye on their way to their final destination, the Disney Store on Oxford Street.

The largest Tsum Tsums ever to be seen in the UK, captured the attention of passersby who were delighted to see their favourite Disney characters, including Mickey Mouse and Minnie Mouse, Winnie the Pooh, Dumbo, Donald Duck, Snow White, Elsa and Olaf, make their way through London.

The collectible Tsum Tsum’s have been an instant hit with the British public and are fast becoming the next must have. A remarkable number have already sold at Disney Store in the UK since their launch, with enough to stack 670 times higher than Trafalgar Square’s Nelson’s Column and 260 times higher than the London Eye. The fast paced app is also entertaining Disney and gaming fans alike through the App Store.

In the Disney Tsum Tsum app, available for iOS and Android devices, players connect and pop as many of the Disney Tsum Tsum characters as they can in one minute. The more Tsums eliminated within each level, the higher the score. As they progress through the game, players collect Disney and Disney•Pixar Tsums Tsums, like Mickey Mouse, Minnie Mouse, Stitch and Buzz Lightyear. Each collectable character can be levelled up over time and has a special ability that provides in-game help. By connecting “Disney Tsum Tsum” to a LINE messenger app account, adult players enjoy social features in-game, like competing for high scores on leaderboards and gifting, with their friends.

Followed by a collection of soft toys, they are designed to be stacked big and high, and are available in small, medium and large sizes. With over 34 Disney Tsum Tsums available, they are generating enormous excitement amongst Disney fans by letting them build a collection of their most adored characters.

In honour of Disney Tsum Tsum, the first Tuesday of each month has been renamed ‘Tsum Tsum Tuesday’ at Disney Store and sees additional new characters released, with the Inside Out collection being the most recent to join this June.

Disney Tsum Tsums are available at both Disney Stores and Clintons across the UK.

In this article:Disney, Tsum Tsum