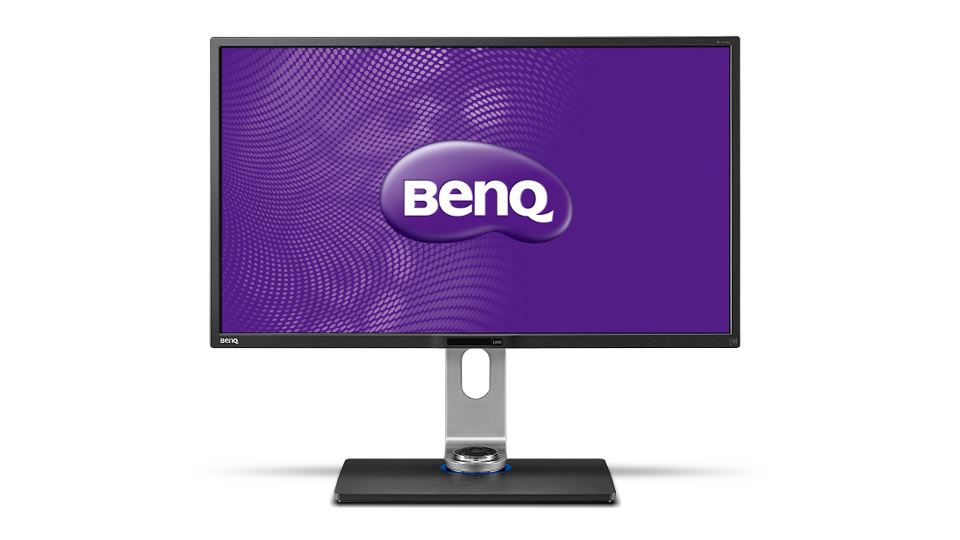 We’ve tested a few BenQ monitors recently from their range aimed at gaming and been very impressed. The BenQ BL3201PT targets professional designers so if you work in areas such as CAD/CAM, design, video or photography then this might just be the monitor for you. We’ve spent a couple of weeks testing the monitor out with a range of activities.

The BenQ BL3201PT is huge and impressive to look at. It features a 32-inch display that connects to a sturdy metal stand with a plastic base that features a brushed aluminium aesthetic. While connected to the stand you can easily adjust the height of the monitor as well as tilt and rotate it to your desired position. The base is fairly small too so it doesn’t take up a lot of room on your desk.

The display isn’t just massive compared to most other screens, it’s also capable of Ultra HD (UHD) 4K resolution. A normal HD screen will run at a resolution of 1920×1080 but the BL3201PT runs at 3840×2160. Having four times the pixels available is like having four monitors in one.

Normal users may find that there’s just too much space. If all you really use your PC for is a bit of web browsing then you soon realise this screen is too big for you. Despite more and more websites featuring responsive design there aren’t many that work great on such a high resolution. If you try and run something like Facebook in fullscreen it looks tiny and lost in the middle of the screen.

The high resolution brings many benefits if you’re someone who needs a lot of screen space in order to do your work. If you’re a designer or programmer who is used to using software with complex graphical user interfaces a single monitor is often too small. You might find things too cramped together to work effectively. In recent years more programs have supported multiple displays but then you need to split the interfaces across screens and spend forever looking around.

The BL3201PT has plenty of room to have everything you need comfortably on one screen. So while the price may seem high you could find that you only need one monitor instead of two or three. Which may infact be a cheaper option. Other things that help here are the Picture-in-Picture and Picture-by-Picture features.

The other thing the monitor is great for is watching 4K video content. However it’s currently hard to come by and hasn’t really taken off yet. There are 4K samples and trailers available on the internet and they look stunning when viewed on the monitor. It’s a similar experience to watching HD content over standard definition for the first time. The amount of detail is simply staggering and it’s a great way to show the monitor off.

If you’re a keen gamer then the BL3201PT isn’t the best choice compared to screens aimed at gaming but it is capable. One benefit is that it will allow you to run games up to 4K resolution if they support it. While many games will run at the higher resolution not many are actually designed to do so which means there is little benefit. It’s worth pointing out that you need a high-end graphics card to really get the most out of games at 4k resolution. This is because the graphics require a lot more GPU power. Your PC might run the latest games at 60fps but when you run at 4k resolution you can expect a big performance drop even on the top graphics cards.

The bezel around the display houses a light sensor in the bottom middle. In the bottom right is a power button and next to this is a row of five LEDs. These sense when your fingers are close and light up which is cool. Touching them controls the On-Screen Display allowing you to navigate the many menus. There’s also an optional remote to control the menu’s which docks in the middle of the base.

If you have a need for a 4K monitor then the BenQ BL3201PT is a fantastic choice at a nice price. Users who work on software that requires a lot of screen space will be delighted by the extra detail. However there is currently little reason to recommend the monitor to normal users until there is a lot more 4K video content or games available that support it.