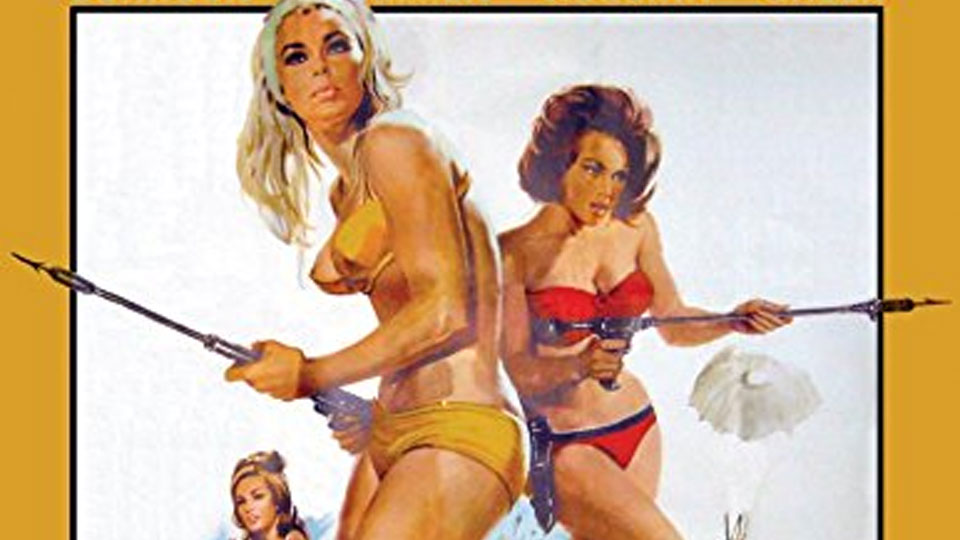 The Swinging Sixties was a great time for espionage thrillers, and, a few years before the arched eyebrows of Roger Moore added a tongue-in-cheek humour to the James Bond franchise, Deadlier Than The Male from the Rank Organisation trailblazed the way. Using the literary spy Hugh ‘Bulldog’ Drummond (popular, but hardly in the same league as Ian Fleming’s vodka martini-supping superspy), the British movie follows his adventures as he comes up against a master criminal who employs sexy young women to carry out a string of deadly attacks.

The characterisation of Drummond here sets him firmly in the 1960s, updating him from his 1930s origins. Into the role steps Richard Johnson (who sadly died this very week), who is solid enough, if never as smooth or captivating as the part perhaps requires. Oddly, he’s far more charming and charismatic as himself in an excellent series of interviews that feature on the extras than he ever manages to be in the finished product. There’s an array of great British character actors who add much screen presence and curiosity value to the film. Leonard Rossiter (Rising Damp) gives a superb turn playing to his strengths as a seedy and beady-eyed member of the board of an oil company thrown into disarray by the assassination of the chief executive. Nigel Green (The Ipcress File) and Laurence Naismith (The Persuaders!) are amongst the familiar faces, along with Greek actor George Pastell, who popped up in plenty of villainous parts at the time.

Elke Sommer, famous since starring opposite Peter Sellers in A Shot In The Dark (and who would do so again in The Prisoner of Zenda) is suitably seductive as the ostensible leader of the gang of femmes fatales. Sylva Koscina (who had played opposite Dirk Bogarde in Hot Enough For June) and Suzanna Leigh lend her full-bosomed support.

Deadlier Than The Male gets off to a terrific start with a pre-titles sequence that is clever, intriguing and sexy, whilst also establishing the tone and subject matter of the film. An indifferent, sub-John Barry title song rendered by The Walker Brothers signals the issue that nags away throughout the duration of the movie, which is that it’s a lot more frivolous than the Bond movies of the same era, but nowhere near as good or as memorable; and whilst it makes efforts to do its own thing, comparisons are inevitable. The major twist is easily guessed at, and whilst a set-piece around a giant chess board at the climax of the movie is memorable, it comes after a fairly run-of-the-mill story has unfolded.

The Italian countryside provides beautiful locations, and the colours in the print are rich and vibrant, and the movie now looks excellent in high-definition. Deadlier Than The Male makes for solid and fun entertainment; but it’s not quite as funny and quirky enough as it needed to be to offer a compelling pastiche of Bond; nor stylish enough to compete.

Extras include interviews with the principle cast, featuring Richard Johnson, Elke Sommer and Nigel Green talking about their experience of making the movie. Also included is a theatrical trailer and image gallery.

Deadlier Than The Male is released as part of Network’s The British Film collection.