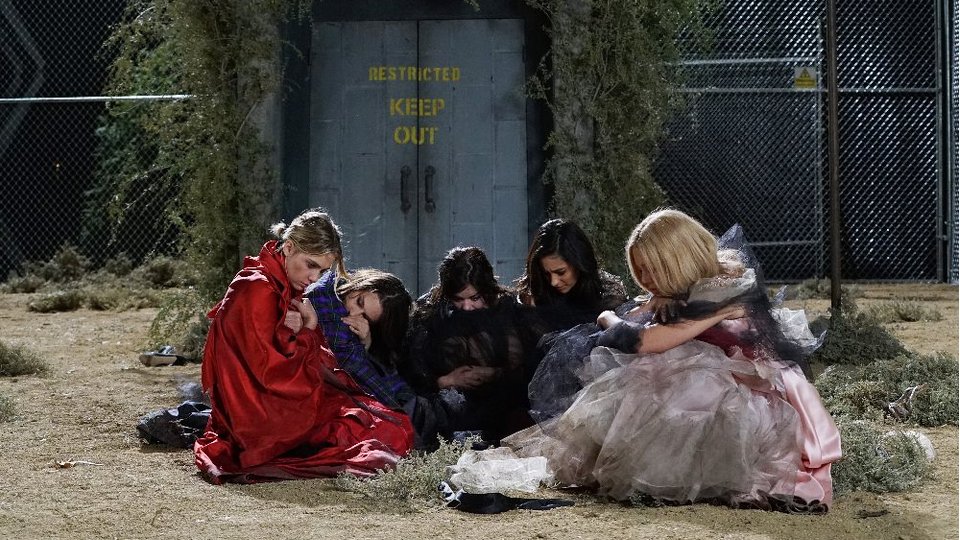 Pretty Little Liars has kicked off its sixth season and it looks like it will follow through on its #SeasonOfAnswers promise.

If you haven’t seen the season 6 premiere of Pretty Little Liars and want to avoid spoilers then we suggest you stop reading now. If you have seen it and want to relive all of the action then keep reading.

At the end of the fifth season Aria (Lucy Hale), Spencer (Troian Bellisario), Hanna (Ashley Benson), Emily (Shay Mitchell) and Mona (Janel Parrish) found their way out of the bunker but realised they were still trapped by an electric fence. As punishment for their attempt to break out, A left them out in the rain, locking the doors so they couldn’t re-enter. The next morning the doors opened once again and the girls were gassed by A as they re-entered the bunker, apart from Mona who had a gas mask shoved on her face.

When they woke up the girls were naked on a morgue slab but relieved to see that A hadn’t harmed them in any way. Mona arrived to give them aspirin and started to act like Alison again. A chime went off to tell them to go back to their rooms but Mona tried to fight back. It didn’t work though and the five girls went back to their respective rooms for a surprise.

We’ve no idea what happened to them but when the action jumped to three weeks later all of the girls were shells of their former selves refusing to talk about what they’d gone through.

Ali’s got a plan

As a month passed since the girls had been taken, Alison (Sasha Pieterse) made a statement outside of her home to the press. She told them she wanted to be alone as she dealt with the difficult circumstances. It turns out it was all a big ploy to try and draw A out, who everyone seems certain is Andrew Campbell (Brandon W. Jones). With Tanner (Roma Maffia), Toby (Keegan Allen) and the police in her house, Ali received a call from a blocked number. It played a song she recognised and when the police ran a trace they found that the call had come from inside the house.

Ali was locked in the wine cellar whilst the house was searched. Toby found a mannequin dressed as A in Ali’s room, wearing a pig mask. A phone rang in its pocket and the sound of a pig squealing could be heard on the other end. Tanner went back to get Ali only to find a broken bottle of wine on the floor and Ali gone.

For her latest trick, Ali had teamed up with Toby, Caleb (Tyler Blackburn) and Ezra (Ian Harding) to make it look like A had taken her. Ali then headed out to the kissing rock with Caleb and Ezra where Ali thought A/Andrew would be waiting for her. Caleb gave her a pair of shoes with a tracker in so that he and Ezra could make sure she was safe. When they arrived at the kissing rock, Ali found a car with a pre-programmed route in it. She followed the directions, which took her to the outside of a park. The car cut out and Ali saw the petrol had run out so she pressed the button for roadside assistance. Instead she got A who told her what she needed was in the trunk of the car.

Another doll for the collection

The liars were told to go to Ali’s room to prepare for an arrival. In the room they found boxes of Ali’s things and realised that their friend was on her way to join them. They also discovered newspaper clippings about their disappearance and that Ali had been released from prison. In one box Spencer found a toy with the letters C.D. carved into them and Aria found a message from Mona in the back of the wardrobe, which said A was trying to kill her.

Speaking of Mona, she’d been thrown into a well and punished for her behaviour as Charles watched over her every now and again. Creepy.

Spencer had hatched a new plan and realised that there must be a way to get to Charles’ vault from one of the rooms in the bunker. She told that girls that the next time the generator shut off, they had to meet her in the day room as she believed there was a secret passage in there. As time ran out, the girls searched the room and Emily found a ventilation duct behind a cupboard. The four girls raced through and found themselves in Charles’ vault.

Around the room there were plenty of clues as to Charles’ identity and Spencer showed the girls the film she’d seen of Charles being referred to as Ali’s brother by Mrs DiLaurentis (Andrea Parker). Knowing A was watching, Spencer set fire to the film reel in a bid to try and force him to let them go. When that didn’t work they continued to set fire to items in the room causing the fire to spread quickly. Panicking that their plan may not work, Emily pulled down a curtain to smother the fire and found Charles behind it watching them. Then the door clicked open the girls escaped out of the room.

As they made a run for it they rescued Mona from the well and headed to the way out.

Ali switched her clothes as instructed by A after finding an old set in the boot of the car. She headed off on the path she’d been told to follow and Caleb and Ezra decided to follow her when the tracker stayed static. They managed to find her in the woods, and unbeknownst to them all Charles was watching their every move but the fire distracted them. The trio almost happened upon a vent where smoke was starting to billow out but they decided to call the police instead to tip them off.

The sound of Charles’ fire alarm drew them back to the vent and the soon realised they were near to the girls. They uncovered a door, unblocking it and ripping it open. Just as they did the girls ran out of the bunker and reunited with their respective partners just as the police arrived.

Spencer told Toby that their tormentor was Charles DiLaurentis and he answered back saying he knew that it was Andrew behind it. Are Charles and Andrew really the same person? Also note Ali’s reaction when she was asked who Charles DiLaurentis is. Does she know more than she’s letting on?

And the mystery girl is…

We haven’t forgotten about the mystery girl who was also shown to be in the bunker! She too escaped and it was revealed that she was Sara Harvey, the girl who disappeared at the same time as Alison. Has she been down in the bunker all this time?

Pretty Little Liars continues on Tuesday at 8/7c on ABC Family in the US and on Wednesday on Netflix in the UK. Preview the next episode of the season Songs of Innocence below: